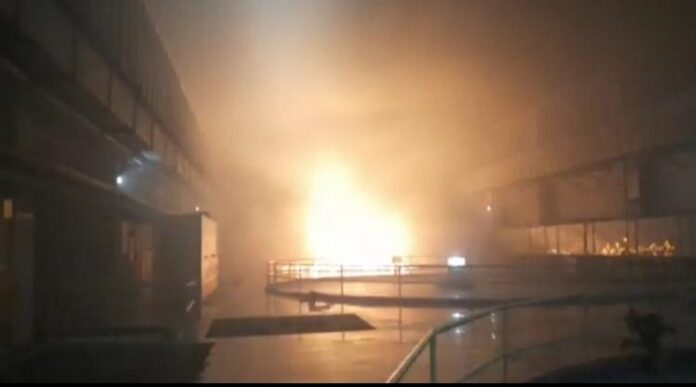 Fourteen hours after a major fire was reported at the Telangana State power generation corporation’s hydel power station at Srisailam, nine people who went missing are yet to be traced. The accident is reported to have taken place at around 10:30 pm on Thursday at the underground power plant in Telangana.

In videos that surfaced, a series of explosions were heard and staff could be seen trying to douse the flames using fire extinguishers. Initial reports indicate that a short circuit led to the fire and thick smoke engulfed the entire region.

Of the 17 persons reported to be present at the spot, eight staff members escaped to safety through a tunnel. Those trapped include six TS Genco employees and three private company employees.

Speaking to #KhabarLive, Nagarkurnool district collector, L Sharman, said that the fire has been brought under control, while the rescue operations for the missing persons are ongoing. “We are continuing our rescue operations for the nine missing staff, however, the entire place is covered in dense smoke and the rescue personnel is finding it extremely difficult to enter the area. The pumps that help in sucking smoke were not working until some time back because of a power outage.”

The official further said that the power connection has now been restored and the National Disaster Response Force (NDRF) team, consisting of 15 members, is en route from Hyderabad and is expected to reach by 2 pm.

Meanwhile, the fire department has the required equipment, and the team has entered the spot with great difficulty. However, they have been unable to find them so far due to low visibility. According to officials, massive lighting equipment of about 5000 watts and above has been brought in, but the team is unable to see beyond a few feet due to the thick smoke.

Reddy said that the mishap occurred in the first unit of the power station and four panels were damaged.

Power generation at the power station has been suspended following the incident.

The Srisailam dam is located across the Krishna river, which serves as the border between Telangana and Andhra Pradesh.

Meanwhile, Andhra Pradesh Chief Minister YS Jagan Mohan Reddy has canceled his earlier planned visit to the power plant due to the fire and has expressed his grief, and directed officials to extend help in the rescue operations. (Developing Story) #KhabarLive #hydnews