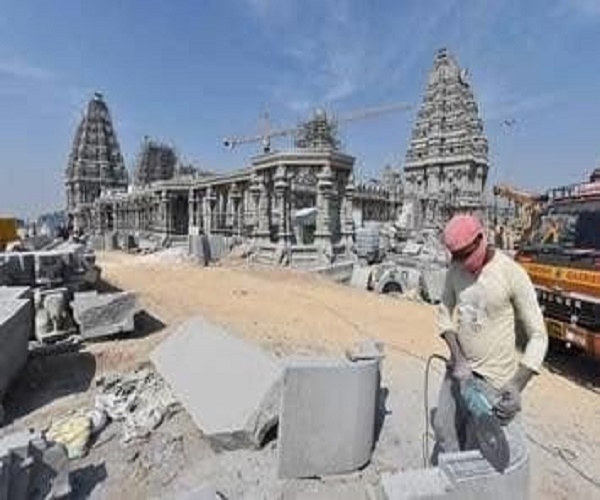 Among the theories on the origin of the monolithic Kailasa Temple in the Ellora caves is one that says aliens chiselled through the hill from the top to create the mammoth temple from a single block of stone sometime in the eighth century during the reign of Krishna I of the Rasntrakutas. .

Some 13 centuries later, on a dusty road leading to Warangal, a hill of granite is being sculpted into a temple, standing atop the small hillock of Yadagirgutta.

The new temple is the brainchild of a modern day ruler, albeit one who has been elected — Telangana Chief Minister K. Chandrasekhar Rao. Mr. Rao consulted the well-known Vaishnavite figure Chinna Jeeyar Swamy for the temple, dedicated to Lakshmi Narasimha Swamy, while film set designer Anand Sai designed it. The State government has allocated ₹250 crore for the temple in the current budget. It had allocated ₹100 crore over the last two budgets taking the total allocation to ₹450 crore.

“By March, the temple will be ready to welcome pilgrims,” says G. Kishen Rao of Yadagirigutta Temple Development Authority.

Yadagirigutta, a 1.5 acre plateau, was home to a small cave temple dedicated to Narasimha and a rock with a carving of Hanuman. “It was a small temple which people from Hyderabad visited on Saturdays and other festive occasions and returned home by evening.

There was hardly any queue of pilgrims and very few amenities. Now, we are waiting for the main temple to open,” says Vijayalakshmi, a devotee from the village, offering prayers at the adjacent makeshift replica of the new temple.

The new temple now sprawls over four acres on a platform constructed of reinforced concrete piles rising from the base of the hill. A road is being laid to accommodate the expected traffic.

Inside the cavernous mandapam (temple coutryard) leading to the new cave temple, a cloud of stone dust hangs in the air as the shrill noise of drills and saws echoes, drowning out any conversation.

But S. Sounder Rajan, the sthapati or sculptor, who has executed the colossal structure is a man possessed, and doesn’t let a few drills stifle his passion.

“This is one of the biggest temples in the country carved in granite, with the rajagopuram (pyramidal tower at the entrance) being a seven-storied structure. I have had to race against time though the engineers believe that this can be done in a jiffy. This is granite, not RCC! It takes time to cut, chisel and shape. I made 1500 plans over one year and eight contractors were employed to execute the work,” says Rajan, standing in the cloud of dust.

ALSO READ:  'Gulli Cricket' - A Fervor For A 'Sport Heralds' From The Streets Of Hyderabad

His team of deputy and assistant sthapatis share his enthusiasm and add to the story of how the colossal temple is taking shape.

Work on the new temple began in October 2016 and a replica of the cave temple was made for pilgrims to offer prayers.

“The original cave temple of Narasimha Swamy and the rock with a carving of Hanuman have not been touched. Everything else is new,” says Sanjeeva Kumar, a deputy sthapati who has trained in temple architecture in Tirupati.

“The Kakatiya temples are known for their exquisite work where a paper can pass behind a dancing figurine. We have tried to do the same with many sculptures having designs where even a palm can pass through it,” says Kumar.

In the race to finish the temple there have been a few accidents. Five craftsmen lost their sight when the blade of the cutter splintered, sending pieces of metal all around. Other workers have suffered injuries to their arms, according to officials at the site.

“There are risks. But we have to work. I like to work on something that people say will last for a long time,” says Murugesh, a craftsman from Tiruchirapalli, speaking in halting Telugu. For Shaikh Rabbani, all work is worship. “We are working on the rajagopuram. Working at a height of 50 feet is tough but I come from a family of craftsmen. My father and grandfather too worked on carving temples, so this is nothing new for us,” says Rabbani, who hails from Guntur, and speaks chaste Telugu.

According to Rajan, 2.5 lakh tonnes of granite from a hill in Gurjepally in Praksham district have been transported to Yadagirigutta to build the temple. In other words, a 9.4 sq kilometre mountain has been moved to create the temple. In the process, a 30-tonne monolithic block has been transformed into a 15-tonne image of Alwar (a Vaishnavite saint). There are 12 statues in various positions inside the mandapam, which is 202 feet long, 103 feet wide with 36-foot high walls.

“The temple had a gold sudarshan chakram as the finial. By March, it will again be back in position over the vimana (tower over the sanctum sanctorum). The main gopuram will have a two mm gold plating weighing 700 kilos which is estimated to cost about ₹70 crore and will be ready soon,” says Kumar. #KhabarLive