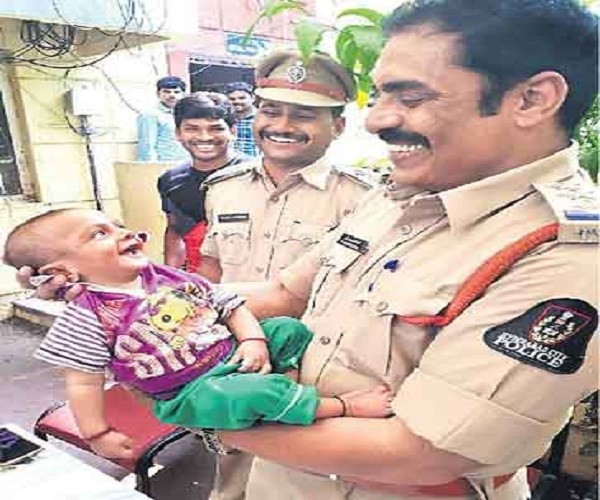 Aided by technology, visionary approaches, novel initiatives and Good Samaritan stories, the image of police in the State is changing for the better. Can we forget a time when the word ‘police’ sent a chill down the spine, whether or not you were on the wrong side of the law?

Such was the fear triggered by the combination of khaki, lathi and a handlebar moustache, not to forget the potbelly, the menacing stare and the flurry of abuses for no reason whatsoever.

Things have changed, or are changing. For the good. And it is not just the dialer tone on mobiles of cops, which welcome callers to ‘the people-friendly police’ that denotes the change. The entire approach to policing itself is undergoing a metamorphosis in Telangana.

Assisted by technology, aided by some visionary approaches, and supported by a proactive government, the image of the police is now gaining a professional touch. The current emphasis is on being friendly to people, help the public do away with the fear that has kept them away from approaching policemen for help, and also to use the bridges of friendship for better policing.

At the same time, the black sheep are still around. Be it the senior officer in Begumpet who slapped a woman suspect, or the Sub-Inspector who abused a complainant who had approached the police for help in a civil dispute, solitary instances that trigger memories of the police of yore keep cropping up.

On the other hand, policemen themselves are playing a major role in the image makeover, with Good Samaritan stories involving cops, once a rarity, now regularly going viral on social media.

Right from dropping intermediate students in a police vehicle at their examination centre after their bus broke down, to the story of Inspector Mahesh, who rushed a grievously injured boy to hospital and paid for his treatment, or the two Traffic Police personnel who administered CPR to an elderly man who had a cardiac arrest and saved his life, the good hearts hidden behind the khaki are also now in focus.

According to experts, the gradual change could be attributed in part to the recruitment of qualified persons who were also taught the art of maintaining friendly relations with the public.

Constables are no longer those who had barely seen college. Tech-savvy BTech graduates, suave MBA degree holders and their ilk are now part of the constabulary. The potbellies too are slowly disappearing, and being replaced with fit physiques and even six-packs. Many young constables are those who take the khaki seriously and wear it with pride.

There are changes in other quarters too. The practice of collecting money from business establishments under the police station limits to buy everything from pen to paper for the station has been done away with the State government providing Rs 25,000, Rs 50,000 and Rs 75,000 per month, based on their status, for maintenance of police stations.

The reception centres at police stations in the city and its suburbs are also new, with a woman constable posted at every centre collecting details from those visiting the police station for help. The growling sentry sporting a twirled moustache and a rusting bayonet-fitted .303 rifle is a ‘thing of the past’ now.

“The Telangana government has achieved success in not only maintaining law and order effectively but also in improving the image of the department by providing necessary infrastructure,” says Forum for Good Governance Secretary M Padmanabha Reddy.

“The department has delivered goods by leveraging technology in all fronts. However, stern action should be taken against those who are involved in corrupt practices or fail to meet expectations of the department,” he adds.

People-friendly policing goes much beyond being friendly and polite to the people. Retired police officials, who pioneered the concept in Hyderabad, say more public contact programmes are the need of the hour to bridge the gap between the people and the police.

During the mid-90s, the North Zone police introduced public contact programmes wherein the staff of the police station concerned would organise meetings with colony residents to know their problems. Besides this, orientation classes were conducted for the police personnel at the North Zone Learning Centre. Former Assistant Commissioner of Police (Mahankali Division) Peddireddy Tirupati Reddy used to conduct these classes for the staff in batches, explaining about human rights and what people expect from them.

This initiative helped the department in changing the thinking perspective of its personnel, resulting in improving the department’s image. “We have taken policing to every colony to solve people’s problems,” Reddy said. Guest lectures were organised at the learning centre involving retired Director Generals of Police and other senior officials.

Another initiative taken at that time was to allow a constable to stay in a densely populated area in the police station limits to develop contacts with the people. He would gather information and share it with the station house officer. This helped in averting many major incidents.

Police Commissioners, who previously worked in Hyderabad, introduced various initiatives like constitution of ‘Maitri’ committees for better coordination between the police and locals. Police sub-controls were established at strategic locations and junctions to ensure visible policing.

Over a period of time, these concepts faded into oblivion as priorities changed.

Vexed with increasing incidents of high-handed acts by some personnel, the department has come up with a four-pronged training module to make policemen shun arrogance and bring about behavioural change. Senior officials evolved the module to train the staff right from police constables to Additional Superintendents of Police.

A separate learning centre was also established at the office of the Director General of Police to conduct classes for the staff on a regular basis. The module has been designed covering key aspects of policing, especially on how to respond to those visiting the police station along with the role of beat constables.

The module also focuses on how to use technology to effectively tackle crimes. The necessary tools available to deal with the cybercrimes and advantages of Crime and Criminal Tracking Networks and Systems (CCTNS) project would also be made familiar to those attending the programme.

Priority is also being given to improve soft skills, changing behavioural pattern while interacting with those visiting the police station, listening to and writing petitions received at the police station, etc., under the four-pronged training module, Reddy said.

He added that a petition received from the complainant would be the first document to start the investigation.

The module contains a separate session for constables attending court duties. “We are explaining to our court constables on how to interact with witnesses, public prosecutors and court staff,” he said. #KhabarLive