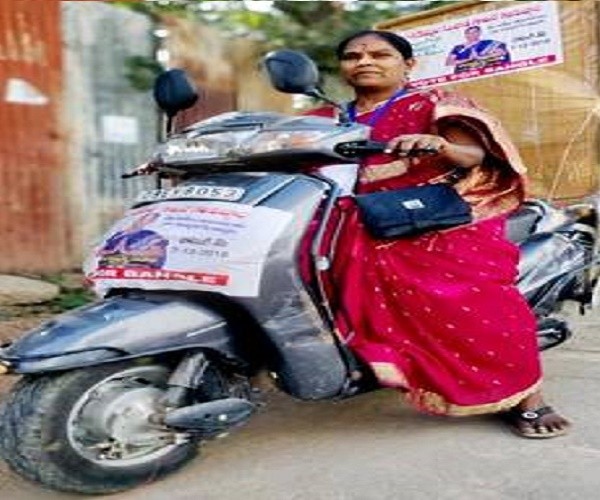 Independent candidate goes around alone. Not many take her seriously as the woman riding a two-wheeler seeks vote for her from the Malkajgiri Assembly constituency.

The lack of response from onlookers does not deter R. Sujatha, contesting as independent. Unlike other contestants, she does not have a single supporter beside her. Barring her two-wheeler, there is no other vehicle following her either.

She is all alone in the election campaign. Her only companions are the mini-public address system and a cardboard hoarding with her election poster on it. The woman in her early 40s, clad in sari, doggedly appeals for votes, not disappointed by the little or absence of response.

“I tried to rope in some to accompany me but realised that I need to pay at least Rs. 300 a day to each of them besides food,” she explains. Even her husband does not accompany her in the poll battle.

“If he comes for campaign, I cannot get money even for petrol to run my two-wheeler. With much difficulty, he gave me Rs. 10,000 to file the nomination,” she says. Her two daughters — one in Inter first year and the other in ninth standard — stay back home for their studies.

ALSO READ:  This Indian Bride Stitched Her Love Story On Her 'Bridal Lehenga'

An MLA can serve people in many ways, be it regarding overflowing drains or bad roads, she believes and wants people to give her an opportunity. #KhabarLive