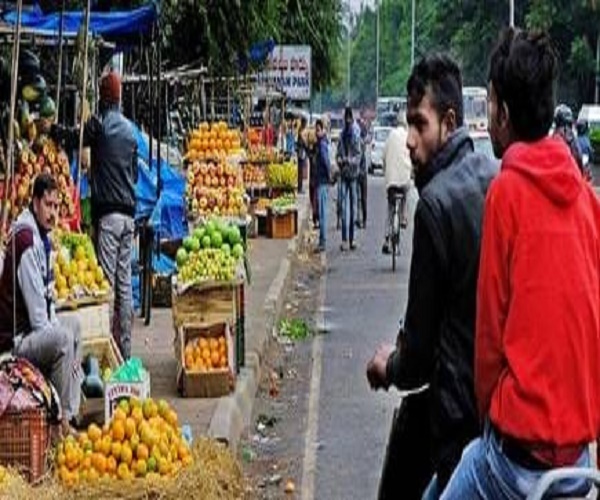 Traffic goes haywire as motorists suddenly halt by the pop-up shops. Every weekday morning, a traffic constable reaches the small temple near Bapughat on the Shankarpalli-Hyderabad road. He parks his vehicle and begins photographing two-wheeler riders riding on the wrong side, without helmets, and cars parked near the temple. Sometimes, the vehicle owners stop and chat up the constable, pleading for leniency but without success.

A little distance from the constable lies a footpath that is now completely occupied by fruit vendors. Car owners and two-wheeler riders slow down suddenly, or stop to pick up the attractively stocked fruits.

This sends traffic haywire as the vehicles have to move to the faster inner lane to prevent tailgating the vehicles ahead of theirs. In the peak evening hours, the situation becomes chaotic in the stretch beginning at NTR Statue till the Tipu Khan bridge on the Shankarpalli Road.

“Yes, we are aware of the problem. We will get them removed,” said a police official of Toli Chowki Traffic Police Station, when asked about the traffic problems.

A similar situation prevails on the Mehdipatnam Rythu Bazaar to Rethi Bowli stretch, Ring Road Junction to Hyderguda, Falaknuma Crossroad, Patny Circle and countless other locations in the city.

While footpaths seem to be a lost cause in Hyderabad, the illegal pop-up fruit markets are proving to be more dangerous due to the unpredictability of their locations. The road stretches narrow down due to the footpath encroachment and slowing vehicles.

“We have no choice. There is a lot of competition in Mehdipatnam and that’s why I moved here. Now, there is competition here too. On festive days, I do good business due to this temple but on other days, business is just about average,” said Akram, who sells fruits near Tapovanam Park near Langer Houz. Many of the hawkers near Hyderguda say they work for a ‘seth’, who tells them where to park their pushcart, and that they get a fixed salary at the end of the day.

Earlier, the footpath between Ramdeoguda and Langer Houz was used by soldiers, athletes and fitness conscious citizens for jogging in the morning. But now with fruit vendors taking over the place on a permanent basis, the tiny stretch for jogging has been lost. #KhabarLive