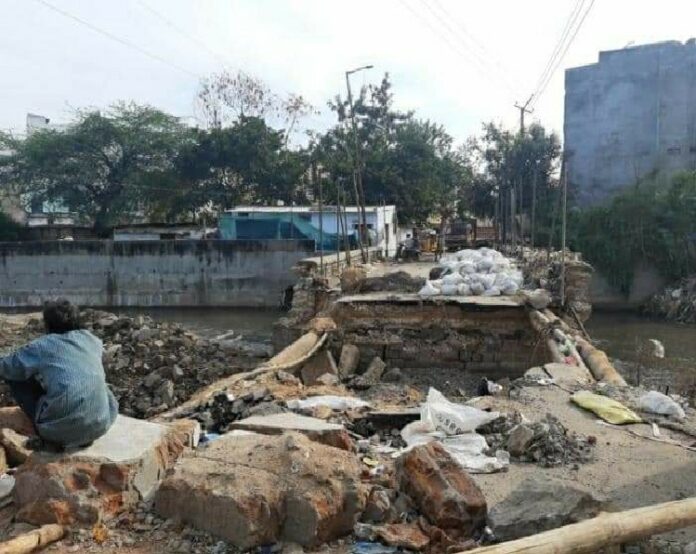 Many residents of the wards in Hyderabad municipal corporation limits says, civic issues take time to get resolved and feel that Azampura is poorly maintained compared to neighbouring wards. They are fed up with AIMIM rule and need a change of leadership.

It took Mohammad Imran two months of complaints and lobbying with the Greater Hyderabad Municipal Corporation (GHMC) to get the manholes fixed in Azampura ward number 28 of Hyderabad’s Old City. “They began the work this week as the elections are on December 1, or else it’d have been delayed further or they would’ve never responded,” says the man, who is in his mid-40s and runs a store in the locality.

“Compared to neighbouring wards like Old Malakpet, our ward is a garbage dump. It floods even with the slightest of rain and was impacted in the October floods. It’s one of the most poorly managed wards of the All India Majlis-e-Ittehadul Muslimeen (AIMIM), but they will win the municipal elections again, there’s no doubt about it,” Imran opines.

In the October floods, the Tark-e-Muskarat bridge connecting Azampura to Dabeerpura gave way. “The bridge is now shut and we have to take a 20-minute detour to get to that part of town. They haven’t started the repair work yet,” points out Imran, who says he will vote for AIMIM despite being unhappy with the party’s performance. “Whatever happens they will only win, I don’t want to waste my vote,” he adds.

Residents of Azampura ward, a stronghold of the AIMIM, say they don’t have a proper community hall nor do they have a library or a park. Getting any civic issue resolved with the GHMC takes time and requires a push from the husband of local corporator Ayesha Jahan Naseem. Often requests and complains go unheeded for months.

“You can get things done only if you know people in the AIMIM, so most locals here become party workers for building clout and getting their work done. Even I’m associated with a political party even though I’m not into politics. You see, I have a shop to run,” adds Imran.

59-year-old Mubeen does not have much faith in the AIMIM either. He says that Azampura, unlike neighbouring wards like Chawni, Dabeerpura, New and Old Malakpet, is poorly managed. “The corporators there have taken great effort to beautify their wards, level the manholes, set up CCTV cameras. We don’t even have a park here for the children nor do we have any footpath for senior citizens to go on morning walks,” the senior citizen says.

The Azampura chaman roundabout on Sahifa Masjid Road has a park in the centre but it lies in neglect. The footpath of the park has been encroached by vendors, the inside of the part is littered with garbage and empty liquor bottles. “It’s unsafe to walk there at night,” says 21-year-old Shafidha. “People sit and drink there at night. The local corporator knows about this, he has to pass through the road to go to his house but hasn’t done anything about it,” she adds.

The Sahifa Masjid Road, which connects Chaderghat Circle to Subedar Ameer Khan Road, is a lifeline for the local residents, but the road narrows down at Azampura chaman roundabout leading to a Rail Under Bridge. “The road is used by thousands of people on a daily basis, but the surroundings of the underbridge is used as a garbage dump. The corporator, the MLA, everyone passes through here but they haven’t done anything about the garbage dumping,” says an angry Imtiaz, who has a shop close by.

“When it rains all the garbage flows into the Musi river nala and it gets stuck and chokes the sewerage lines. They pick up the garbage every morning but haven’t shifted the location of the dump despite several requests. Have you seen how the Old Malakpet corporator has beautified the Chaderghat Circle? He is also from the AIMIM, but why haven’t they done the same here?” he asks.

The corporator seat for Azampura is reserved for women. Though the corporator is Ayesha Jahan Naseem on paper, all posters and campaign promotions are carried out in the name of her husband, Shaik Mohiuddin Abrar.

“Hum ko bas humara kaam honeka,” (We just want to get our work done) says Lalithamma, a GHMC sanitation worker who lives in MCH Colony in Azampura. On Tuesday afternoon, the 45-year-old was helping the AIMIM organise the Hindu community residing in the colony to attend the party’s road rally. “Our colony votes will go mostly to the AIMIM,” she says, while heaping praise on the AIMIM corporator for being respectful and responsive to the needs of the community.

“They expanded the drainage pipeline to solve our overflowing sewage problem. The roads inside our colony were also being laid but the work was stopped due to the lockdown in March. The corporator has assured us that the work will begin after the elections,” says Lalithamma. “They completed the community centre which was earlier left unfinished. An Anganwadi operates there now, where our children can stay while we go for sanitation work,” she adds.

Outside the colony, not everyone shares Lalithamma’s views on good local governance by the AIMIM and she is aware of it. “I was a party worker for the TDP, then the Congress, the TRS and now the AIMIM. Other parties don’t show up at our colony after we vote for them, but the AIMIM people have been responsive to our needs and so we vote for them,” she adds.

The votes of Azampura’s Hindu community are divided mostly among the AIMIM and the TRS. The residents here are well aware of the BJP’s efforts to win them over. “But who is their candidate for Azampura? Has this candidate visited us?” asks Rahul, another sanitation worker and resident of the colony.

“They come to us asking for votes during elections but don’t show up afterwards. We’re the ones living here with overflowing sewage and we’ll vote for those who help solve our problems all through the year,” he adds, while stating that the Hindu community in Azampura will not vote for the TRS candidate. “The Home Minister Mahmood Ali is our neighbour, he grew up in this ward but hasn’t visited us even once after becoming a minister. He’s of no use to us,” Rahul says.

The only rival for the AIMIM in the ward is the Majlis Bachao Tehreek (MBT) party and on Tuesday, the party spokesperson Amjed Ullah Khan was out campaigning for his wife who is contesting the polls.

As the procession inches on, Imran says watching from the sidelines, “He’s a good leader but his party won’t win the polls. The colonies with a majority Mahdi community which supported the party and helped them win before was broken up and added to neighbouring wards during the reorganisation of wards. That was done by the TRS to ensure that there’s no competition for the AIMIM,” he alleges.

All 150 wards in Hyderabad go to the polls on December 1. #KhabarLive #hydnews