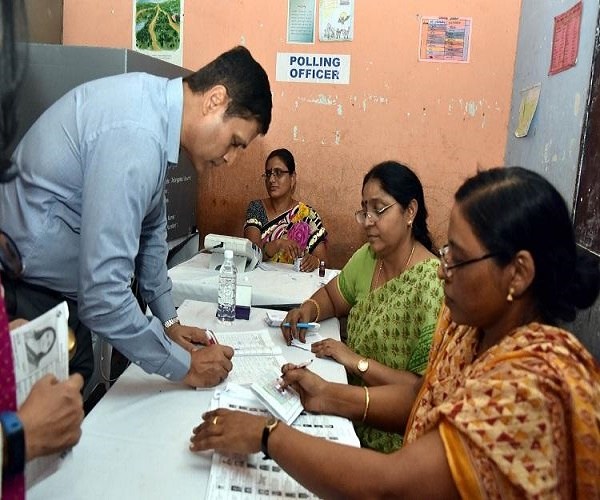 Several complaints across Hyderabad to #KhabarLive about the missing names of voters who voted recently in Assembly elections.  Sayed Naeem, a voter from Faluknuma under the Chevella constituency in Telangana, as well as 14 other members of his family, were unable to cast their vote in the Lok Sabha elections. Many agitated voters in Charminar, Rajendernagar, Tolichowki, Secunderabad, Musheerabad and Amberpet areas complained about their missing names.

This, the family says, despite verifying their names in the electoral rolls two days before the elections and even getting text messages from the Telangana Election Commission requesting them to cast their vote in the polls.

The family is not the only one, numerous voters across Hyderabad have come forward with complaints about not being able to cast their votes. Many of them had voted in the assembly polls in December 2018. Then too, many voters from Hyderabad had found their names missing from the electoral rolls.

ALSO READ:  When An 'Orange Parachute Suddenly Dropped From The Sky In Vikarabad Area... Astonished Residents To Know More

“My family has been residing in the same address for over 30 years and we voted in the state elections last year. We checked our names in the electoral rolls a few days ago, we even got a text message from the Telangana Election Commission with details of our polling booth asking us to come and register our vote. But when we came here today the polling agents say our names are not there in the electoral rolls. How is this possible? Who do I go and complain to?” asked Sayed.

Another voter, Mohammed Waseemuddin, could not register his vote at the poll booth in Asmangadh; his wife and father, however, could vote. Waseemuddin, too, had voted in the state polls but now found his name missing from the electoral rolls.

Shobhana Kamineni, the Vice Chairperson of Apollo Hospitals, also found her name deleted from the voter list at the Masab Tank polling booth.

Shobhana is the sister of sitting MP from Chevella, Konda Vishweshwar Reddy who is now contesting on a Congress ticket. In her video address to media, Shobhana said she felt cheated after finding out that her name is not in the electoral rolls.

Shobhana said she was travelling abroad and came back to India to cast her vote at the same polling booth where she had exercised her electoral right for the state polls. She said that the deletion of her name from the voter list was a crime against her as a citizen.

“This is the worst day for me as an Indian citizen. I came to the booth and I was told my vote is deleted. Am I not an Indian citizen? Am I not counted in this country? Is not my vote important?” Kamineni said, in a video message uploaded on social media.

After the state polls held a few months ago, the Telangana Election Commission was criticised by the public after many voters, some high profile government officials and sportspersons, were unable to vote after their names went missing from the electoral rolls. The Chief Electoral Officer, Rajat Kumar had even issued a public apology after the lapse. In January, the state EC had undertaken a review of the electoral rolls post the fiasco.

Attempts by #KhabarLive to contact representatives from the Election Commission have been unsuccessful. #KhabarLive