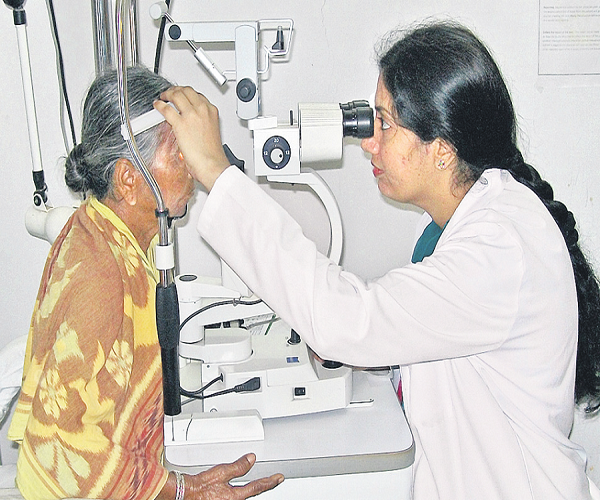 The massive eye screening drive, in addition to providing healthcare services, is being planned in such a way that it will facilitate health authorities to ascertain the accurate disease burden of visual impairment in the State.

A major factor that influenced authorities to decide on a massive eye screening camps across Telangana was the prevalence of significantly higher burden of eye-related ailments among adults and children in the State.

The massive eye screening drive, in addition to providing healthcare services, is being planned in such a way that it will facilitate health authorities to ascertain the accurate disease burden of visual impairment in the State.

During the eye screening drive of eligible population, ailments will be identified and corrective measures like issuing glasses would be initiated, officials said. Afterwards, if needed, corrective surgeries would be taken up at a later date in an advanced State-run eye care centre.

As part of the screening, health authorities will utilise the services of 200 fleet of 102 ambulances, which are already operational under Amma Vodi scheme and also rope-in over 300 officials from Rashtriya Bal Swasthya Karyakaram (RBSK).

Public health officials said Telangana had a pretty high disease burden of vision impairment. According to recent statistics from 31 districts collected by Society for Elimination of Rural Poverty (SERP), Department of Agriculture, there were a whopping 81,931 adults with visual impairments in the State while more recent studies by other State-run agencies had roughly put the figure at 85,000 adults.

The prevalence of eye-related ailments among children is also relatively high in the State, another reason that forced the authorities to opt for massive eye-screening drive. According to the recent RBSK statistics, of 20 lakh children screened in Telangana, 20,000 children had vision impairment, retinopathy of prematurity, congenital cataract and Bitot Spot in the eyes caused due to Vitamin A deficiency.

In-line with the guidelines framed in National Health Policy (NHP) and National Programme for Control of Blindness (NPCB), the authorities are planning to set-up eye screening camps with seven stages.

The medicines needed to treat certain eye ailments, providing glasses to rectify eye-defects and even conducting corrective surgeries and cataract procedures will be provided free of cost. #KhabaqrLive