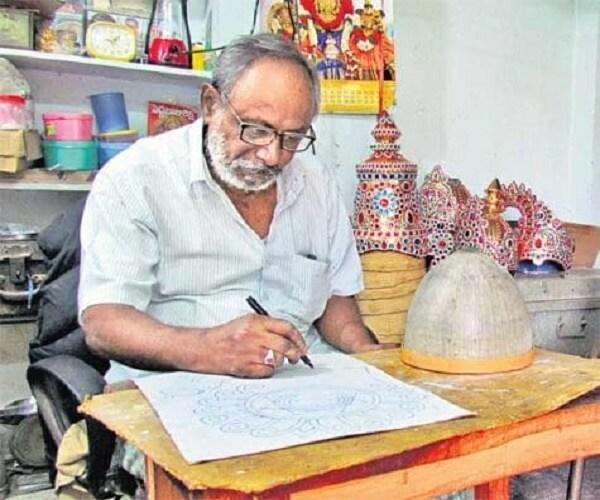 When you talk about theatre, especially of the mythological and folklore kind, the first thing that comes to your mind is artistes with their heavy jewellery – especially those who don the roles of god or goddess, king and queen and other mythological or mythical characters.

But, do you know where do you get ornaments from and who is the one who makes them? If no, then it’s time to meet someone who was into this field for the past 40 years – city-based Sindhe Mohan who is also known as ‘Kiritala Mohan’.

“I started this profession in 1979 when my son was born. But, before getting into this, I worked in Surabhi theatre like a table player, and I used to observe my wife performing onstage and notice there is something missing in her jewellery. Then, I went to a store and purchased pearls and stones and worked on it, and made a beautiful necklace and gifted it to her,” shares Mohan who has also done wedding decoration set with stones and pearls.

Theatre artistes in the field started noticing the jewellery and began asking Mohan to make similar things for them too. Of course, it was more of women artistes who asked for this weightless jewellery.

“Though I started it with passion, later it turned out to be a profession for me. I started only with ornaments for women initially,” says Mohan, whose art work got popular with time and so he started working on coronets as well.

One necklace changed Sindhe Mohan’s life “Performing the art wearing a coronet is not that easy as the artistes need to dance sometimes depending on the demand of a role they are playing. Half of their concentration would be on the coronet and ensuring it’s in place. So, I thought of making weightless coronets which would be easy for them to perform with. And I am very particular about the colour which I use in my ornaments. I only use three colours for all my jewellery – it’s 80 per cent white and 20 per cent red and green to make any piece of jewellery,” says this talented jewellery curator.

Mohan’s collection is also exported to various countries. He supplied his collection to the USA, Australia, etc. “I’ve supplied my creations to many places in India, especially to Karnataka. I was more happy and satisfied when I supplied my jewels to Mandya village in Karnataka where my collection was selling like hot cakes. Within a few hours, they would get sold, which helped build my confidence more and started working on different kinds of jewellery later,” he shares.

Mohan used to travel to different places to supply his collection. He hired six women to work for him thus giving employment to homemakers “which makes them too more confident”. He says that women work better and focus more when it comes to jewellery. “It’s pure passion which made me run this business from so long; concentration is something that is much needed to make the kind of jewellery I make,” says Mohan whose collection is used in ETV serials and also in some movies.

“It gave me more satisfaction as I love to improve myself and curate better collection. I also feel proud that I’m the only person doing this in India,” claims Mohan. #KhabarLive