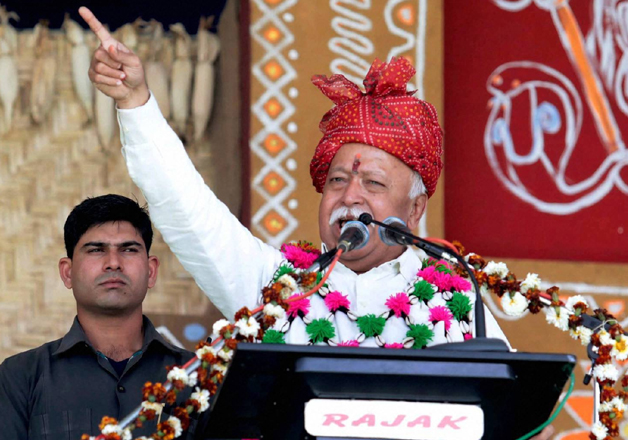 The RSS clarification effectively said that the outfit’s chief did not insult the Indian Army, merely the Indian people.

Mohan Bhagwat may be known as second-most powerful person in India, or sometimes even even more powerful than that. But that doesn’t stop him from sticking his foot in his mouth every once in a while. During the Bihar elections in 2015, many believe it was Bhagwat’s comments about reservations that dashed the Bharatiya Janata Party’s hopes of a majority in the state.

On Sunday, the sarsanghchalak or chief of the Rashtriya Swayamsevak Sangh seemed to compare the organisation’s cadres to the Army, saying that the Army would take six months to prepare for a fight, compared to just three days for RSS workers.

On Monday, the RSS issued a clarification. Sort of. Manmohan Vaidya, a senior leader who heads the RSS’ communications team, put out a statement saying Bhagwat had been “misrepresented”. Vaidya insisted that the RSS chief was not insulting the Army while praising RSS cadres. Instead, he claimed that Bhagwat said that members of the RSS were much more disciplined than other Indians.

In other words: we didn’t insult the Indian Army, only the Indian people.

“It would take six or seven months to prepare the army,” Bhagwat said, although since the language doesn’t have articles he could also have meant “an” army. “The Sangh’s workers will take three days to get ready. This is our ability.”

Those are both central ministers, Kiren Rijiju being the Minister of State for Home Affairs, and Jayant Sinha, the Minister of State for Civil Aviation. Neither, it is important to note, were members of the RSS earlier in their political lives. As such it is evident that they have come out in support of Bhagwat’s words because of the explicit connection between the BJP-run government and the RSS leadership.

ALSO READ:  ‍Why TRS Stressing On ‍'Delimitation Of Telangana Assembly Constituencies' From 119 To 153?

The political ground in India has shifted so much in the last few years that it is now par for the course to see union ministers, even ones unconnected with the Sangh, acting as the spokespersons for a group has been banned by the Indian government three times since Independence.

In the aftermath of the BJP’s big defeat in Bihar two years ago, a few party leaders did come out and admit that Bhagwat’s comments on reservations had played a role in turning voters against them.

Despite the RSS chief’s latest remarks coming at a time when the Indian Army is facing terrorist attacks and constant ceasefire violations in Jammu and Kashmir, the party and the government is out defending Bhagwat’s comments. Will the party eventually have to admit that this too was a misstep? #KhabarLive