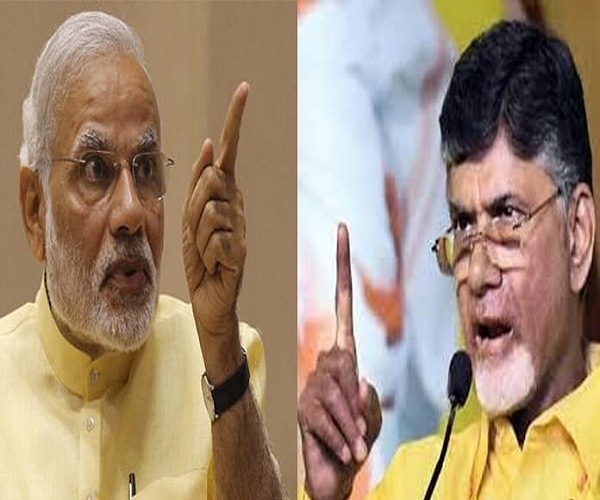 The BJP, today, stands at the crossroads. The way political scenario is unfolding, it appears that the 2019 general elections in north may be NaMo Vs RaGa but in Andhra Pradesh, it is going to be NaMo vs Nara.

But now it seems that the government is unable to hear Desh ki Pukar which says Mardala Mehangai. The Prime Minister, who will continue to be the BJPs face in the ensuing elections, is preaching many things but when it comes to practice, he is not following it. Good things are only to be told, not practiced more so in the political battlefield appears to be the funda. The BJP is not focussing its attention on what happened to Nayi Soch and Nayi Umeed and to what extent they have been able to fulfil it.

In Andhra Pradesh, the situation is getting murkier by each passing day. While it is but natural for the TDP to invoke the name of NTR and Telugu pride, Narendra Modi too seems to be trying to harp on it. But the BJP should understand that Special Category Status has become a major sentiment and the way Modi makes fun of this issue directly or indirectly would only cause greater damage to the party.

Modi should also take note that it is not only Andhra Pradesh which is accusing the Centre of non-release of funds. Even the working president of TRS K T Rama Rao said the Centre only praised our work but did not help financially. Modiji’s recent video conferences instead of giving a route map to face the opponents in the political battlefield are resulting in inciting more trouble.

Interestingly Modiji gives gyan bodh to his party workers that political interests and lust for power should not be there. Politicians should have the passion to work and people in power should not be desperate to save their power. Sounds music to ears. But then, can the BJP or any political party for that matter say that they have no lust for power?

ALSO READ:  Kaleshwaram, An Icon Of Developmental Tourism In Telangana

Can the BJP say that Rafale cannot cause any damage to its image? In ‘Bofors’ case, accusations of corruption in high places were backed by scepticism over the quality of the Bofors gun, a factor missing when it comes to the Rafale jet fighter. But because there are allegations of an underhand element in the deal, the issue could still resonate.

Asking the State party workers to harp on the slogan of backstabbing after 23 years is something that sounds ridiculous. Being a senior politician and the Prime Minister, he should have shown greater maturity in making such comments. Yes, NTR was opposed to the Congress because they had hurt the sentiments of Telugus.

Three decades down the lane, it is the BJP which is now hurting the sentiments of the people of residual State. It is the BJP which took U turn on Special Category. In the battlefield, enemy’s enemy becomes friend. That’s what all political parties including the BJP do.

Prime Minister says people in high positions should not indulge in barbs, but he does the same thing. He has no hesitation in calling others as thieves and backstabbers. He also says that only those who are nervous of losing power and feel insecure and have poor governance give vent to their anger and that is what Naidu is doing now.

But if one applies the same analogy to the Prime Minister, the big question is why does he talk of someone whether it be Naidu or Mamata daydreaming of becoming Prime Minister? Why does he try to rake up the sentiment of serving Bharat Mata? The 2019 elections thus put great responsibility on the people in electing the next lot of rulers. #KhabarLive