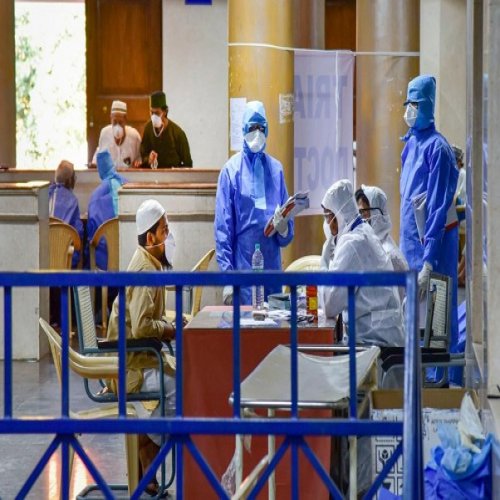 The official apathy towards Covid-19 patients makes the life hell before they get admitted in the hospital the Ordeal began when the Covid positive patient had to first struggle to get an ambulance from a private hospital, and then he was made to wait in the covid designated government hospital.

As details shows, Mohammad Zia Ullah Mehdi was tested positive for coronavirus around 6 pm, while admitted at Thumbay hospital at Chaderghat in Hyderabad. He was struggling to breathe, and had to be transferred to Gandhi hospital within the city, the nodal hospital dedicated to COVID-19 treatment in the state. But the patient transfer, which should have been a barely 30-minute process, took over six hours as ambulances were not ready to ferry a COVID-19 patient.

Further, even after getting admitted to Gandhi Hospital, it took more than a day for the hospital doctors to pay him a visit, the patient alleged. Mohammad’s family members – his father, spouse and child – also tested positive for coronavirus.

The ordeal and agony began when Thumbay, a private hospital, refused to provide the Mohammad with an ambulance, says Amjed Ullah Khan, spokesperson for Majlis Bachao Tehreek (MBT) party, who was contacted by the family on Tuesday morning around 2 am, seeking help to arrange an ambulance,

ALSO READ:  Ola And Uber Cab Riders Are Fed Up Of 'Surge Pricing' And 'Driver Cancellations' In Hyderabad

“The private hospital had two ambulances but they were asking the patient to arrange for their own vehicle, despite the patient struggling to breathe. The family does not have a four-wheeler,” says Amjed who then reached out to the Hyderabad police who were also unable to help arrange an ambulance.

“None of the ambulance services were ready to take the patient from Thumbay to Gandhi hospital,” says Amjed who added that there was also a confrontation at the private hospital regarding payment.

“The private hospital initially charged Rs 10,000 for admission but charged another Rs 12,000 as it was a COVID-19 case. The hospital reasoned that the patient was kept in their isolation ward and so the costs were higher. I finally reached out to the GHMC helpline number, and they sent an ambulance,” he adds.

Gandhi Hospital is the designated hospital for COVID-19 in Telangana’s efforts to contain the spread of the disease. Samples from patients at private and other government hospitals are also sent to Gandhi Hospital for tests.

Mohammad, who was struggling to breathe since Monday, was finally brought to Gandhi hospital past 3 am – but no duty doctor or nurse came to treat him. “They just left him on a bed without even a bedsheet,” alleges Amjed.

In a video that went viral on social media, Mohammad said, “Am admitted to Gandhi hospital and am COVID-19 positive. Came to the hospital at night past 3 am, no doctors have come to see me, it’s difficult to breathe. No one is here to see me, someone please help me. The staff say go and sit on the bed, no idea what to do, what kind of service is this? I am finding it difficult to breathe and am unable to speak.”

The video was shot and Amjed alleges that no doctors came to visit the patient all through Tuesday. “The doctor met him only on Wednesday morning and asked him to get a CT scan, but the CT scan machine at Gandhi wasn’t working,” Amjed adds.

Three more members of Mohammad’s family tested positive – his 55-year-old father Mohammad Sajjad, his spouse and child. “The old man was also made to wait for over nine hours at the hospital for a CT scan on Wednesday. I reached out a few ministers and several others highlighting this issue but no one has responded,” adds Amjed.

The superintendent of Gandhi hospital was unavailable for comment when #KhabarLive reached out.

Later, speaking to #KhabarLive, Dr Shankar, the superintendent of the fever hospital consulting COVID-19 patients at Gandhi hospital, said that the patient was diagnosed with bilateral infiltrates in both the lungs and shifted to the ICU. The doctor said the patient’s condition was stable and was being monitored closely. #KhabarLive #hydnews