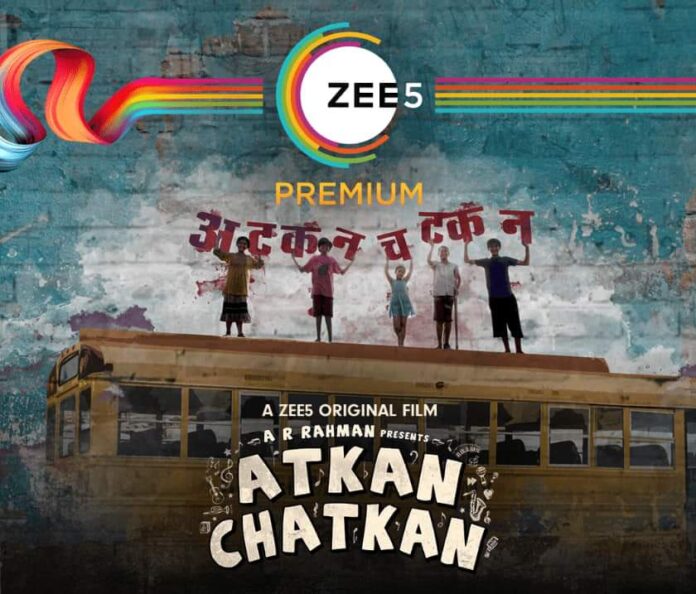 India’s largest streaming platform ZEE5 recently released the original film ‘Atkan Chatkan’ and the musical has been receiving immense love from media and fans alike. Adding another note to the celebration, veteran actor Amitabh Bachchan took to social media to release the very first track of the film – ‘Daata Shakti De’ which means “GOD, give us strength” a soulful track which will give you goosebumps.

T 3646 – On the auspicious occasion of Anant Chaturdashi, sang a prayer .. “Daata Shakti de”.. composed by dear friend @drumsshivamani and presented by @arrahman ji for the musical #AtkanChatkanOnZee5 . Wishing them all the very best .. @ZEE5Premium pic.twitter.com/0L1r2uB1LI

We all must have read about several rags to riches story that are motivational as well as an inspiration to many. ZEE5’s movie Atkan Chatkan infuses a solid déjà vu moment and takes us back to those memories.

The film ‘Atkan Chatkan’ is out, and it looks like a captivating story of dreams and hope which is full of inspiration. The film revolves around Guddu, a child living in an economically weak household, who has a fascination for music. However, he doesn’t really have the resources to learn music.

Wanting to become a musician, Guddu creates music on whatever he can find. He forms a band with other children that could possibly win a competition and get them all into a music school. But the economic limitation isn’t the only thing setting Guddu back. Guddu’s father doesn’t approve of his dreams. So, he also has to fight his father in order to fulfil his dreams.

While AR Rahman is presenting Shiv Hare’s directorial Atkan Chatkan, the music of the film is composed by legendary percussionist Sivamani.

The story of Atkan Chatkan is about a young boy Guddu who loves music and works hard all day to make both ends meet. Despite not knowing anything about the musician he aspires to become one. Guddu believes music is everywhere and does not need proper musical instruments to create music. He dreams of going to Tansen music school and learns the art.

Whereas, Guddu’s father Vishnu is an alcoholic and does not care about his children. Vishnu is unaware of his son’s dream and hates music from his core. Guddu has a younger sister who he loves from the bottom of his heart and wants to see her happy.

ALSO READ:  Many Women DJs Are Struggling To Survive In Pandemic

One fine day Guddu forms a musical band with his friends Madhav, Chuttan, Meethi, orphans who beg to earn money and showcase their talents of dancing and singing. But one day, the meaningless lives of these four kids change when they get a golden opportunity to perform in a musical competition. Their journey towards success starts with several obstacles. The story of Atkan Chatkan is about how the kids overcome their obstacles and will they lose their spirits? Or fight hard for it?

Atkan Chatkan is an inspirational movie that brings tears to your eyes. Saumyy Shivhare along with Aadesh Raathi has penned down the script of this movie which is simple yet powerful. The makers of the movie have shown the hardships that non-privileged kids face on a day to day basis and how to achieve their dreams they have to work extra hard.

Talking about the acting, the four kids Lydian Nadhaswaram, Sachin Chaudhary, Yash Rane, Tamanna Dipak, Ayesha are simply phenomenal and outstanding. These kids are an example of amazing talent and are an inspiration in many ways. Lydian Nadhaswaram is a talented musician and has we must say he has perfectly essayed the role of Guddu.

Talking about the film, Sivamani said in a statement, “As kids, we have always been a little lost and looking for hope for our bizarre dreams that only make sense to us at that age, just like Guddu. It is an amalgamation of these four kids’ burning desire to fulfill their dream. A musical that will take you on a rhythmic journey of hope and dreams. We all need a bit of hope at this time.”

The entire movie lies on the shoulders of the young talented kids and they have managed to do their level best. The scene where Guddu and his younger sister tries to sleep by listening to various sounds will make you smile and cry at the same moment.

The movie is set in Jhansi and the viewers get to feel the essence of the small town. The God of music AR Rahman is the presenter of this film and the expectations of the viewers are automatic raise to another level.

But we must say, the story of Atkan Chatkan rises much more than what you expected and is a masterpiece in itself. The movie has amazing songs which are crooned by Amitabh Bachchan, Sivamani and others which are a treat to ears. The plot of the movie amazes at every level and brings out the wow factor. We must say after a long time, there has been a movie about kids and burning passion.

One thing that the movie has taught is that sound can be created and music is everywhere, one does not need an expensive instrument to showcase their talent. Atkan Chatkan is a total paisa vasool film! #DreamItLiveIt #AtkanChatkanOnZEE5 #KhabarLive #hydnews