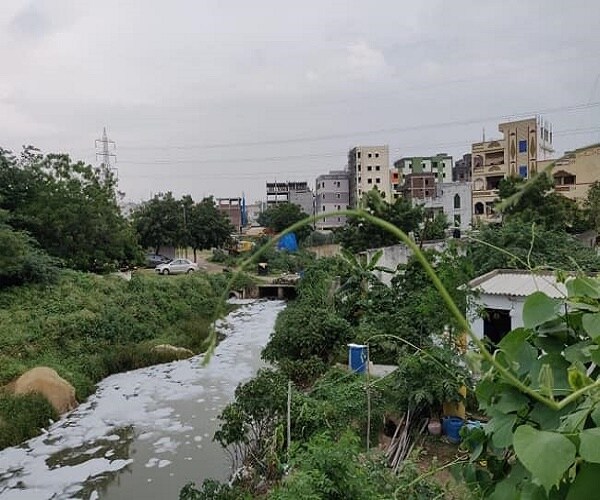 Hyderabad murky drains or naalas are making stink froth in everywhere, the apathy of municipal authorities who are not properly maintain the dirty drains. Several complaints pouring in about the stinking froth and health issues but no action taken yet.

Rama Rao, who came to Kanakadurgamma temple in Dharani Nagar in Hyderabad’s KPHB colony to unload material, is posing for a photo with his friend, has an amused expression on his face. Behind him, there’s white froth flowing in the drain under Pariki Cheruvu.

“Is there a dhobi ghat nearby?” Rama Rao yells out, wondering if the froth is because of detergents. Of course, it wasn’t. The froth is accompanied by a pungent smell that covers the area and is a nightmare for residents. This isn’t the first time froth has hampered the lives of residents. it has been an annual occurrence for at least four years.

Pariki Cheruvu joins the Yellamma Cheruvu outflow channel, and a narrow drain passes through Dharani Nagar eventually joins the Kukatpally nala, one of the four major nalas that dump industrial effluents into the city’s Hussain Sagar Lake and eventually the Musi River.

Pariki Cheruvu is usually witness to the dumping of effluents from the Jeedimetla industrial area, where there are a number of units of chemical industries. Several drug companies have been pulled for violating environmental norms for discharging effluents into nalas.

The ongoing rains that has brought Hyderabad to its knees has exacerbated the condition in Dharani Nagar. Ramesh Yadav, a migrant labourer from Bihar who has been staying in the area for the last five years, said that there have been many health problems due to the front, and that children and the elderly are the worst affected.

“Whenever there’s froth, officials and the media come and take photos, but nothing changes. The frothing continues,” he says.

50-year-old Pushpa P, another resident who has been in the area for the last seven years, says she’s developed infections, rashes and breathing problems due to the froth.

“We have brought it to the notice of the officials many times. They said that it was because of detergent usage in higher ground, but it is definitely not that. On the days the smell becomes more pungent, none of us feel like eating,” she says.

Pushpa’s flat is right next to the drain, and due to this, she has even had to leave the place for some time.

“Imagine going to sleep at night and waking up in the morning to your house filled with froth. We had to leave the place for some time,” she says.

Anu N, a mother of two, says that officials haven’t taken up the issue. “The children are getting infections and are developing a fever. We are scared that they might not grow well as they fall sick every monsoon.”

“Effluents are being dumped in the lake by industries in violation of the rules. Frothing is occurring every year and since our house is very close to the nala, froth enters our house. Authorities constructed nets along the drain to stop the froth from coming in, but is that really a solution?” she asks.

“The government should do something, This is not just affecting us, but also stray animals and the environment,” she adds.

While local representatives say that the nala is frothing because of effluents from Shapur-Jeedimetla industrial area, Pollution Control Board authorities deny the charges.

An official from the Telangana Pollution Control Board said that the matter had come to their notice earlier and that officials cleared that the froth was due to detergents.

“This issue has come to our notice earlier as well, at that time concerned officials cleared that the froth in Dharani Nagar drain is because of the detergents that are being used by locals upstream,” the official said.

However, he refused to explain why the PCB believes that domestic detergent is the cause for the froth and not industrial effluents that are discharged in the lake. This was also the issue raised by a local representative.

Speaking to #KhabarLive, Dharani Nagar Welfare Association President Mahender Reddy said, “Officials came and conducted many tests, and they said that the froth is because of detergents. If that is the case, why is the stench is so bad, and why are people developing health issues?” he asks.

Authorities have made similar claims earlier, and a report by the PCB in 2018 also said domestic usage was the cause. However, Dr Lubna Sarwath from Save Our Urban Lakes (SOUL) says that the report was a sham “because it singled out domestic usage and was silent on industrial and pharma pollution.” She says that they contested the report, and didn’t receive a response.

Lubna said that no scientific report was submitted to back the claim of the authorities that the source of the froth was detergents, and if that was the case, no action had been taken.

According to Dr Lubna, a report by Toxics Link attributed the cause of the froth to nonylphenol, which is used extensively by plastic, pesticide, leather, paint and textile industries — the same kind of industries that are present in Patancheru and Jeedimetla industrial areas. Nonylphenol is considered carcinogenic.

“It is preposterous to declare that domestic usage is the cause of froth and pollution of lakes without any scientific and in-depth analysis. Scientists have said that a major influx of direct chemicals into the waterways can be the cause of frothing and chemical pollution,” she says. #KhabarLive