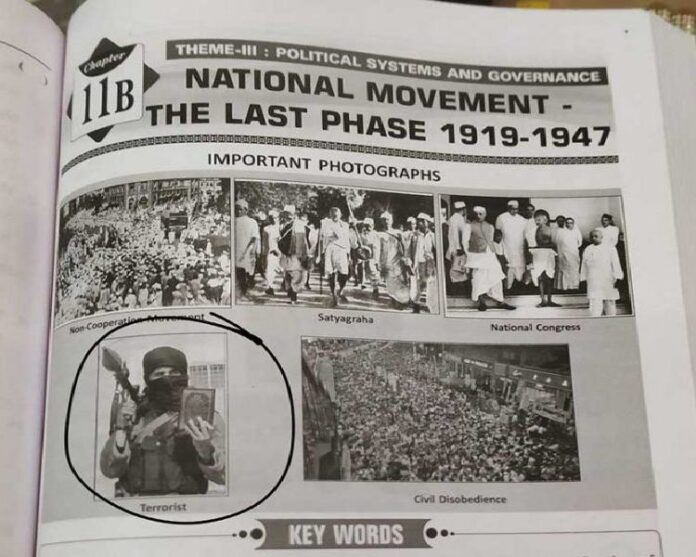 Some privately published supplementary study materials for schoolchildren have sparked a controversy in Telangana for featuring in an image of a masked man, holding the Muslim holy book Quran, labelled as a “terrorist”.

While seeking immediate action against the publishers of the material, Students Islamic Organisation of India Telangana said that such content will prejudice students’ minds.

The Telangana chapter of the Students Islamic Organisation of India (SIO) has taken strong exception to a picture published in the ‘Question Bank’ for the Social Studies (English medium) study material for Class 8. They have demanded the Telangana government to immediately remove ‘Islamophobic’ content in the Class 8 school study material published by a private publication.

The picture, which has been named ‘terrorist,’ shows a man holding a rocket launcher in his right hand and the Quran in his left hand. It was published in the chapter titled ‘National movement – the last phase 1919-1947,’ under the theme of political systems and governance. The “terrorist” age is among other “important photos” depicting crucial events in the Indian freedom movement – the Non-cooperation movement, Civil Disobedience and Satyagraha, and leaders of the early days of the National Congress.

“It is creating and propagating stereotypical, hateful and Islamophobic view towards the Muslim community, by showing a person holding a gun in his right hand and the holy Quran in the left hand. It is discriminatory and hateful content, which destroys the harmony, unity and integrity of the society,” he said.

Stereotyping a particular community as terrorist should be condemned, and strict action should be taken.
Thanks https://t.co/7BMtIgKmk5

In a statement issued by SIO said, “Peace must be infused in the minds of students through peace education, and peace curriculum in educational institutions. It demanded the education ministry not to approve such distracting content and take action against such irresponsible and propagandist behaviour.”

The SIO has further demanded that the publishers immediately delete the toxic content and republish the edition. The SIO has also sought the intervention of higher officials of the state education department.

Social activist SQ Masood urged the Telangana DGP and Hyderabad Police to take serious note of the issue and take legal action against the publishers following an investigation. “Stereotyping a particular community as a terrorist should be condemned, and strict action should be taken,” he said.

The issue was flagged by a Twitter user Shaik Aslam Saturday, who posted an image of a part of a book called ‘Real Life Beyond Text Book’, a social studies help book for students of Class 8.

“This humiliates Muslim students, teachers and the community, and also lead (sic) to destroy the unity and integrity of the country,” he tweeted.

In response to Aslam’s tweet, another user Gani Kateeb shared the same photograph from another supplementary book for Class 8 students, published by VGS Publishers.

“Not only one but many publishers published this. One example is VGS Publisher’s from hyd. I have taken this from my sister’s material,” he tweeted.

The publisher of the ‘Real Life’ series of books, meanwhile, is yet to be identified.

However, VGS Publishers responded to #KhabarLive sent e-query after the publication of the story, saying in a statement that it has decided to delete the picture and reprint the books.

“It has been learnt that a few people got hurt by the picture published in our 8th class book. We express our sincere regrets. It was not at all intentional. We do not intend to hurt anybody’s sentiments. However, we have decided to delete the picture and reprint the books. We are also in process of collecting back the unsold copies from the market to avoid any further inconvenience to anyone,” the statement read.

These books are separate from the official textbooks published by the government for the Telangana state board, and are known as ‘study materials’, ‘question banks’ or ‘guides’. They are published by private companies based on the state board syllabus and are widely used by students in Telangana as supplementary material.

While government schools in the state have to use textbooks published by the state board, private schools in Telangana are free to use any books.

“There is officially no authorisation for such study materials and they’re very widely used by students in both states (Telangana and Andhra Pradesh). They cannot be called illegal because first of all there is no regulation for them. These publishers have their own experts and they publish the material,” said Venkat Reddy, convener of M.V. Foundation, an independent organisation working for children’s right to education.

These books are also easily available in stationary stores across the state and can be found online.

“Lakhs of such copies from different publishers are in the market and lakhs of students use them. Even government school teachers unofficially use such materials,” a senior official from the Telangana Education Department told #KhabarLive.

Several people called out these publishers after the pictures surfaced on social media, including prominent city-based activist Khalida Parveen who demanded action from the government.

“Why Social Studies book misguiding the students in #Telangana? How come some one can design a man who was named as #Terrorist holding #Quran on hand and gun on shoulder? Stop this immediately (sic),” Parveen tweeted.

Why Social studies book is misguiding the students in #Telangana ? How come some one can design a man who was named as #Terrorist holding #Quran on hand and gun on shoulder ?
Stop this immediately @SabithaindraTRS @KTRTRS @KTRoffice @TelanganaCMO @asadowaisi @SQMasood pic.twitter.com/4qpbfyF78F

Meanwhile, the Telangana unit of the Students Islamic Organisation of India, the students’ wing of the Jamaat-e-Islami Hind, called the photograph of the so-called terrorist “discriminatory, full of hatred and Islamophobic”, and demanded immediate action from the government.

Amjed Ullah Khan, a leader from the political party Majlis Bachao Tehreek, also urged the government to seize all the material and file a criminal case.

“TelanganaDGP Sir, take note of a class VIIIth social studies work book published by Real Life Publisher showing a person as a terrorist carrying a holy book has hurted the sentiments of muslim’s, book a criminal case against him and seize all material (sic),” Khan tweeted.

Meanwhile, the content attracted strong reactions from many on social media. Citizens wondered how a secular government in Telangana allowed such content in the school curriculum. #KhabarLive #hydnews