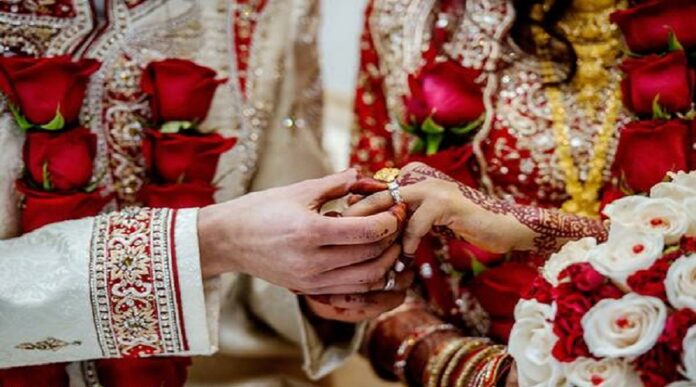 A new trend set to trigger a new routine in Muslim weddings, are now, being held during the day time unlike earlier when the celebrations used to go late into the night and so on.

In a new trend, triggered by the Covid-19 pandemic, many Muslim marriages and related functions in the city are now being held during the day, unlike earlier when they were all about nightlong celebrations.

Across the city, the ‘nikaah’ is now solemnized during the afternoon and the celebration ends by evening. Guest lists have been trimmed and reception menus have lost weight.

“It is almost six months since the lockdown was imposed and many marriages were postponed. So now with relaxations announced, marriages are being held, but as low key affairs with limited guests,” said Qazi Habeeb Ahmed Bin Salam Al Attas of Barkas, adding 20 to 25 marriages were taking place in the city every day.

Many families are organizing the marriage function at their houses due to the limited number of guests. Only a few relatives of the bride and the groom are invited. In exceptional cases, budget function halls or even smaller ones are being hired for the celebrations. Earlier, day time marriages in the community were very rare as the functions used to be held in the evenings and continue till late into the night.

Abdul Rasheed of Santoshnagar, whose brother’s marriage was held recently, said the guests were limited and all safety measures were taken like social distancing and wearing face masks. “In fact, we ensured that the chairs were sanitized before the function and for lunch disposable plates and glasses were kept,” he said.

Interestingly, low key marriages are helping people save money that usually goes into organizing a lavish wedding. “The money saved is being gifted to the couple by their families,” said Ilyas Shamshi, a social activist.

ALSO READ:  Making A 'Temple' Out Of A 'Mountain', Craftsmen Race Against Time At 'Yadagirigutta'

Religious scholars and community elders have for long been campaigning for low profile marriages and curbing large extravagant weddings.

“Nevertheless, the Covid-19 pandemic has at least for the time being stopped the practice of big weddings and lavish menus. People are getting accustomed to low profile marriages. Hope the community will continue it,” said Dr. Aleem Khan Falki of Socio Reforms Society.

Lockdown Marriage – ‘It was exciting, adventurous and special’
Twenty-eight-year-old Najaf Naqvi and 25-year-old Fariya Sultana had a little over 24 hours to prepare for their wedding. Naqvi and Sultana were slated to get married with all the pomp and family presence in Hyderabad on April 5, 2020, before the lockdown was announced. Then, they had two options — wait indefinitely while the world gets back to normal, or get married immediately, without any further delay. The couple chose to do the latter.

On April 6, their nikah happened with some 16 people in attendance (excluding the bride and the groom). The twist being — they were all in their respective houses, in different cities even, watching the wedding unfold on Skype, WhatsApp, and other digital platforms. While the groom’s family witnessed the wedding from Kanpur, other relatives joined in from Bengaluru. In Hyderabad, only the groom, the bride, and her immediate family were present in the apartment when the nikah was being officiated.

The interesting thing is, it was all being done by two Kanpur-based maulanas, who were called in last-minute when the couple could not arrange for a qazi in Hyderabad. Both the families had permissions in place, and they took all necessary health precautions, including wearing of masks.

#KhabarLive reached out to the newly married couple to find out exactly how they pulled off this last-minute wedding. What followed was a conversation peppered with laughter and a lot of hope and excitement for the future.

“We had a lot of time to plan the wedding, so naturally we had many expectations,” said Sultana. “We were disappointed because things didn’t happen as per plan. But, as things unfurled, it became more special because we realized we made it despite so many difficulties and roadblocks. We did initially think that we would have to postpone it and do it in June, given the situation, but then since nothing was pre-determined, we thought it better to go ahead and do it before things get worse,” she said, adding that ‘nikah‘ — or the actual wedding — is most sacred in Islam, and everything else, the celebrations and family gatherings, et al, is secondary.

“When we were getting married, it was not sinking in. We were facing some technical issues also. In the evening, when we all sat down for dinner, that is when it dawned on me that this nikah has finally happened!” said Naqvi, who works for a multinational company in the Telangana capital.

Naqvi is the older of two brothers, and it was obviously difficult for him and his family to be apart on such a momentous day. “My father was the one who first asked me if I am ready to do a nikah like this. He asked me to find out if my in-laws are game. They were pretty receptive to the idea. My parents gave me their blessings. After my uncle got married 25 years ago, this was the first wedding in the family, but it had to happen like this. My in-laws stepped up and assumed the role of my parents,” he said.

The wedding trousseau
Sultana wasn’t sure till the last minute what she was going to wear; her nikah outfit was quickly patched together. “We usually wear red for the ceremony. I had this new dress, which had a ready-made palazzo and a dupatta, a bit heavy. And then I had a kurta which did not match at all, but it had to be done. Eventually, it looked really put-together, and as a bride, I was more than satisfied with how I looked on the day,” she laughed.

She even did her hair and makeup on her own, too. “Before the wedding, the bride and the groom are not supposed to see each other. But in our case, we were getting ready simultaneously,” she said.

Her husband, meanwhile, had a slightly different experience. “In our culture, the groom’s wedding attire is put together by the bride’s family and vice versa. So, my mother-in-law and I had already shopped for a sherwani last month. That was there with them, and I was lucky that way. But, there was an ‘auspicious hour’, and the nikah had to happen by 12.30 pm. But, we had to go out to run a few errands in the morning, and by the time we rushed back, it was already 12.15 pm. I had 15 minutes to get ready. So, when I sat down, I had worn a pair of jeans underneath the sherwani — and they could only see my face. When the camera panned towards Fariya, I quickly wore my pajama,” he laughed.

What next?
The couple understands that even though the wedding has been solemnized, the vidaai (bride leaving her maternal house to start a new life with her husband and his family — in this case, a journey to Kanpur) and the walima (wedding reception) still remain. And amid the lockdown, things will have to wait. Naqvi said he will continue to work from home and plan something as soon as the travel restrictions would be lifted. #KhabarLive #hydnews