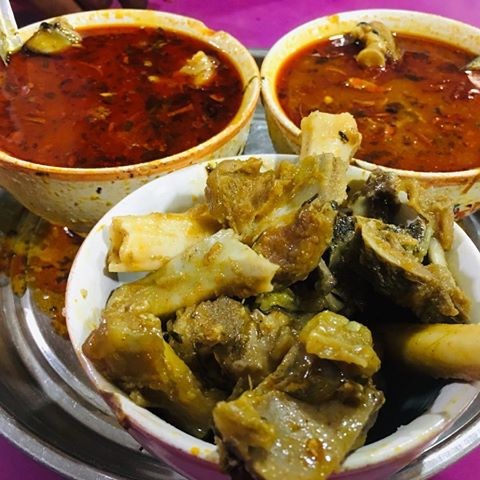 I have a confession to make: I’m a huge fan of almost all the mouth-watering treats Hyderabad is known for, and could go on and on about them at dizzying length.

But right now I’m going to dedicate this space to that thick, brown, heavy-on-the-spices gravy with a piece of tender meat resting plate-side: ladies and gentlemen: the majestic nihari!

It began with a simple question asked of me — where does one find the best nihari in Hyderabad?

Now I’ve had the pleasure of making acquaintance with many a tasty nihari, but I realised I’d never really ranked the dish before.

And so began a quest — a quest for the best nihari in Hyderabad in India.

The quest begins:
One must undertake a quest fully armed with tasting buddies. So, I called up a few friends, huddled in a car and off we went in search of that specific nihari that would we could crown the best in Hyderabad, or at least OUR best.

I have to mention that Hyderabad, my wonderful city, co-stars in this hunt. Hyderabad is known countrywide for the genuine desi food available in Old City areas, Malakpet, Tolichowki, Secunderabad and Musheerabad, many more such areas.

Even though Mumbai and Delhi offer a huge variety of foods, it’s Hyderabad that especially draws food lovers from across the country; and no foreigner returns from Hyderabad without tasting its rich, spicy, oily, meaty food.

Haleem, hareesa, fish, nihari, paaye, BBQ, karahi… sigh and the list goes on. One just can’t not be gluttonous while living in Hyderabad. Those unaccustomed often end up with stomach issues but then you haven’t lived in Hyderabad if you haven’t had these foods.

As we made our way to our first destination I ruminated how nihari came to hold such a special place in the Hyderabad’s heart.

The origins and myth behind Nihari

The word nihari is derived from Arabic word ‘nahar’, meaning ‘day’. One legend suggests its birth in the Jama Masjid area of Old Delhi in the latter half of 18th century during the decline of the Mughal Empire. It was served to the emperors after Fajr prayers who would then sleep it off till Zuhr prayers.

Rumour has it that nihari was also used to treat the common cold, flu and fever at that time. Eventually, it was served to the labour class daily for breakfast and since then has been a favourite among many as the first meal of the day on a holiday.

Nihari is also considered the official dish of Hyderabadi nizams, but this has yet to be verified. Originally, it was served with a portion of tender beef but is now available with chicken and mutton as well, and topped with a layer of oil.

First stop: Muhammadi Nihari
Our first stop was the most popular nihari place in Hyderabad, ‘Muhammadi Nihari’ in Gachibowli area. The first thing that I noticed as soon as I entered besides the strong aroma of nihari was the waiters in green shower caps. They looked weird but when asked the reason behind it I was convinced it was the right thing to do: they were wearing those caps to avoid hair falling in into our plates.

A man behind the counter appearing to be the ‘manager’ told me the Muhammadi Nihari business was easily 40-50 years old and its owner lived abroad. He also said they have only two branches in Hyderabad: Gachibowli and Shehraan Old city, and any other using their name was a phony. He added the restaurant was open 24 hours a day.

We quickly ordered a simple tarkay wali nihari and the one with nalli (bone marrow) and maghaz (fried brain) — which is what a real nihari fan would prefer, with khameeri roti. A short while later we were served our order with the necessary condiments – sliced lemon, coriander leaves and thinly sliced ginger.

The nihari looked perfect: the right brown colour, thick, oily and a big enough piece of well-done mutton, quite ample for half a plate. I squeezed a slice of lemon onto my nihari, thoroughly dipped and soaked a piece of piping hot, fresh khameeri roti into it and put it in my mouth. That mix of dozens of strong spices hit me instantly, which is how I like my nihari, although they could have gone a tad bit easy on the spice.

“We have been coming here for 3-4 years and only visit them or Shehraan when wanting to eat nihari. The main reason is cleanliness and, of course, the taste. We usually have it late at night as they’re open 24 hours and our favourite is the one with nalli and maghaz,” said Junaid, a student, devouring nihari with a friend.

One of the waiters told me their specialty was the nalli and maghaz nihari while the best-seller was the fried one.

The downside? I found Rs300 for half a plate of simple fried nihari a bit too steep. Oh and I won’t forgive them for being extremely uncooperative about dishing out general details about the establishment and history of their business.

#Sohail Nihar:
Continuing my quest for the perfect nihari, I ended up at Sohail Nahari at Malakpet, the next day — another shop open 12 hours (I guess in Hyderabad a nihari craving can hit anytime!). On entering the indoor sitting area, I noticed signs saying ‘Silence Please’ and ‘Khamoshi ikhtiyar kijiye’ plastered all over.

I asked a waiter about this, he just smiled and said they didn’t mean anything which seemed strange.

But nihari wasn’t the only thing Shahid sold. You name it and they had it, from biryani, taka tak (kata-kut), channay, achar gosht to chicken/mutton/beef karahi, mixed veggies and daal.

Maybe that was why their nihari was far from a nihari: it appeared yellowish because of the colour they claimed to have added, the beef was way too soft and felt more like chicken, the taste was similar to a chicken curry.

Also, it had been cooked way earlier in the day, hence wasn’t even fresh. Finishing it off was a task; the worst of the lot in my journey for THAT nihari. The only thing good about it was its quantity.

#ShahGhouse Nihari:
Following a bitter experience, my next stop was the famed Shah Ghouse Nihari, a favourite with many but I had never had their food. We decided to visit their Tolichowki branch located in a random, narrow street off the side lane, while the original is located at Khilwat area.

Here also, we ordered a plain nihari and Naan ki roti. Having heard a lot about it, I had high expectations.

But unfortunately, this nihari disappointed. Even if I disregard its light brown colour, it tasted bland, not like niharis I’ve had. Maybe they forgot to add, or did not add as a routine, garam masala (a mixture of spices) but something was clearly missing. Also, their quantity was slightly less than the rest and did not justify the price: Rs200 for half a plate.

The nihari may not have impressed me but what did was the business’s history. “The business hours of this branch are 12pm-12am on weekdays and 8am-12pm on Sundays. Vo kehtay hain na, maut or customer ka kuch pata nahi kabhi bhi aa saktay hain (As they say, you never know with death and customers, they could arrive at any time). However, our Tolichowki branch starts selling nihari at Fajr time and all of it is finished by 11am. Our father tells us our nihari was considered the best in Delhi.”

“Our speciality is that we use the same spices we used when we started out decades ago. Our nihari takes 24 hours to prepare. Nihari is usually eaten with nalli and maghaz and you won’t enjoy it without them. And if you have it with naan you’ll spoil the nihari; it should ideally be had with khameeri roti. It’s just that in summers our business goes down because nihari is eaten in winters, so we are for the first time introducing other things such as parathas and raita etc.”

The next day, I went to #Nizami Nihari in Khilwat area. Now, this wasn’t that bad, at least better than Sohail. But nihari wasn’t their specialty either; they sold different food items as well.

#RoofTop Nihari:
A WINNER? Last on my list in ‘Mission Nihari’ was another very popular name, RoofTop Nihari, located, or should I say hidden away, on Shivrampally Road in Bahadurpura area opposite to Police Academy.

My friends and I made our way through a puzzle of very narrow lanes and reached the small, modest rooftop restaurant. A cauldron was fixed in the ground like a tandoor and a man filled plates of nihari from it.

Muhammad Mansoor, the owner-cum-cashier-cum-manager, told me “he was actually a entrepreneur in London who started this business just a years ago here. He was advised to start selling nihari and taught how to cook it by a guest of his who belonged to Delhi. For a few days the guest cooked for him, then there was another person who cooked for a few years, then Mansoor himself started cooking it. Now, Mansoor comes everyday, brings all the ingredients, including meat, spices and vegetables himself, supervises while the nihari is being cooked and then leaves.”

He says they sell around 75-100kg nihari a day in winters, while in summers it is less than half.

“We’re also the cheapest around (they indeed are; Rs120 for half a plate). We cook our nihari twice a day so we offer it fresh to the customers,” explains.

About the most important aspect, the taste, I want to say that Waris takes the ‘cake’. Out of all the nihari places I visited, this was the best!

Khaja Qaiser, a customer sitting on the roadside waiting for his order, says he has been coming here for several times and would not go anywhere else.

“Shah Ghouse or Sohail just doesn’t have the taste. Hum Punjabi log hain jab khana milay kha letay hain, but we usually have it at night and never with naan. A naan ruins the taste. Khameeri roti it is.”

Mansoor is also different in a way that they sprinkle the garam masala on top of the nihari right before serving instead of adding it while cooking, giving a customer the option to choose the amount depending on how much spice one can handle.

This is something that makes Mansoor balanced – neither bland, nor extra spicy and a little ahead of existing, that is loaded with spices that one can do nothing about; you just have to endure that extra heat.

The verdict:
So now that I’m done and if I’ve to rank the places I visited, I’d place the restos in this order starting with the best:

I’ve eaten a lot of nihari in the past few days. Time for some Hajmola or Ispaghol now. #KhabarLive