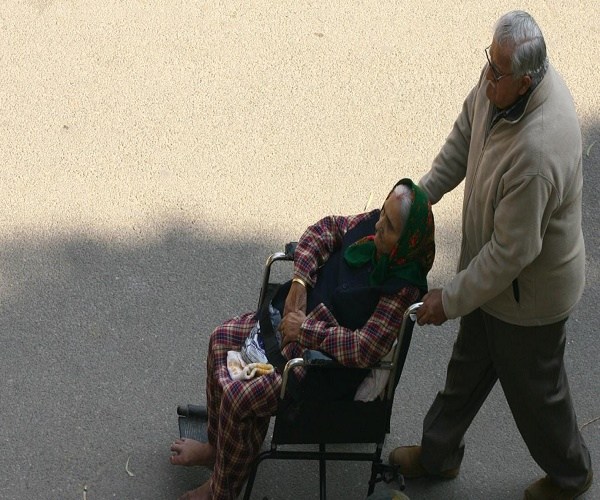 I am a 45-year-old paraplegic, whose limbs have been paralysed by polio. When I was younger I could walk with the help of escorts, but now I use a wheelchair. I love travelling to different places across the country, including high-altitude ones like Vaishno Devi in Jammu & Kashmir. Whichever place is accessible by a wheelchair or doli, I’m there.

April 29 was voting day in Navi Mumbai where I live. My polling booth was a municipal school in Koparkhairane, which had voting machines on both the ground and first floors. There was no lift. Everyone’s name was allotted to a specific machine and that couldn’t be changed. Mine was in a room on the first floor.

Two people working at the polling booth came to help me out by trying to lift me up the stairs. Of those two, one man raised safety concerns, “Who will take the risk if something happens? What if he falls; what if the wheelchair breaks?” He felt they could not take that risk. And I think he was right: Two people would have difficulty lifting my weight of over 80 kg, and the stairs did not have space for more than two people to hold the wheelchair. Ultimately, they decided it was too risky to take me up.

Then the poll officer came and said he was sorry, that he could not make alternative arrangements. I did not fight much beyond that point, because there was nothing I could do. There was no way to change the list on which my name appeared, according to them.

This happened even though I had registered myself as a “handicapped voter” on the election commission of India’s (ECI) Android app that is specifically designed for persons with disabilities (PWD). The app promises that once you register, you will get accommodations—people will come and pick you up, ensuring that you will be able to reach the polling booth and vote. So the ECI was already informed that I am disabled, despite which I was allotted a machine on the first floor, in a building with no lift.

I have not faced this problem in past elections, because I have always been listed on the ground floor.

The process of obtaining my voting identity card earlier this year was also difficult. For that I had to run to an office in Airoli, also in Navi Mumbai, which was a government building with a narrow staircase and no accessibility for wheelchairs. I had to send my driver upstairs and then have him help me speak with the government officials via mobile. They were reluctant to do so—they kept saying “ask the person to come up,” though I eventually did get the ID.

Such problems affect super senior citizens as well. I saw a woman, who seemed over 90 years old, at the polling booth. She was in a wheelchair right up to the staircase, after which a couple of guys who seemed to be volunteers literally held her by the shoulders and dragged her upstairs. They looked healthy enough to just lift her and take her up, but they didn’t do that. Emotionally, I was very disturbed to see that. I feared she could suffer a shoulder dislocation. I would not want to see my mother dragged like that.

ALSO READ:  #TelanganaLegend 'Madadi Ravinder Reddy' In A 'Class Of His Own'

With all the advertisements and so much money spent before and during this election, the ECI and other institutions and officials are missing an important point—how well can people access polling machines? People should be able to vote, and vote in comfort and dignity—not getting dragged or lifted to the first or second floor.

Voting is one of our basic rights. If you’re planning on providing accessibility for voting, it has to be right up until the voting machine. If you are putting up a ramp in a railway station, it has to be all the way into the train. These have to be thought through. Accessibility means accessibility till the end point.

(There were 26.8 million disabled people in India, according to Census 2011.) #KhabarLive