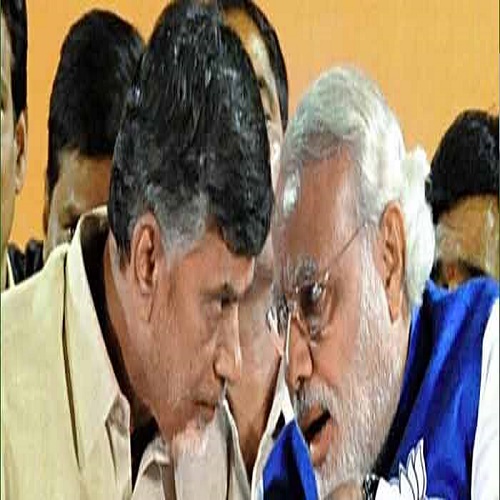 This political drama being played out by the two parties, needless to say, is intended to convince the people that though they were for ensuring their welfare, the other was throwing a spanner.

This time around, the TDP is playing the role of a victim of deceit and treachery. Though it was following the coalition dharma, the big brother at Delhi is not considerate. He is not releasing funds and is not reining in his leaders from attacking the TDP regime round the clock.

But it may not be hard for people to put two and two together and realise that it is at the bidding of the top leadership of the two parties that the mutual hate campaign runs from time to time uninterrupted.

TDP chief N Chandrababu Naidu has given an impression that the BJP was testing the limits of his patience by being not receptive to his pleas for financial succour which the state needs badly to stand on its feet after bifurcation of the state in 2014.

It was Naidu who had touched the sensitive subjective of snapping the alliance with the BJP after NITI Aayog Vice-Chairman Dr Rajiv Kumar visited the state and said, tongue in cheek, that it needed neither hand-holding nor special category status as its economy was very vibrant.

Naidu, referring to his comments and the earlier “unhelpful” attitude of the centre, had said the next day that if the BJP wanted them out of the alliance, let them say it and, “we would exit from it after making a namaskar.”
Then as if he got a second wind, he asked his party leaders not go overboard in attacking the BJP. He asked them to pipe down since the TDP should follow the code of coalition dharma.

It was for the first time that Naidu hinted at snapping ties and when AP drew blank in the national budget the other day, TDP MPs went against the Centre hammer and tongs for making meagre allocations.

What was more humiliating for AP was that Telangana got a better deal compared to AP by getting a few hundred crores more, which too is a miniscule compared to what Chief Minister K Chandrashekar Rao had expected.

The TDP MPs offered to resign and gave enough indications that the marriage between the two parties was over the hill and divorce was imminent. Then Naidu called a meeting of parliamentary party at Amaravati where after hours of deliberations, decided to stick with the BJP rather than break away but fight for what is due. Naidu told the MPs to stall the proceedings of both the houses of Rajya Sabha and Lok Sabha.

Like committed foot soldiers of the party, they breathed fire at the Centre on the first day after decision to disrupt the business in both the Houses was taken, and the result was they could get an appointment with Home Minister Rajnath Singh where they recounted their grievances and demands to him, ad infinitum.

As the TDP members have called the BJP leaders names, JC Diwakar Reddy even alleges that Prime Minister Narendra Modi was thirsting for revenge as he hates Naidu. He prophesied that the state would not get anything as long as Modi was at the helm.

Quick on the uptake, BJP leader Somu Veeraraju, attacked Chandrababu Naidu at personal level. Without mentioning Naidu’s name, he, addressing a public meeting in Kurnool, said he did not know how a man who owned two acres of land once could amass riches.

Later, when media persons asked him whether it was his personal opinion or whether he had clearance from the party for attacking Chandrababu Naidu, he was quite categorial. “I have no individual opinion. I only speak party’s policy,” he said in regard to the TDP owning all the central schemes as its own and remaining silent on what the Centre had given already to the state which he said were quite substantial. He, however denied he was targeting Naidu when he referred to a leader amassing wealth.

Former MP Vundavalli Arunkumar said that these public posturing by the leaders of the two parties are only to project themselves as paragons of virtue and paint the other as the villain of peace. Interestingly, he said, both the parties have approval from the other to tarnish their image, implying that the reason for this drama is that one needs the other because one does not know what polls have in store for them next year.

Modi may not be in need of Naidu now because he has brute majority in Parliament. But who knows he may require Naidu’s help tomorrow. For Naidu, it is essential for him to be in the good books of Modi since, if Modi returns to power. It pays to remain pally with him rather than ruffle his feathers. #KhabarLive