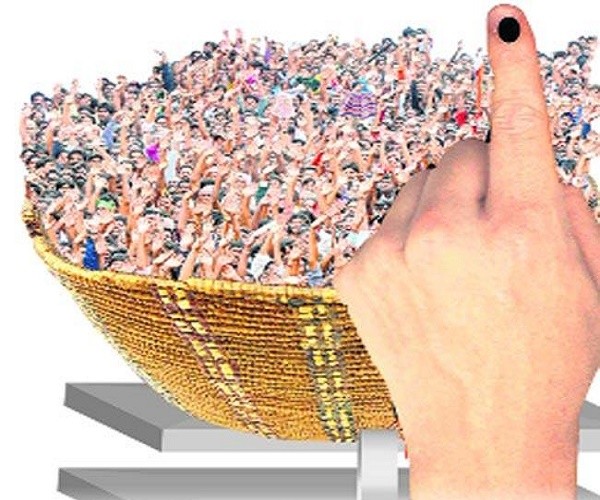 While declaring Telangana “election ready” the Chief Election Commissioner (CEC), OP Rawat, had assured Telangana that “every voter in the final list published now is genuine”. The CEC after his three-day review of poll preparedness in Telangana said the Commission has used the latest technology to purify the electoral rolls during the special summary revision process.

However, a status check at Nampally constituency in Hyderabad by #KhabarLive showed a large number of discrepancies in the final electoral rolls released by the EC on October 12. #KhabarLive visited houses across various colonies under the Nampally constituency on Thursday and came across many instances where extra voters have been added under addresses. Some of the addresses mentioned were untraceable, some houses were locked with no one staying at the given address anymore and some voters were registered at addresses that are vacant plots. Names of voters who had died almost a decade ago also find a mention in the final electoral rolls.

With over 2.7 lakh registered voters, Nampally is one of the most densely populated constituencies in Hyderabad and registered a 51.57 % voter turnout in the 2014 Lok Sabha Elections. This constituency has always been an AIMIM stronghold.

But the plot numbered 12-4-400 at Dattatreya colony where Sunil stores wood for his timber business is not a “shared space” nor is it an apartment complex. This empty plot has 50 voters registered at the address.

“There are no people living here on this plot, I just store wood here. There used be shacks here built by people from Andhra Pradesh but that was some 20 years ago,” said a puzzled Sunil who could not identify the voters registered at the address. He was informed about the discrepancy by his neighbour who is a Congress party worker but has since then done nothing about the voters registered at his plot, “Not sure how this affects me, also I do not know who I should go and complain to,” he added.

Right next to Sunil’s plot is a single floor house-cum-shops numbered 12-4-399 that faces the main road. The house has remained locked for the latter part of the year and shops have been given out for rent. While there are over 20 voters registered at this address, the shopkeepers could not identify nor knew the names of the individuals registered at the address.

“Dattatreya colony is named after the Dattatreya temple and the surrounding locality has predominantly Hindu population residing here. But the names that have been added to the addresses at this locality are all Muslim names,” said Ravi Kumar* a booth level worker for the Telangana Congress and resident of the colony. “Congress and AIMIM were in alliance all these years, so no fuss was created about the bogus voters by my party. But this time the party is serious about winning here but the bogus voters will ensure that AIMIM still wins this constituency,” he added.

Suresh A was on his way to reapply for a voter id card for his wife when #KhabarLive caught up with him. “She was deleted from the rolls last months but these people have not yet deleted my father who died in 2014,” he said. The furniture shop owner has five eligible voters at his home but has 9 more voters registered under his address in the electoral rolls. “They did not remove the 9 bogus voters even after I told the block level officer that these people do not live here,” he added.

The EC is still accepting voter ID applications for those who wish to cast their vote. The supplementary electoral rolls will be published by the EC on November 19.

During the electoral roll updating process, the EC removed 5.87 lakh electors from the rolls in Telangana. The EC claimed that 1.9 lakh were removed because of multiple entries and 91,737 were removed as they shifted or migrated from the given address.

The EC also said that they even removed 3 lakh dead persons from the rolls. However, #KhabarLive found the names of many deceased persons, for whom GHMC has issued death certificates still on the electoral rolls. For example, according to the GHMC death certificate, Habib Afzal Siddique passed away eight years ago but the “purified” electoral rolls for Nampally will see him cast his vote again on December 7.

‘Voters’ like Siddique have appeared despite the Commission carrying out two massive electoral roll purification initiatives. The National Electoral Roll Purification and Authentication Programme (NERPAP) was to link and authenticate EPIC data with Aadhaar data in 2015. The EC linked 33 crore EPICs with Aadhaar before the Supreme Court put a stay on the process.

The EC then initiated the Intensive Revision Of Electoral Rolls (IRER) in 2017 that would use Geographic Information System (GIS) mapping of the voter of a given address and the polling stations where they will cast their votes.

However, a senior official who oversaw the execution of IRER in Hyderabad said, “The IRER was only partially successful, there were many ground challenges faced by the block level officers. They have to visit each and every household in an area in coordination with a police officer, this was not being strictly followed. Sometimes the houses would be locked, sometimes the equipment for mapping would not work, sometimes the police officer will not be available, the IRER needs to be dynamic in execution with everyone working together, but that’s not always the case. We had consulted with various political parties, they were all of the view that linking Aadhaar to voter IDs would have been a much better solution to purifying electoral rolls,” he added.

The Telangana Congress leader, Mohammad Feroz Khan who filed a PIL with the Supreme Court feels the quantum of bogus voters and extra voters in Nampally would severely hamper his chances of winning the elections this time also. “I lost contesting polls from Nampally in 2009 by 5,000 votes. I managed to increase my vote share in 2014 but again lost due to these bogus votes. I have seen people cast illegal votes at polling booths at both times. I am fed up,” says Khan, “The SC directed the Hyderabad High Court to hear the case. The state EC assured the court that all of these bogus voters would be removed. We gave them proof for 40,000 bogus voters but after going through the final rolls we found that only 5,000 of these bogus voters have been deleted, 35,000 of them are still on the rolls.”

The apex court directed the Hyderabad High Court to hear the Congress leader’s case, which will now be heard on October 31. #KhabarLive