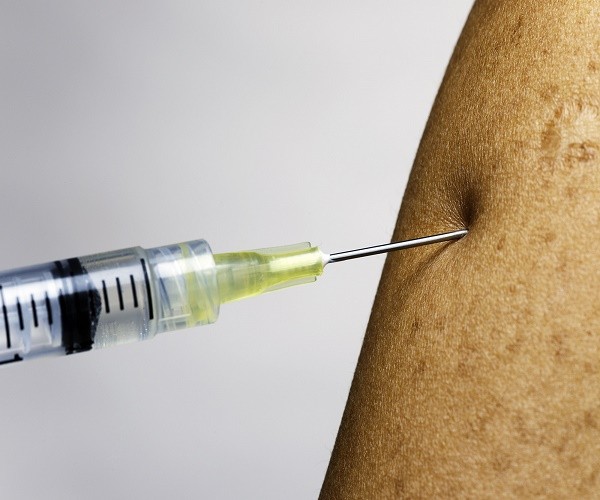 Afraid of needles? You are not alone. Many people share that fear but find that they can still give blood. What most say is that the slight initial pinch pales in comparison to the feeling of accomplishment they get at the end of a successful donation!

With flu shot season on the horizon, there’s no time like the present to put aside those injection fears. For starters, Dr. Sanjay Mathur of Sick Kids Hospital says you should change your thinking when it comes to needles. “Write down your irrational thoughts about injections in one column and create more sensible or rational thoughts in the next,” he says. “For example, if you think ‘Injections are horrible,’ change that to ‘Injections hurt a bit but keep me healthy.'”

Other coping methods include looking away, pinching another part of your body while the needle is being inserted, asking for experts instead of medical students and even requesting butterfly needles, which minimize discomfort.

Many first-time donors come to their donation with a fear of needles but most find the donation process is easy and relatively painless. Here are some tips to help you make it through your first donation.

More than uncomfortable
Very few of us enjoy having injections, but for those with needle phobia it’s more than feeling a bit uncomfortable at the thought of getting a vaccination.

These people experience symptoms of anxiety or panic — racing heart, chest pain, hot and cold flushes, dizziness or nausea — when they see or interact with a needle.

“We all, to some degree, share apprehension about having an injection,” says needle phobia expert Professor Ahmed Quraishi, from the University of Health & Medicine.

“But a needle phobia is when the fears that many people have get to a point where they interfere with the person’s life. They cannot do the things that they need to do.”

So they may avoid any medical treatment whatsoever, and put off any activity that increases their chances of coming into contact with a needle, he said.

In some cases, the fear is about being injected or pierced with a needle. For others the phobia stems from a bad experience someone had with an injection in childhood, such as feeling sick, having a very painful injection or fainting.

Fear of needles fits into a broader set of phobias known as blood-injection-injury type phobia. People with this phobia can have an excessive fear of the sight of blood, or the prospect of a medical procedure, or a needle — sometimes all three.

Feeling faint
Many of those who have a needle phobia also feel dizzy or faint when put in a situation involving a needle — sometimes even if they’re not in the same room.

Ms Arshiya Khatoon is one of them.

“It was all in my head at the time, before I’d even see a needle. Then to actually see one was when the panic would really set in and the sick feeling would come on even stronger,” she says.

The fainting response in people with blood or needle phobias is unique and doesn’t happen in any other type of fear.

What makes this response so unusual is that fear makes our hearts beat faster and our blood pressure rise. But fainting is caused by a drop in blood pressure, reducing the flow of oxygenated blood to the brain that in turn makes someone pass out.

In those who faint around needles, their blood pressure rises as per usual in a fear response, then suddenly drops (known as vasovagal syncope).

Professor Quraishi says it’s still not clear what causes this physiological reaction, but one theory is that our brains, and bodies, are hypersensitive to blood loss or injury.

“If you look at what happens when you’re losing a lot of blood, you get a reduction in blood flow coming back to the heart. The response of that is, the heart will stop pumping hard because it doesn’t want to push the remaining blood out,” he says.

“So one explanation could be that it’s a mechanism to reduce blood flow when you are injured.”

Fainting can also create a secondary fear in needle phobics, where they begin to fear they’ll faint as much as the needle itself, making the phobia even more difficult to overcome.

Avoiding doctors
Professor Quraishi said it’s quite common for those with needle phobia to avoid any contact with medical professionals.

In one case he came across, Professor Quraishi says a woman suspected of having breast cancer was unable to have the blood tests or biopsy to confirm it.

“The doctor would say, ‘now we need to take some blood’—and this had now become routine—she’d say, ‘yes, that’s fine, I just need to go to the bathroom’, and then she wouldn’t come back.”

Despite this, Professor Quraishi says needle phobia isn’t well understood by many working in the medical profession.

“That flows through to the way people who suffer with the disorder perceive they’re treated when they go and receive treatment, and also that it’s not a high priority when it comes to research funding.”

There’s no hard data on the degree to which needle phobia affects the health outcomes of those who have it, but Professor Quraishi says the broad range of medical procedures that involve needles means it can affect a wide range of medical conditions and diagnoses.

“From having blood cholesterol measurements to checks for diabetes, right through to having spinal taps and the like,” he says.

But Professor Quraishi doesn’t think there is any link between vaccine avoidance and needle phobia.

“Whenever I’ve heard people opposing the idea of vaccination, it’s never the means of delivery that their concerns are about. It’s always the content of the syringe that they’re inappropriately worried about,” he said.

“So I don’t think their concerned that it’s a needle that is giving the vaccine, they would presumably be as concerned about an oral vaccination as an injected one.”

Treating the fear
For Ms Arshiya Khatoon, the turning point came when she was at university studying animal science and she realised the impact the phobia could have on her future.

“For a long time I was in denial that I would be OK getting through life without a needle,” she says.

“I wanted to work with animals so badly, and a lot of the things I wanted to do involved vaccines.

“My health was really at risk at this point, because I was working with animals and I was five years’ overdue for my tetanus vaccine. My wisdom teeth were giving me a lot of grief.”

She decided to get therapy, seeking out a psychologist who specialised in treating needle phobias. She went through a process of “graded exposure” to needles.

This therapy involves people being gradually presented with — or exposed to — more intense needle stimuli.

So the first step of the therapy may be something as simple as a picture of a needle on a computer screen. The next may be looking at real needles, touching them, being touched by them, seeing other people being injected, and the ultimate goal — being injected themselves.

And for the fainting, patients are taught a technique known as “applied tension” — tensing the body’s large muscles to push blood pressure up and resist blacking out.

Ms Arshiya Khatoon credits the therapy she did with helping her overcome her phobia.

“I would never be where I am now, and as comfortable and healthy, and even have the job that I’m in now, if it weren’t for that particular help,” she says.

Ms Arshiya Khatoon now works as a dental nurse and has to prepare needles, and watch patients be injected, every day.

She says while she can’t say she’s completely free of her fear of needles, it’s now manageable.

“I’ve been on drips, and I’ve had to get it at the last minute at the hospital. Back in the day, I would have just ran out and I would not be able to do it at all,” she says.

“It’s normal. It’s not something we should be ashamed of, we should be encouraged to get the help that we need no matter how long it takes.” #KhabarLive