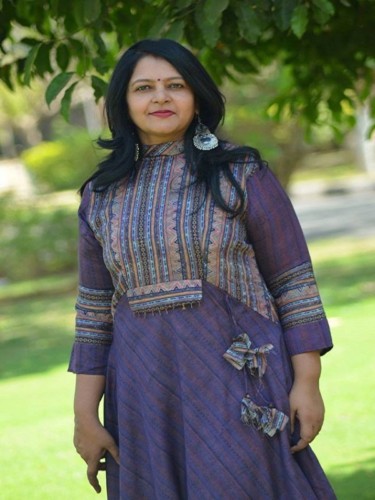 An influential public figure, one of the few women producers in Telugu Industry and the lady who fought against racial discrimination in the United States, Neelima Tirumalasetti is now nurturing young writers with Nikhil Chandwani through Writers Rescue Centre.

She can find a talent in everyone and her ways of molding humans into someone who could sustain well in this tough working environment, and her will to face failure without even thinking twice made her one of the unsung heroes from South India. A heroine to be precise. A lady that helped the aspiring talents, a lady that challenged the system. A woman that prevailed with a bright smile.

When we look back at her life and all the things that transpired, we can’t help but feel inspired.

So many crossroads, a journey to remember and learn from this amazing lady.

Neelima was born in a small coastal town, in Andhra Pradesh, South Eastern Part of India.

She used to go to school on a Hero Puch, a small motorcycle, which was definitely a huge thing for anyone at that time in her town.

Everyone admired her courage and that brought her the confidence. The much-needed confidence, in an age, younger than most others. She was inspired by her great-grandmother who was a widow, but that did not stop her from pursuing her business.

Neelima married the love of her life at an age of 21 and moved to the United States.

The North American continent was all set to bring in a much-needed change.

She studied IT in the United States and later, started to work. A working lady, she was passionate about technology and helping others.

It was in the year 2004, and I know many of you might have heard about it, Neelima was racially abused because her company started to outsource work to India against the wishes of local employees.

Rather than being victimized and keeping silent, she decided to give it back. She fought the Fortune-50 Company in court and after years of struggle, she was able to bring a change in laws.

Her case was miraculously discussed even in the Indian Parliament.

With tough guts, and the will to provide the save environment to employees from different ethnic group and race, Neelima’s case brought in a change of laws in the United States.

The company amended a lot of the guidelines in their policies to treat everyone fairly. It became a global movement and brought a lot of awareness to Indian communities across the globe.

In 2008 she returned back to India as she wanted to be close to family and more importantly, she wanted to raise her children in India. She was happy being in India with her parents around and quietly settled into a satisfied life of a housewife.

An accidental meeting with Power Star Pawan Kalyan changed her life and brought her to the road that she never dreamed off. Kalyan wanted her to help him with his Yuvarajyam wing (part of prajarajyam party started by his brother Chiranjeevi) as the spokesperson.

It was a complete surprise for her.

She wasn’t expecting to be involved in any form or fashion with anything political.
True to her nature, she did not question the opportunity. She just jumped headlong into the role and did everything that she could do in that role.

It was an immensely satisfying role meeting with so many political leaders and understanding the dynamics of politics.

The next steps she took was a road indeed less traveled by.

She went on to become one of the few Women Producer in Telugu industry. With no background and no links with any association, she produced a highly appreciated film Panjaa, starring none other than Power Star Pawan Kalyan.

The film made a way to a lot of other impressive projects where she launched dozens of young and unsung artists, filmmakers through her production house- Sangamitra Films.

The process of putting together the team was very challenging – from artists to music directors, from set designers to stunt masters, from choreographers to editors, from special effects to sound engineers- It was a very enriching experience in her words.

Putting together the technical crew, identifying shooting locations, selecting the required equipment, logistics of travel, catering, lodging and accommodation, coordination of artists were other very challenging tasks that she had to learn and more importantly execute on a daily basis.

Being a woman makes the task twice more difficult. Especially in the film industry which is male-dominated. The technical crew or for that matter the artists are not used to taking even suggestions from a woman producer. Her only solution to this problem was becoming one among them.

She would spend her time from story discussions to music settings to working with the crew on a daily basis. This time that she spent with them built for both her and them the required trust and confidence in her abilities.

Simple things like spending time with them during their breaks, eating lunch with all of them – all went a long way in building the trust and confidence. Slowly but surely, she gained their trust and this helped her immensely in getting things accomplished as a team

ALSO READ:  Several Amateur And Professional Players Back To Ground With Energy And Confidence Amid Pandemic In Hyderabad

Sangamitra Films, the production she started, brought in real talent from various sides of life and under the vision of Neelima Tirumalasetti, the production created stars and filmmakers of tomorrow.

Imagine a center that mentors, edits, publishes, and helps carve a career for writers.

Nikhil Chandwani, the 24-year-old author hailing from Nagpur, discussed this idea with Neelima Tirumalasetti when they both met at a TEDx event in Hyderabad.

Neelima, with her inclination towards helping others, readily took steps with Nikhil to start the center.

This idea became a plan, and then an office, which was recently inaugurated in Hyderabad.

The center has helped over 180 different writers coming from various aspects of life. Depressed, suicidals, unhappy youths found happiness by seeking mentorship in writing and their books were published.

The students are TED(x) Speakers, inspirational icons that are leading young India in various fields, after mastering the art of storytelling.

1. How to write/writing basics
2. The Art of Storytelling
3. The flow of the book and how it is carved
4. Every day, brainstorming about the story and how it is shaping up.
5. Editing, once the book is ready, and Proof-Reading of the manuscript.

Neelima gave wings to this plan by co-founding the center. #KhabarLive