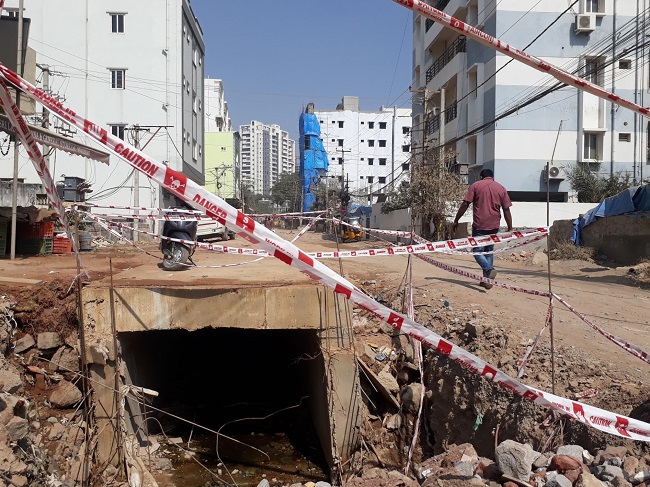 Besides making it a risky ride for commuters, the constant digging work has affected many residents in the area.

A large cloud of dust engulfs Babu Khan lane near Gachibowli in Hyderabad, where road repair works have been ongoing for close to a year.

Besides making it a risky ride for commuters, as only one car can fit in the lane at one time, the constant digging work has affected many residents in the area.

“Earlier, we used to get many customers, but nowadays they prefer to walk to the other side of the lane and catch an auto from there, as this side is filled with dust,” says BK Naik, an auto-driver in the area.

Naik says that the road was once a neat shortcut, connecting to the Gachibowli signal near the Outer Ring Road (ORR).

However, almost a year ago, two repair activities were taken up by the Greater Hyderabad Municipal Corporation (GHMC) of laying a new road and fixing a drain.

“The work has been never-ending and it has become a trouble even to get from one side of this road to the other. We just end up taking a 5-km detour to save us the trouble,” he adds.

Ram Murthy, a shopkeeper in the area, echoes Naik’s views.

“We can’t keep anything open, or else dust goes inside. We have to constantly sweep a large quantity of mud that gathers inside and outside the shop, even if the shutter is closed. Even my customers have tried to avoid coming, if they can,” he says.

“We are all irked with the contractor and the GHMC. What if someone gets into an accident on the narrow road. Who will take the blame?” he asks.

While some locals said that there had been accidents, where two-wheelers had fallen down, others pointed out that their vehicles were stuck in their parking lots.

“I haven’t been able to take my car out for weeks now. I have been walking to the main road and availing public transport to go to work. Even the school bus which used to pick up my son, now waits far away as it can’t enter the road beyond a certain point,” says Suresh, a techie.

When KhabarLive spoke to a contractor present at the spot, he claimed that he was hired to lay only one half of the road.

“The other half of the road is being taken care of the GHMC as pipelines also have to be laid. This side of the road will be finished in two weeks,” he claimed, while not wanting to be named.

However, the GHMC claimed that the project is still at the initial stage, and will take at least five months to complete. #KhabarLive