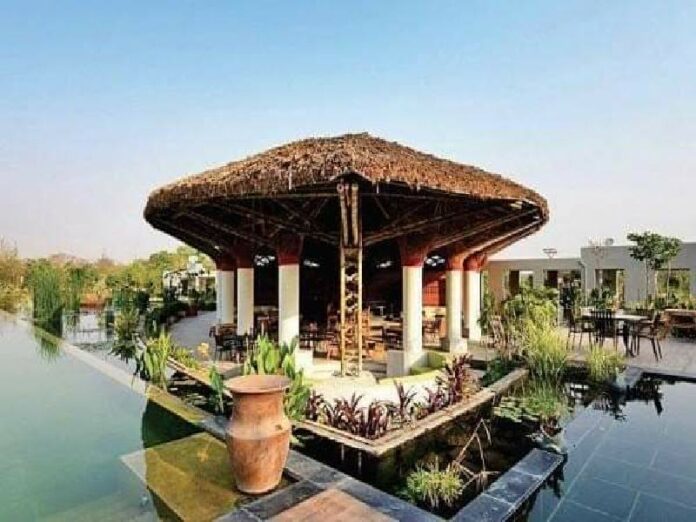 The idea of a ‘perfect world’ is unrealistic. Nagesh Battula, founder and managing director, Organo, would agree. Responsible for a Hyderabad-based eco-habitat founded on the core philosophy of Samavriddhi—prosperity for all—Battula believes in blending rural experiences and urban conveniences.

This has resulted in their award-winning housing project—Organo Naandi. In this journey, learning and unlearning established norms, and figuring out intersecting solutions becomes more important than targeting an ideal state,” says Battula.

Built on 36.5 acres and housing 73 villas on the outskirts of Hyderabad, it was recently covered by BBC in its highly acclaimed Building a Better Future series. And better it is—the organisation prides itself in being a net-zero energy community. Organic farming, earth air tunnel draft system, zero disposal of organic waste, zero wastewater discharge, in-house production of natural fertilisers and pesticides, usage of local materials for construction, are among its most talked-about values.

Also, a lush afforested 15-acre land earns it the top spot. Architecting eco-habitats, community building and outreach are Battula’s calling cards. Almost a decade ago, he realised that it’s People, Planet, Profits that should be his building core. It laid the foundation for Organo. Spurred on by the success of the pilot project, his team has launched Organo 2 in Hyderabad.

“We want to make this new way of life mainstream and develop products that are affordable to most segments of the society,” says the entrepreneur. Currently, the team is looking at expanding operations to a few more projects in Hyderabad and Bengaluru, and is mentoring a community in Nizamabad.

Rather than looking at these seven areas independently, Organo has packaged a holistic solution where each of those seven strands affects each other,” says Battula. The residents at the eco-habitat are from all walks of life—senior executives in IT, businessmen, scientists, advocates, people from the art background, etc.

These residents are in the age group of 35 to 50, with kids in school to retired parents who want to lead a healthy and slow life. This vibrant community has adopted a newer way of living and made Organo Naandi India’s largest collective farming community. Battula says, “The Organo way of living is a movement, a change, a new wave of thought.

The residents of this community have a ‘Rurban’ lifestyle—a term coined by them. My dream as an architect was, is and will be to create and establish Rurban communities across the globe that blend the best of rural and urban advantages.

ALSO READ:  The 'Online Teaching' Business - A Real 'Setback' For Teachers In Telangana

People and Planet must feature along with Profits in every developer’s balance sheet if we want to leave back a legacy for our future generations. People inherently do not seek out to destroy the bio-diversity and the planet at large. If a way forward is shown, we choose to believe that people will walk that path.”

Also, having been in very close quarters to the construction industry and watching the growth spurt of Hyderabad, protecting the bio-conservation zone has been of paramount importance to the team. “We believe that we have a responsibility to our children to provide them with a world that is better than it is now. If we don’t, then who will?” Battula asks. Indeed, who will? #KhabarLive #hydnews