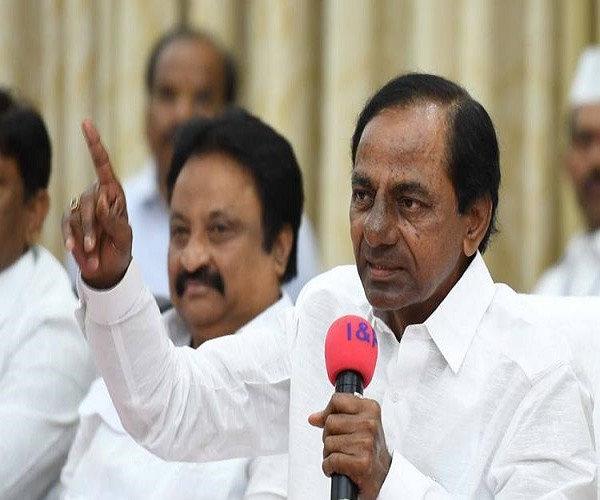 “Hame ek Congress mukht aur BJP mukht Bharat chahiye (We need a Congress-free and BJP-free India),” he declared at a packed hall of mediapersons in Telangana Bhavan here on Tuesday.

He vowed to bring together all regional parties in the country to form a credible alternative to both the BJP and the Congress to ensure a qualitative change in the country’s political scenario.

Rao said the TRS would give a new definition to national politics and play a crucial role in putting an end to the stereotyped process as well as establishing a non-Congress, non-BJP government at the Centre.

He said there was a deep political crisis in the country and a complete overhaul was needed in the economic, political and agricultural sectors where the country was lagging behind many other countries.

He felt that Telangana had shown the way forward to the entire nation through novel schemes such as Rythu Bandhu and Rythu Bhima, which were praised by agro scientists and economists.

“Within next 10 days, the modalities of the Federal Front would be declared in Delhi. We have already prepared a draft and will be arriving at a working model which will be released in all Indian languages. Our aim is not just alignment of political parties, but unification of people which can be achieved only through a new economic and agricultural model using a new political system,” he said.

The TRS president stated that he had already interacted with political leaders, economists and political analysts to understand how a Federal Front could be built. He said he was meeting some leaders from Delhi at his residence later in the evening.

“There are about seven to eight leaders who have arrived at my residence. We will discuss how to effectively build an alternative to the BJP and the Congress for the 2019 elections,” he said. He reiterated that earlier fronts tried to unite political parties, but the Federal Front would instead unite people.

Responding to a question seeking names of political parties which could be part of the Federal Front, Chandrashekhar Rao stated that the front would be open to all regional parties.

When asked about his willingness to work with Andhra Pradesh Chief Minister N Chandrababu Naidu, he pointed out that there were many regional leaders and was not willing to focus on any single person. “Leave that poor chap alone,” he added.

“Telangana has shown the way,” he said, explaining that Prime Minister Narendra Modi, BJP national president Amit Shah, UPA chairperson Sonia Gandhi, Congress president Rahul Gandhi and several other senior politicians from various parties, came to campaign in the State but could not make any dent. He reiterated that the people were fed up with the two major national parties — BJP and Congress. “The Congress might have won in three States defeating BJP, but that is only because there was no popular alternative,” he said.

Rao said once he ensures that the new government settles down in the State, he would head to Delhi to start working on national politics. “Very shortly, you will see me very active in national politics,” he said. Emphasising the need for India to tackle the ‘arrogance’ of both the BJP and the Congress first, he felt that there were still four months left before the general elections, giving ample time to formulate an alternative.

The Chief Minister also reiterated his party’s ‘friendly’ status with the AIMIM, calling its president and Hyderabad MP Asaduddin Owaisi a great debater and intellectual who will play a crucial role in the Federal Front in bringing all the minorities together onto a single platform at the national level. “I am with Asaduddin Owaisi because he is a secular leader,” he said adding that the duo would tour the country to garner the support of leaders and people.

When asked whether he would delegate responsibilities in the State to any other person considering his larger role in national politics, Rao said he was comfortable to work from Hyderabad which was geographically located in the centre of the country and needed only a few hours of flight journey to reach any corner in the country. “I will take a decision on these things when things get serious at the national level,” he said with reference to delegating the party leadership and the Chief Minister’ post to others in the party.#KhabarLive