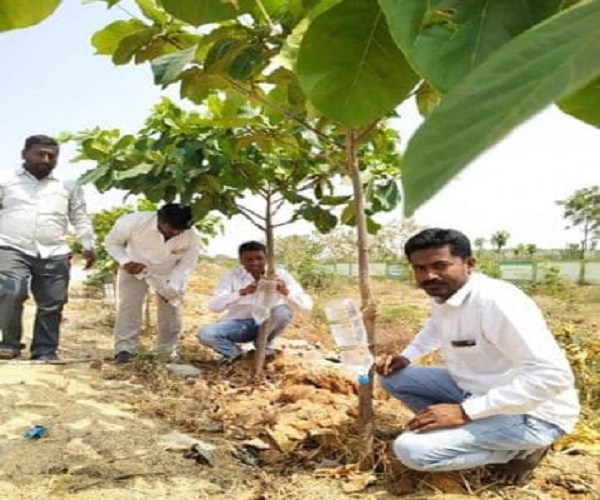 The inverted bottles have a small hole in its cap, which allows water to trickle down to the plants’ root round the clock. Protecting plants and watering them regularly seems to have turned into a people’s movement in Siddipet following a call by former Irrigation Minister and MLA T Harish Rao.

In fact, the trend can be attributed to Siddipet Horticulture Officer Samala Ilaiah, who tied a two-litre plastic water bottle to a sapling to allow water trickle down to the roots.

Impressed with this, Harish called upon councillors, officials, TRS leaders and the people to replicate the technique at their houses. The citizens followed suit and posted photos on social media, turning the trend into what’s being called the ‘water bottle challenge’.

Iliaiah posted a picture of his technique on a WhatsApp group run by Harish’s followers. The Minister instructed his personal assistant Ramu to do the same for all saplings at his home in Siddipet town. Ramu did so and posted pictures on the WhatsApp group.

Meanwhile, Municipal Chairperson Kadavergu Rajanasu and councillors also tied bottles to all plants at their offices and residences. The word spread like wild fire in Siddipet as citizens took part in the challenge actively in every nook and corner by tying the bottles to saplings planted under Telangana Ku Haritha Haram.

The inverted bottles have a small hole in its cap, which allows water to trickle down to the plants’ root round the clock. One has to fill the bottle every morning and evening.

The move came after Harish saw some plants withering away due to lack of regular watering during the summer. He instructed Horticulture Officials to make some arrangements to protect the saplings. That’s when Ilaiah came up with the idea on Wednesday.

Not only in Siddipet town, citizens from across Siddipet constituency started doing the same. TRS leader from Ibrahimpur, Yella Reddy, also posted pictures of the technique he implemented in his area. He said the responsibility of protecting plants would be given to residents.

Meanwhile, the rain also provided some respite from the blostering heat in Siddipet town, which received light showers on Wednesday evening. But, Harish asked citizens to continue the practice all summer. #KhabarLive