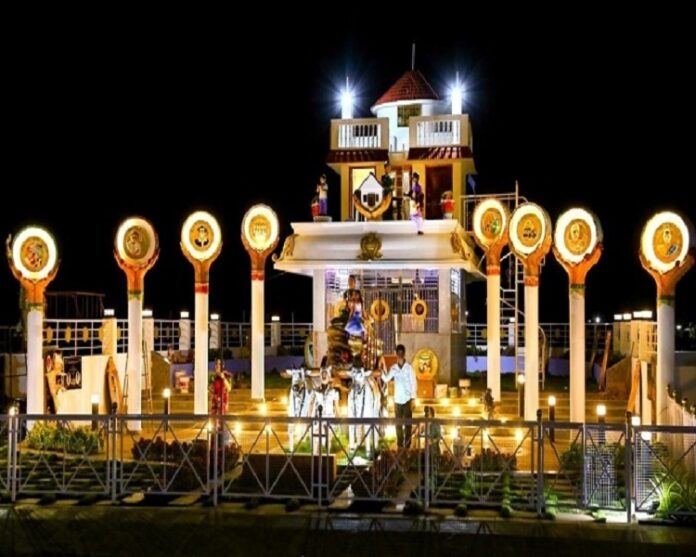 Political leaders go to any extent to be in the good books of their bosses so that they could get some good positions including cabinet berths or even the party ticket in the elections. Sycophancy is the hallmark of today’s politicians.

He has constructed a temple for Jagan Mohan Reddy to display his unflinching loyalty and reverence towards the chief minister.

The temple, which is nearing completion, is all set for consecration shortly. It resembles any other temple of a Hindu god and also has a lot of specialities.

Apart from the idol of Jagan in the sanctum sanctorum, there are different mandirs for each of the Navaratnalu (nine jewels) – the nine welfare schemes introduced by the Jagan government. There is also a hall of mirrors, reflecting the welfare rule of the chief minister.
Apparently, Madhusudhan Reddy wants to show his respect for Jagan, who had given him party ticket despite losing the seat in 2014.

Claiming himself to be an ardent devotee of Jagan on the lines of Hanuman for Lord Rama, he said he was displaying his devotion towards the chief minister.

“If you ask me whether I want my wife and children or Jagan Mohan Reddy, I will prefer the latter. If Shah Jahan had built Taj Mahal for his wife, I have constructed a temple for Jagan for the sake of the people,” he asserted.

Interestingly, another temple for Jagan is also coming up at Gopalapuram in West Godavari district. This temple is being constructed by local MLA Talari Venkat Rao adjacent to Jagananna Colony, where the poor are allotted house sites.

“I have decided to construct a temple for the chief minister, who has earned a special place in the hearts of the poor people by taking up several welfare schemes,” the MLA said. The temple, however, is yet to take off.

There are some blind “bhakths” as well, who take this sycophancy to newer heights by constructing even temples for their political bosses.
We have seen temples built for former chief minister of combined Andhra Pradesh Dr Y S Rajasekhar Reddy at several places like Rajagopalapuram in Visakahapatnam, Chennareddypalem in Nellore and another one in Kadapa district.

In Telangana, too, a temple was built for Telangana Rashtra Samithi president and chief minister K Chandrasekhar Rao at Rajendranagar in Hyderabad.

There was an attempt to build a temple even for Telugu Desam Party president and former Andhra Pradesh chief minister Nara Chandrababu Naidu at Harischandrapuram village near Thullur in Amaravathi, but it did not materialise.

ALSO READ:  Why Citizens Not Serious About GHMC Elections 2020 In Hyderabad?

Undoubtedly, Jagan has emerged as the most popular chief minister of the state by winning a record number of 151 MLAs in the last assembly elections and has become a cult figure for his party leaders.

Naturally, his party leaders have started deifying Jagan’s image to project him not just as a god’s gift to the people of Andhra but a god himself, with an obvious intention to get into his good books so that they would get some good positions. #KhabarLive #hydnews