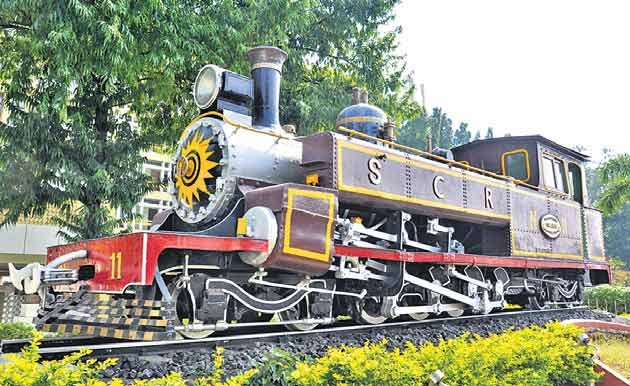 The railway saloon car in which the Nizam of Hyderabad, alongwith his family used to travel, is a heritage lovers’ delight. The wood-bodied, four-wheeler inspection carriage (saloon) was built in 1886 to recreate a homely environment while ensuring the comforts of a home with bedrooms, bathroom, a well-equipped kitchen and dining hall!

This saloon also had a kitchen which was used to prepare a range of dishes from where fresh food would be served throughout the course of the journey of the royal entourage. The bedroom was equipped with two air-coolers, while bathrooms had additional facilities like hot/cold water.

The saloon is a slice of history that South Central Railway (SCR) is showcasing as part of Heritage Railway at the Carriage Workshop, Lallaguda. According to the SCR, built in 1886, the Nizam’s Guaranteed State Railway’s wood-bodied inspection carriage was restored in 2006 and is being well maintained at the workshop.

Visitors keen to have a glimpse of the priceless heritage that the Railways has on offer can visit the saloon with permission from the authorities. “We are preserving the railway heritage in the city to recreate the past. Railway heritage comprises the old railway engines or coaches, which were preserved, depicting a period in the history of rail transport,” a senior official said.

Also on display is the Sir Alec Steam Loco which was built in 1907 by Kitson and Co, Leeds, a prized possession of the . This can be visited and appreciated at Rail Nilayam, Secunderabad. The loco has been beautified with poly-urethane painting besides adding a dash of colour lighting.

Officials said the main attraction, which is bound to catch the attention of the public is the special effects of artificial steam and smoke generation and loco running sound system provided to it to generate artificial simulated condition of a steam loco on the run.

Not just for Nizam Saloon, the Carriage Workshop at Lallaguda has become a spot from heritage railway. The Integral Coach Factory which built MG Inspection Carriage, a meter gauge coach (saloon) in 1970 and a wagon built by Birmingham and Wagon Company, Smethwick, England in 1920 were restored and installed here.

That’s not all, a fire alarm bell weighing 83 kg and made of bronze in 1925 is also restored. The bell was used to indicate fire accidents in those day, officials added. Even at Kacheguda, two air-conditioned meter gauge AC lounge car coaches, which used to run in Rajasthan, are showcased. The ambiance here has been developed with elegant canopy styled seating amid greenery. #KhabarLive