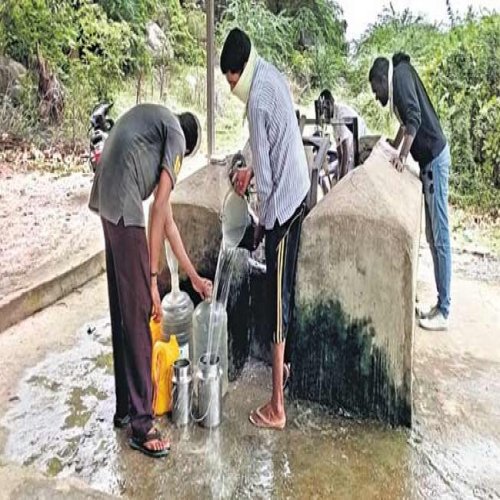 The water from this historic well was once used to quench the thirst of the Nizams, the rulers of then Hyderabad State. Centuries later, it is still believed to have the same medicinal properties.

Located at Molangur Fort near Karimnagar town, about 170 km from Hyderabad, Dood Bowli or milky well is always thronged by people from Molangur and surrounding villages.

Dood Bowli (not to confuse with Doodh Bowli in the old city of Hyderabad) still serves many people, who believe that its water, which is as white as milk, can cure many ailments.

It is said that water from Dood Bowli used to be transported in horse-drawn carriages every day to Hyderabad for personal consumption of the Nizams, as the Asaf Jahi rulers of the princely state of Hyderabad were known.

People from Molangur and more than a dozen surrounding villages can be seen thronging the well and carrying cans of water to their homes.

Though Molangur, like other villages, is getting tap water under the Mission Bhagiratha programme of the state government, majority of the villagers prefer water from Dood Bowli for drinking purposes.

Narahari Buchi Reddy, a former sarpanch of the village, claims that hardly anyone in the village has had any health issues.

Many villagers believe that people who use water from Dood Bowli don’t take ill. Some believe that it even has a cure for kidney ailments.

It’s not just the people in the surrounding villages, but visitors to the fort and the officials in Karimnagar town also prefer water from Dood Bowli.

The 24-feet-deep well almost dries up during the peak summer, but in the remaining part of the year, it has enough water. During monsoon, water oozes from it. Since monsoon also brings with seasonal diseases, people from various villages fetch water from the well. They believe the well has miraculous power.

The fort is believed to have been constructed by Voragiri Moggaraju, one of the chief officers of Prathapa Rudra of Kakatiya dynasty in the 13th century. It used to serve as a transit halt for Kakatiyas travelling from Warangal Fort to Elgandal Fort in Karimnagar.

Locals, however, lament the neglect of both Dood Bowli and the fort. They have been demanding the public representatives and officials to develop the fort and the well to tap their tourism potential.

“We believe the fort and the historic well with lush green surroundings can attract many tourists. They can be developed into sites of tourist attraction,” said former sarpanch Marati Venkateshwarlu

The local people have also been demanding a halt to granite quarrying around the fort as they believe the activity is damaging the fort and polluting water in the historic well. #KhabarLive #hydnews