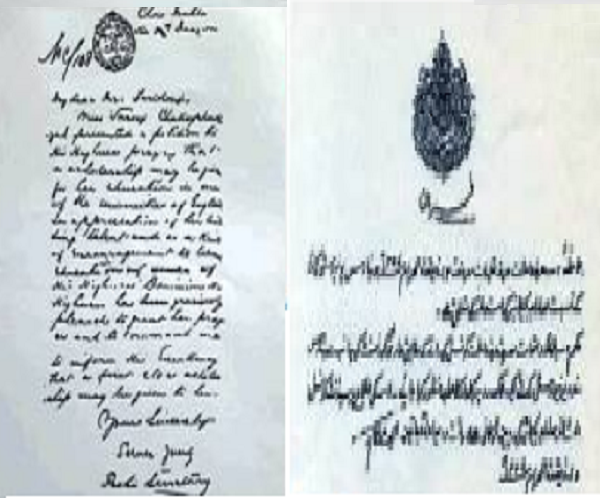 With Mir Osman Ali Khan, last Nizam of Hyderabad, projected in poor light by certain political groups in the recently concluded Telangana election campaign, one of his grandsons has now dug into the state’s archives and pulled out old Hyderabad’s royal firmans to prove Nizam baiters wrong.

Nizam’s grandson, Najaf Ali Khan, is busy collecting royal orders and rare documents from various sources. He released a firman by the Nizam VII granting financial assistance to Banaras Hindu University (BHU) on January 7, 1939 to mark the 80th anniversary of the royal order. He also released a firman granting scholarship to nightingale of India Sarojini Naidu on December 20, 1894 to pursue higher studies in London. The firman completed 125 years on December 20, 2018.

“Pandit Madan Mohan Malviya had appealed to the Nizam for financial assistance to sustain the university. The Nizam responded immediately and donated Rs 1 lakh. Interestingly, when Aligarh Muslim University (AMU) appealed for help soon after, the Nizam donated only Rs 50,000. This shows the Nizam was secular,” Najaf Ali Khan told #KhabarLive. This Monday (January 7) marks the 80th anniversary of the BHU donation and the event should not go unremembered, he said.

Referring to the scholarship granted to Sarojini Naidu by Nizam VI, Mir Mahbub Ali Khan, he said the royal firman was issued 125 years ago. “The firman was signed by Server Jung, Peshi secretary to Nizam VI, on December 20, 1894.

The scholarship was first class in nature to enable Sarojini Naidu to pursue higher education in one of the universities of England in appreciation of her leading talent and as a kind of encouragement to liberal education of women of the princely state,” Najaf Ali Khan said.

He said he had collected a number of documents of the princely state and their perusal reveals several interesting facets of the Nizam’s reign. “The Nizam continues to be the most maligned princely ruler in India though he had introduced several reforms.

Many politicians still dread to take some of the Nizam’s bold decisions like abolition of death penalty,” he said adding that he would compile a book of the royal orders on generous grants to institutions and individuals. #KhabarLive