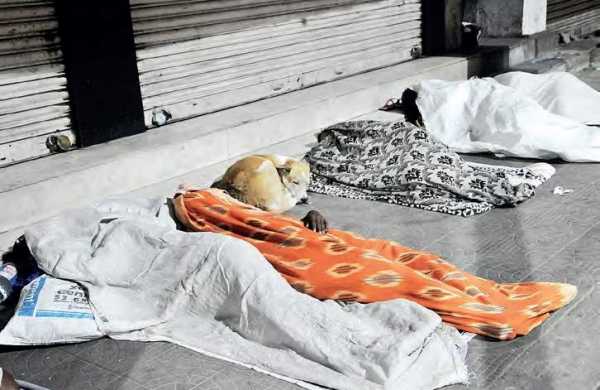 A person named Lakshman of Mahbubnagar came to Hyderabad to work as a carpenter in Nizampet. He is one of the may who sleep under the stars this bone-chilling winter, unable to get accommodation in a shelter home as they have no Aadhaar card to prove their identity.

“I asked few of them to allow me inside, but they said Aadhaar card was mandatory,” he says. Lakshman has been sleeping on an empty space outside the GHMC shelter home in Begumpet for the past five days. When KhabarLive met him on Saturday; temperature that night dipped to 13 degrees centigrade.

Interestingly, there is no official order to this effect. But citing security as the primary concern, the 12 functional shelter homes in the city ask for Aadhaar details before letting anyone stay overnight. Activists say the civic body is flouting norms under Deendayal Antyodaya Yojana-National Urban Livelihood Mission and denying shelter to those in need.

As a result, a majority of shelter homes in greater Hyderabad are catering more to job-seekers coming from other districts than to homeless people. “There are many job seekers like me who are staying here while looking for a new accommodation,” says 42-year old Nagabhushanam.

“Four copies of photograph and Aadhaar card are needed to stay here,” says the in-charge of RK Puram shelter home. “Photos can be submitted later, but Aadhaar is a must.” When asked if the home would help those without Aadhaar get registered, he refused to answer saying he was busy. The home has 17 beds and several inmates have been staying there for over a year.

“Officials say ID cards are necessary to control thefts in shelter homes,” says K Prasadm chief functionary of an NGO that runs a shelter home in the city. “After a few thefts were reported, Aadhaar became mandatory. We do not want to take any chances.” Similar opinions were echoed by caretakers at several other shelter homes.

“Aadhaar has become the norm now and we ask for it whenever someone comes seeking admission. We will try to help them get it in case they do not have it,” says D Soujanya, project director, UCD, GHMC. #KhabarLive