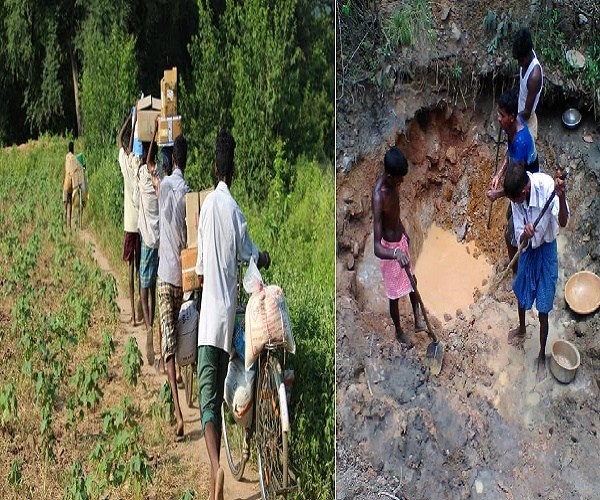 Several hundred Guttikoya tribals in Telangana’s Bhadadri Kothagudem district, especially in the forests close to Bhadrachalam, have approached authorities stating that they lack basic amenities like electricity, roads and lack of access to drinking water.

The adivasis, led by Dr Naren Narender who has been working in the region for the last few years, met with Kothagudem District Collector Rajat Kumar on Monday.

Speaking to #KhabarLive, Dr Naren said that he was working with around 149 hamlets spread across a 60-km radius where 25,000 to 30,000 Gond adivasis reside. Many of the tribal people had migrated from Chhattisgarh over the last 30 to 40 years, he adds.

“While 70 to 80 hamlets are on the road itself, the remaining are in interior areas and don’t have any road connectivity, and in around 40 to 50 hamlets, water shortage is the biggest issue,” he says.

The summer has only made things worse as temperatures across northern Telangana have shot up.

“In these hamlets, adivasis have no access to drinking water and have to dig at dried up streams. They dig for around four to five feet before some water oozes out from the ground. In this manner, they manage to collect around 10 litres every hour,” he adds.

Health issues galore
Dr Naren says that the tribal people lack access to basic healthcare as the closest town Kothagudem is many kilometres away, while even the nearest Primary Healthcare Centre (PHC) for most of them includes a long trek by foot before they reach the nearest road.

“Malnutrition is the predominant issue. Infant mortality rate (IMR) and Maternal mortality rate (MMR) are high because women are forced to deliver at the hamlet itself. The risk is also high because many of them are anaemic. Diarrhoea, malaria and seasonal fevers are also common,” Dr Naren says.

“The malnutrition problem is so severe that it even causes night blindness in some cases due to Vitamin A deficiency. Pre-term deliveries are also common due to the malnutrition,” he adds.

Anaemia screening was conducted on 35 pregnant women in the region and the results (a copy of which is with #KhabarLive) showed that a staggering 34 women showed signs of anaemia.

“I began working here in 2017 after giving up my private practice as I wanted to serve society. I picked this place as there were over 13 deaths in two years and they were living under the worst conditions imaginable. Many infants were dying within a day of being born due to respiratory distress. After our intervention, we managed to bring the figure down,” Dr Naren says.

Another issue for the adivasis is that they have no ST certificate from the state government.

“As a result, no government schemes apply and there is only occasional humanitarian help that they receive from authorities. For example, we managed to fix a few solar lamps with government help as the locals have no electricity,” says Dr Naren.

“Another issue is that as they are living in plots that come under a wildlife sanctuary and a reserve forest, they have no pattas (land documents). They mainly depend on agriculture, growing cotton for commercial use, and paddy and pulses for personal consumption,” he adds.

With resources scarce and many adivasis forced to trek with pregnant women in make-shift stretchers, Dr Naren and his team have trained one person who visits three hamlets a day on his bike to conduct basic medical check-ups and recommend visiting a doctor whenever necessary.

Elections delaying work
District Collector Rajat Kumar is also the Chief Election Commissioner (CEO) for Telangana and Dr Naren says that this has resulted in delay in sanctioning the work.

“The officials have showed some initiative, but with one election after another in the state, they have been busy. After May 23 when the final results are out, maybe there will be progress,” Naren says.

“We bought a rickshaw which we converted into an ambulance to take pregnant women to the nearest PHC. While the government did come forward to give more such vehicles as they can navigate the terrain, the Model Code of Conduct (MCC) is delaying the project,” he adds.

Demands
The adivasis are demanding that a mini-anganwadi centre be set up in the region to tend to women and children in the region.

“A basic health check-up also has to be done by a visiting doctor at least once a week. We did start a small school with the help of friends, it now has 87 students with the government paying wages to the teachers under National Child Labour Project (NCLP). There is still a dire need for many more resources and also a self-sustainable solution,” Naren says.

After meeting the Collector on Monday, the locals are hopeful and said that authorities promised to visit them and take note of their issues soon. #KhabarLive