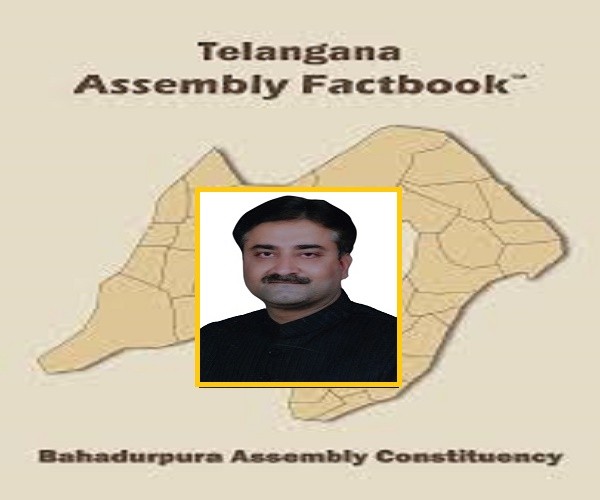 Mohd. Moazam Khan of All India Majlis-e-Ittehadul Muslimeen (AIMIM) won the seat for the second time with a record majority of 95,045 votes in 2014 elections. It is meant to be the most safest seat for the party due to majority of AIMIM cadre and leadership belongs to this place and having ancesteral properties and businesses.

After re-elected as MLA in his second term Maozam Khan was more confident from that victory, people had huge expectations from him because there are many issues like they were facing in the area like the sewerage problem.

here are quite many civic problems pertaining to sanitation, water scarcity and sewerage. A few storm water drains need to be widened or remodelled.

Ms Aliya Begum complained that her house has not getting water supply for the last two months. More complaints of polluted water being supplied to households in Bahadurpura assembly constituency are being recorded. Now residents of Do Pahad Dar-gah, Chandulal Baradari and Bilalnagar have complained of polluted water being supplied to the colony. The locals have alleged that the HMWS&SB officials are turning a deaf ear to their grievances.

Dr Idris Ansari, a local resident, complained that for at least one hour after water is released, they receive polluted water. “We just open the tap and allow the water to flow out. Only after an hour, once the water clears up and we start getting clean water do we fill containers to use for washing clothes or watering plants. For bathing and drinking we use water sourced from purified water suppliers”, said Mr Ansari.

The residents claim that they have been facing this issue for the last several months and had also brought it to the notice of the officials concerned.

Ms Aliya Begum complained that her house has not getting water supply for the last two months.

“Every morning we take an auto rickshaw to Chandulal Baradari filter, a kilometer away, and bring water in containers. How long do the authorities expect us to do this?” she asked.

AIMIM legislator from Bahadurpur, Mohd Moazam Khan said that the locals have never informed him about any such problem. “However, as I have come to know about it now, I will take up the issue with the General Manager HMWS&SB immediately” he said when the issue was brought to his notice.

Meanwhile, Mohd Khader Mohiuddin, Deputy General Manager, HMWS&SB Chandulal Baradari, admitted to the problem. “The pipelines are very old and have to be replaced. We will take up the work when we are accorded permission by our bosses,” he said.

Expressing concern over lack of basic amenities in these areas, the residents of of these areas say they are being ignored. “Just before the elections, local leaders rush to these areas seeking our votes, after the elections they disappear, as if they have nothing to do with these localities,“ rued Mohd Khadeer, resident of Fatima Nagar.

“Demanding better civic amenities, the matter was brought to the notice of local leaders and authorities concerned, but no initiatives were taken to solve these long-pending problems. Thus, after the polls, nobody is in a mood to listen to our pleas,”Another resident Mohd Ghouseuddin said. Residents and commuters are angry over uneven roads in Fatima nagar area. They complain that the work done to repair roads is shoddy and new roads get destroyed within a couple of weeks after being repaired.

“I am used to visiting Fatima Nagar since 1993, but nothing new has happened in that locality,” said Mohammed Azeem Rahman, resident of Jahnuma. He added that problems of water supply, cleanliness and sanitation are intensifying in Fatima Nagar with each passing day.

The dwellers of these localities have been waiting for development works for the past 20 years. Except assurances, no concrete initiatives have been taken to improve the situation.

This constituency have many small areas which still facing the basic issue of drainage and
problem during the heavy rains in 2016 this problem came out as a disaster in those smaller areas which come under Falaknuma, Jahanuma, Hasan Nagar, Nawab Sahab Kunta and the neighboring areas, houses were drowned, waters was entering in the small houses, just because of lack of proper drainage system.

One of the Most disturbing and active problem of the constituency is TRAFFIC. Area which connects NH-44 Faces Traffic comes from the new city to the airport and more public destinations in the area, which creates many problems (specially in the rains) for the locals in hours of traffic. Even before the elections of 2014 these problems was a issue and then the maste rplan for the road winding has made to finish the problem.

Areas which connects Charminar like in the old city Jahanuma, Fateh Darwaza and Doodh Bowli, Shamsheer Gunj and Kalapather have the smallest and conjusted roads with huge number of daily traffic heading towards Charminar.

The process of master planning of the roads which was made even before the previous elections are still going slow.In 4.5 years there is only 20% road winding has completed and the issue is still persists.

However, the increasing traffic issue has taken up, last year MLA demanded a Flyover starting from Bahadurpura police station to Aaramghar which can be helpful in the division of the traffic passes through Zoo park, Bahadurpura X road etc. And the proposal has been accepted by the GHMC and stone has also been laid on 20 june 2018 with the representation of Hyderabad MP Asaduddin Owaisi by IT minister KTR.

In this big constituencies where there is a population of 2.5 lakh people there has to be more development works. Apart from issues there are several issues like there is a need of Major government hospital, Govt high school with more resources, daily water supply, delay in the payments of shaadi mubarak and several govt schemes and specially the smooth public transport facility in the small old city areas.

Just before the Elections sudden announcement has been started and also the inauguration programes of the roads but Why just before the elections?,last time MLA Maozam khan’s extraordinary victory has made him more confident and he might be thinking of that this time also it will be like walk on a cake for him, but this is in the hands of the voters re-elect him for the third term or not.

Before casting your votes remember these issues and address it to the candidate and see he is eligible to do or not.#KhabarLive