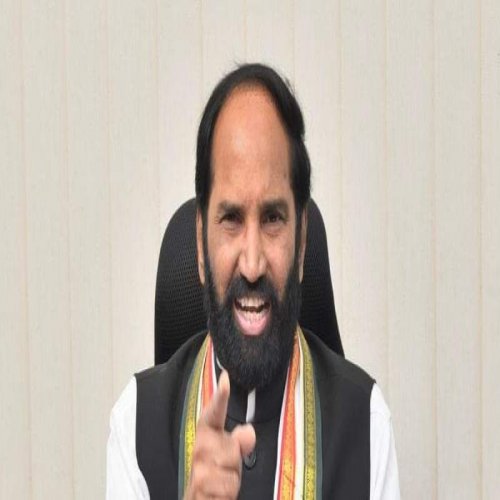 The long-cherished dream of statehood for Telangana was realised under the UPA-II regime headed by the Congress in 2014. Even as many leaders have defected and others are demanding a change in leadership, N. Uttam Kumar Reddy says the party has not been weakened.

Despite making the formation of the state possible, the Grand Old Party’s stature has fallen in the state, where it has not been able to come into power. Much of its failure has been attributed to weak state leadership, internal rumblings, a wave of defections, and above all, its failure to limit the perception that the ruling party leader K.Chandrasekhar Rao was the sole crusader for the cause of Telangana.

With some backward caste and Dalit leaders demanding leadership roles, the N. Uttam Kumar Reddy-led Telangana Pradesh Congress Committee (TPCC) faces yet another rebellion within its ranks. The implosion has come at a time when the Bharatiya Janata Party has emerged as a strong bidder to occupy the primary opposition’s role. The saffron party performed unprecedentedly well in the last parliamentary elections, not only winning four of the state’s 17 seats but also improving its vote share significantly.

The Congress, in contrast, won only three parliamentary seats and has seen a massive dip in its strength in the assembly. From 21 seats in 2014, its numbers have come down to six in the current assembly.

In an informal meeting, #KhabarLive spoke to Uttam Kumar Reddy regarding the various problems the party has had to face and how he plans to avoid further losses and rumours of internal dissent. He put up a brave face and claimed that the Congress will win the next assembly elections, which are scheduled to be held in 2023, despite all odds.

ALSO READ:  Winning The GHMC 'Mayor Post' For TRS Will Become A Herculean Task Or 'Just A Cake Walk' ?

The Congress played a huge role in granting statehood to Telangana. How did KCR and his party steal the show and where did the Congress go wrong?

We failed to counter the manipulations of KCR. People believed his fancy promises. Also, anti-incumbency generated against the Congress rule (at the Centre) was the reason for the party’s defeat in Telangana.

Is there any future at all for the Congress in Telangana?

Why not. We have a bright future and we will certainly win the next state election, due in 2023. The general mood of the people in the state is against KCR’s rule due to his failure to keep his promises.

If a series of electoral reverses and massive defections are any indication, you as the TPCC chief seem to be presiding over the Congress’s downfall. Is it not so?

No, not at all. Don’t go by local body elections and by-elections. Any ruling party will obviously have its way in such elections with money power, distribution of liquor and misuse of police. Such tricks will not work in the general and state elections.

Blame the lawmakers who sold themselves and subverted the will of the people. Also, blame the people [the Telangana Rashtra Samithi] who bought them with a price ranging up to Rs 20-25 crore. It’s not fair to blame the people who are practising decent politics. No defection will hurt the Congress in Telangana. Enough fresh blood is coming into our party and departing turncoats are a good riddance.

As the head of the PCC, should you not take part of the blame for failing to infuse confidence in the party ranks and prevent defections?

Defections are not about leadership failure. They are related to commercialisation of politics, perpetrated by the people in power.

Some party leaders have alleged that people who do not have a popular base are getting the party’s top posts with the blessings of the top brass in Delhi. Are such people not to blame for the party’s poor prospects?

Show me, who are they? Take me for instance. I continue to witness an unending streak of poll successes since I joined the party. I was an MLA for four times, after which I am now an elected member of parliament.

There is talk of Uttam-KCR nexus, even within your own party. Is it true?

It is rubbish. The party under my leadership is fighting the TRS government tooth and nail. We have been exposing corruption in the KCR government in the assembly and the legislative council and in every democratic platform.

Rival groups in your party have launched a campaign to seek your removal as TPCC president. Do you want to still continue?

The term of a PCC president is three years. But I have been holding it for the last five years. Recently, I submitted my resignation to the party high command after the defeat of my wife Padmavati in the by-election in Huzur Nagar. But the party top brass asked me to continue in the post.

So, are you hopeful of getting reappointed as the PCC president again?

No. I think someone else will be appointed in my place soon.

Do the internal squabbles not spoil the party’s chances of winning in Telangana?

After all, the Congress is a national party endowed with the virtue of internal democracy. If anyone in our party has any grievance against me and finds an outlet in our national leadership, I welcome it. We are a democratic party not an autocratic party like KCR’s TRS.

Do you think that you are the right choice for the CM post?

It is an issue to be decided by the party’s national leadership. Also, it is not the right time to talk about who is the CM candidate, as more than two years are left before the next election is held.

Is there any prospect of a CM face being projected in Telangana before the elections?

Generally, there is no such practice in the Congress. The party high command will take a call after the election results, in consultation with the Congress Legislature Party and we will abide by it. It is not that our party has a dearth of leaders. We have got more than half a dozen leaders who are chief minister material.

There is a clamour within your party for social justice. How do you respond?

Congress has a history of doing social justice. Damodaram Sanjivaiah was the first Dalit chief minister of Andhra state, who championed the cause of social justice, and we will continue with that tradition. Our party’s top leadership will decide on ensuring that the idea of social justice is infused into the party’s organisational structure. All castes and subaltern sections must be taken on board in the course of an organisational revamp. #KhabarLive #hydnews