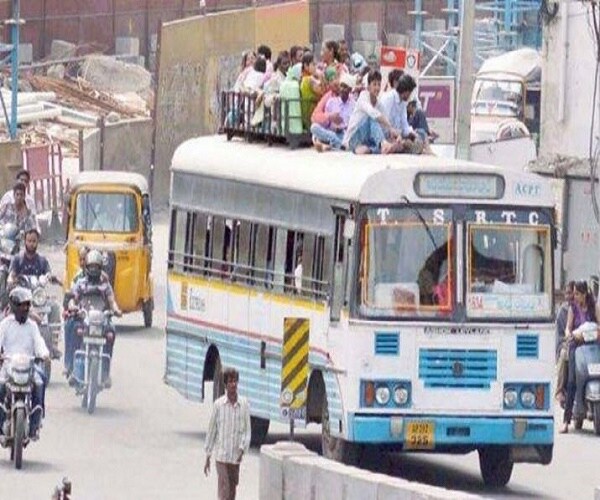 The tussle between KCR government and RTC striking employees is deepens after a six days protests.No end appears in sight for the indefinite strike by the employees of the Telangana State Road Transport Corporation (TSRTC), which continued for a sixth straight day.

The Joint Action Committee (JAC), spearheading the strike by over 48,000 employees, made it clear that they will not resume their duties till the government accepts their major demands, even as Transport Minister P. Ajay claimed that the strike is not having much impact on bus services.

The TSRTC continued operating bus services in Hyderabad and other parts of the state with the help of temporary drivers and other staff.

JAC leader Ashwathama Reddy announced after a meeting with leaders of various political parties and mass organisations that the strike would continue. He asked the employees not get scared by the government’s threats.

On Chief Minister K. Chandrasekhar Rao’s statement that only 1,200 employees who joined duties before the expiry of the deadline set by the government remained in the TSRTC, Reddy said no employee has received a dismissal order. “If we are served the orders, we will challenge the same in the court of law,” he said.

Meanwhile, the Telangana High Court asked the unions of striking employees to file a counter-affidavit on the strike before October 15. The court adjourned the hearing on a petition, seeking the court’s direction to the government and the unions to resolve the problem so that the common man was not inconvenienced.

The government, in its affidavit, informed the court that it has made alternate arrangements to ensure that general public does not face any hardships due to the strike.

TSRTC incharge Managing Director Sunil Sharma conveyed to the court in his report that 8,150 vehicles were being operated. These include 3,013 RTC buses, 1,804 hired buses and 2,637 maxi cabs.

Meanwhile, striking employees continued protests across the state. Tension prevailed in Warangal town when police arrested the protesting workers. The protestors condemned what they called high-handed approach by the police.

ALSO READ:  Now, Ladies & Gentlemen, Presenting, Our Own - The ‘Made In India’ Bitcoin 'Lakshmi'

In another related development, a delegation of Bharatiya Janata Party (BJP) leaders called on Governor Tamilisai Soundararajan to complain against the Telangana Rashtra Samithi (TRS) government for adopting anti-employees policies in dealing with RTC strike.

State BJP chief K. Laxman said if 50,000 employees were sacked, his party would not keep quiet. He alleged that government’s treatment of the RTC employees is inhuman as it has not paid them salaries for the month of September and also stopped medical services for them. #KhabarLive