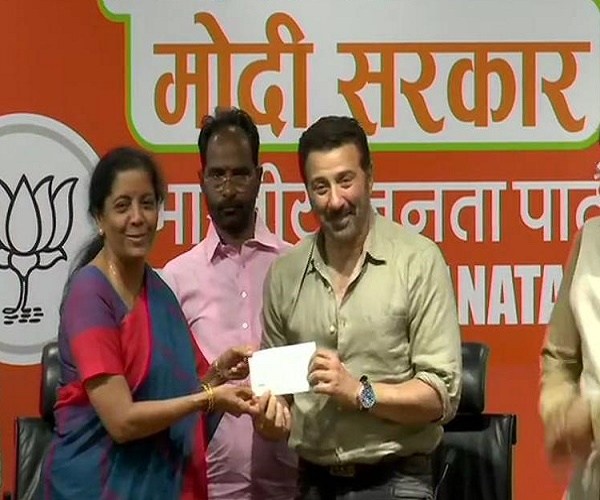 The BJP appears to have got a booster dose – a ‘dhhai kilo ka haath’, to be precise – in Punjab by roping in Sunny Deol in the poll season. The popular 62-year-old Bollywood actor is likely to be fielded from the prestigious Gurdaspur seat, which was won by a fellow actor, the late Vinod Khanna in 2014.

Sunny, eldest son of actor Dharmendra, has had a massive fan-following in the north over the years, very much like his father, a native of Sahnewal village in Ludhiana district whose rise to stardom is part of folklore in Punjab now. The BJP apparently hopes that Sunny’s popularity and his on-screen image of a nationalistic hero, built largely because of his hyper-nationalistic movies like Border (1997) and Gadar Ek Prem Katha (2001), will help woo the electorate in the northern state. But will it really be a smooth sail for Sunny in politics, a slippery terrain where the best of matinee idols, not excluding his dad, have struggled to find a foothold?

In 2004, Dharmendra had won the Lok Sabha election from Bikaner in Rajasthan on the BJP ticket but it was clear from the very beginning that he was not cut out for politics. After a laborious first term as an MP when he was often accused of rarely visiting his constituency, he quietly retreated into his comfort zone of the film industry, spending most of his time in growing organic vegetables, tending to his cattle at his salubrious farm house in Lonavla.

ALSO READ:  Bollywood Actor Emraan Hashmi On Being A Successful Actor, Why He Wants To Start Afresh?

In comparison, Dharmendra’s wife Hema Malini fared better. After her one-term in Rajya Sabha, she won her maiden Lok Sabha election from Mathura five years ago and is again in the fray on the BJP ticket from the same constituency.

Time will tell whether Sunny manages to make an impact in politics or ends up being yet another glamorous prop used by the political parties in the thick of election season. Many south Indian film stars, from MGR and NTR to Jayalalitha have proved their mettle in the rough and tumble of politics but a majority of their Bollywood counterparts such as Amitabh Bachchan have failed either due to controversies and lack of time and commitment or for that matter sheer disinterest.

Even a relatively younger actor like Govinda found the goings tough after winning a parliamentary election in 2004. Even in 2019, BJP MP Paresh Rawal, a staunch supporter of Narendra Modi, opted out of the ongoing elections saying he was finding it tough to devote enough time to his constituency in Gujarat.

It was only a few exceptions such as Sunil Dutt and Shatrughan Sinha and to some extent Vinod Khanna, who could juggle their twin roles with ease. Shatrughan, a four-term BJP MP (two terms each in the Rajya Sabha and the Lok Sabha), is now contesting on the Congress ticket from his home constituency of Patna Sahib in Bihar where he is pitted against Union minister Ravi Shankar Prasad of the BJP. In this election, the Congress has also fielded actress Urmila Matondkar from the Mumbai North seat.

Still, Sunny may well be the unlikeliest of the film stars who have taken a plunge in politics. Contrary to his macho screen image, he is a soft-spoken and shy man in real life, someone who has steered clear of any kind of politics in the film industry, which remains perennially divided into different camps. Even after making his debut in Betaab (1983) more than 35 years ago, he still keeps to himself and does not belong to any camp. A man of few words, he is rarely seen in filmy parties and hardly socialises in or outside Bollywood’s charmed circles.

ALSO READ:  Is 'Cock Fighting' Ban Or No Ban In Andhra Pradesh Game Of Blood Sport During Sankranti Festival?

In short, he does not appear to be an actor who will take to politics like a duck to water and wear his stardom on his sleeves to deliver a blockbuster in politics. As he said while joining the BJP in Delhi on Tuesday, he would like to let his work do all the talking.

It will be interesting to see if Sunny, who wants Narendra Modi to return to power, gets the opportunities to serve people or simply wilts under the pressures like many of his predecessors from the tinsel town. In politics, he will have to patiently wait for taarikh after taarikh to get things done. Uprooting a hand pump will not do!#KhabarLive