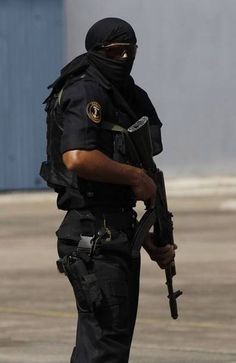 Armed with Heckler and Koch MP-5 sub machine guns, Berreta assault rifles, Glock pistols, corner-shot guns and enhanced ‘buster’ tools, a group of ‘black cats’ started room-to-room intervention to ‘eliminate’ the enemy holed up in a building in Hyderabad. Communicating in tactical sign language, the ‘hit’ team reaches close to the room where militants are hiding.

Door-busting explosive charge is used to blow up the locked door and then begins a heavy exchange of fire. Commandos use corner-shot guns to attack the armed terrorist without exposing themselves. Mission accomplished! Well, this was not a real mission but just a part of the gruelling training session that black cats undergo everyday.

But, what if such a situation was to arise in Hyderabad or any other South Indian State? Soon, black cats or the heavily trained commandos of the elite National Security Guards (NSG) will be available just a few minutes away, and round-the-clock. After several years of wait, the state-of-the-art Special Composite Group (SCG) complex of the NSG — which is on par with the NSG training facility in Manesar, Haryana, in terms of training and facilities — is ready to be occupied by the special forces. Union Home Minister Rajnath Singh will inaugurate the facility, set up at a cost of `250 cr in Ibrahimpatnam, on April 10.

What more, the NSG is also acquiring its own special aircraft, which will be stationed in Hyderabad, to transport the commandos to any state at a short notice! Sources disclosed to Express that state of the art facilities are in place for training of the commandos at the new facility in Hyderabad —both the Special Action Group which is the main strike wing and the Special Ranger Group (SRG) who are deployed to guard high-risk VVIPs in the country.

“Our training is on par with any other special forces in the world. We have several new training modules, scenarios and the required paraphernalia. We have dummy buildings, installations to carry out mock drills. This facility, spread over 200 acres, is on par with Manesar (NSG training facility),” sources said. While members of the SAG are drawn exclusively from the army, those in the SRG come from the para-military forces.

Sources say that with the Ministry of Home Affairs (MHA) mulling a proposal to sanction the NSG to take part in anti-militancy operations in Jammu and Kashmir on a regular basis, the training for these commandos will be given at both Manesar and Hyderabad centres.

“All NSG units spread across the country, will now be trained at Hyderabad as well. Besides Kashmir, there is a proposal to prepare NSG commandos for insurgencies in other parts of the country as well. So far, NSG was being used in very limited operations in Kashmir. Besides, if there is some situation in Hyderabad which demands NSG deployment, we can arrive at the site within minutes.’’