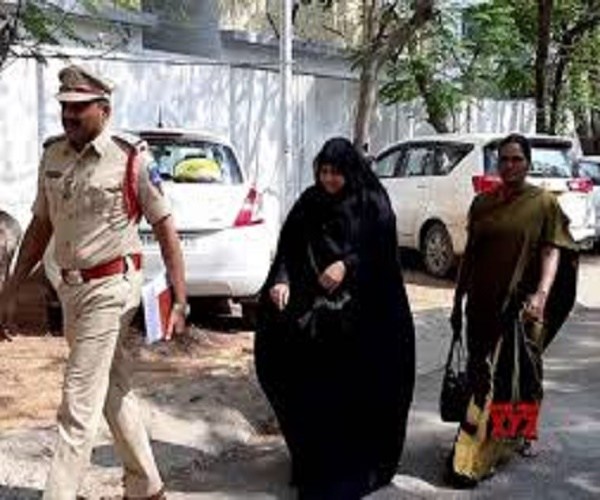 In a dramatic move, the Enforcement Directorate (ED) has now all set  to attach Heera Group and Nowhera Shaik‘s all properties in India worth 2000 crores. The ED has filed a petition in the court seeking custody of Nowhera Shaik, managing director of the Heera Group of Companies, who is accused of running a Ponzi-like scam by attracting huge deposits, which investigators say is to the tune of Rs 5,700 crore, from nearly two lakh people.

The move by the ED comes even as the Telangana state police is mulling handing over the case to the CBI as it is being investigated by the police of various states. The case also has overseas links. Sources told #KhabarLive that the ED will be filing a petition seeking Nowhera Shaik’s custody at least for five days to interrogate her on the money laundering angle.

Besides, the ED will also look into foreign exchange rules violation on the part of Nowhera Shaik’s Heera Group, which has operations in the UAE as well.

Though she has been interrogated quite a few times, Nowhera Shaik has not spoken a word about her deals before the investigators. It remains to be seen whether she would reveal anything before the ED. Just like in the case of Musaddilal Jewellers, the ED is likely to initiate proceedings to attach her properties under the Prevention of Money Laundering Act.

Investigation so far has revealed that Shaik has several properties in Hyderabad, Chittoor district of Andhra Pradesh, Mumbai, Pune, Delhi and Bengaluru. It is suspected that she has properties abroad as well. Her properties at Banjara Hills and Tolichowki in Hyderabad and Chittoor are said to be worth about Rs 150 crore.

Sources said that the ED is preparing a detailed questionnaire to get some information out of the alleged scamster and confront her with inputs which they have gathered from their sources.

Investigators say Shaik has about 200 bank accounts through which she was reportedly carrying out deals. The turnover of her company in 2017-18 stood at about Rs 900 crore and in her business ventures she was making a profit of 90 per cent. Besides, there were foreign currency deposits to the tune of Rs 250 crore in her accounts.

On the other hand, the Telangana police are waiting for response from the State government over attaching 81 properties worth Rs 213 crores (market value) belonging to Heera Group of Companies founder Nowhera Shaik, who was arrested for duping gullible people in the name of Ponzi scheme. In the open market, the properties are estimated to be worth more than Rs 1,000 crores.

The Detective Department (DD) sleuths, who are investigating the case, have already sent proposals to the State government for attachment of properties under Section 3 of Telangana Protection of Depositors of Financial Establishments Act-1999 to safe guard the interest of depositors.

“Once the government issues the order asking us to attach the properties, we will complete the process at the earliest,” an official privy to the case said. The 81 properties pertained to Nowhera Shaik and her companies’ directors are spread dotted around in Telangana, Andhra Pradesh, Delhi, Maharashtra, Kerala and Karnataka. A detailed list containing the properties was sent to the Home Department.

Nowhera Shaik and her companies and directors owned high-valued properties in Banjara Hills and Tolichowki in Hyderabad, a few commercial complexes in Mumbai and a hotel in Kerala.

According to the official, either State government can issue a government order (GO) to attach the properties under Section 3 of Telangana Protection of Depositors of Financial Establishments Act-1999 or the Enforcement Directorate (ED) under Prevention of Money Laundering Act (PMLA).

“We have also submitted the case details to ED for its perusal. The ED might anytime attach the properties of Nowhera Shaik and others,” the official added. He said more than 240 bank accounts related to Nowhera Shaik and her companies and directors have been identified across India.Rs 1,000-cr properties of Heera group to be attached

On verification, only Rs 25 crore was found in the bank accounts and the same was frozen under Section 102 of Criminal Procedure Code (CrPc). This apart, several foreign bank accounts of Nowhera Shaik were also found during the investigation.

Investigators found Nowhera Shaik established 15 companies under Heera Group. Of them, some were shell companies. #KhabarLive