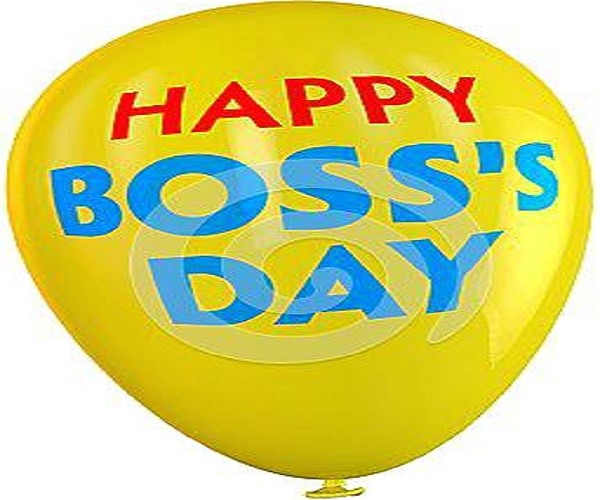 For some of us this person may mean a lot, while for some this person is just an object of contempt or a butt of ridicule. In other words, we can love or hate this person, but cannot ignore. Yes,you guessed it right. ‘It’s none other than our boss at home and the boss at our work place.

First, let us talk about the boss at our work place on this National Boss’s Day. The omnipresent and omnipotent person. In the wake of fusillade of #Metoo revelations across the globe, the role of the boss in one’s life and career has come once again into sharp focus. Though this person has to play apparently just one role of overseeing our work, his job acquires many hues and shades by the way he conducts himself or herself. In other words, we see this person from three different angles-the boss as you see him or her, the boss as others see this person and the boss as he sees himself.

The word ‘boss’ is more than a century old Dutch word which means ‘Master’. It at once evokes awe and abhorrence in us for the word has not lost yet the ‘master-slave’ aura if not the halo around it. The boss as you or others see him is traditionally a person of some striking and distinctive style and manners. He is strict, tough, hard to crack, egoistic, selfish. For some he is ambitious, sadistic, thick-skinned, hell-bent, For others he is a man of many isms- regionalism, nepotism, favouritism, and casteism.

My son is a software engineer in Pune. When he was working in Bengaluru in a different company, his boss belonged to a south Indian state and therefore preferred to fill most key positions in the company with persons from his state and that too with persons from his community! For him, experience, academic qualifications, and work track records were next only to his favourite ‘isms’!This attitude is not peculiar to him only and most Indian bosses unashamedly show these traits in the public. This is the element that often sows the seeds of abhorrence in the employees. Again, most of us cannot choose our boss at work and strongly long to have an ideal boss.

He is a person known for virtues like understanding, considerate, communicative,appreciative, open, fair, and above all humane. A person with these qualities can surely turn a bad job into an enjoyable one. Fortunately, there are many such Bosses these days around us if only we look things from his perspective.

Late Telugu film Producer and Director Rajendra Prasad was one such Boss. It is said that during shootings, he used to treat both big actors and production staff alike, give same food to all and he often ate with light boys and clap boys. Not only that, he produced one film and all the profits from that movie were distributed among the production staff with which some of them purchased houses, while some performed the marriages of their children!

Unfortunately, the entire film industry is caught in the storm of #Metoo allegations, thanks to many ‘Bad Bosses’ not only in the industry but almost in every sphere of human activity! This National Bosses’ Day is the right occasion to discuss the pertinent issue out and out and come up with a viable and practical safety system for women.

Now the Boss at home. When a man is the Boss, he often behaves more or less like a Boss at our work place. He always wants his dicta to prevail and expects all others to fall in line. Though he may not suffer from any isms here, the Boss at home often gets his power from his traditional social position and sometimes from his bulged wallet. If he is a Dharma Raj, others in the family suffer the fate of Pandavas.

When a woman is the Boss at home, she often succeeds in wielding all power and ensuring the well-being of all other members. If she is a Lady Macbeth, others in the family also meet the fate of Macbeth.

Interestingly, the methods and techniques to win over the Boss both at work and at home are more or less the same. Follow the “4Ps”.

– Please them with our work, dedication, and honesty.
– Praise them sincerely and unconditionally.
– Pacify them by doing the things they like most
– Pamper them with gifts and trinkets.

By the by, at home, I am the Boss. Of course, I have the permission of my wife to say so! #KhabarLive