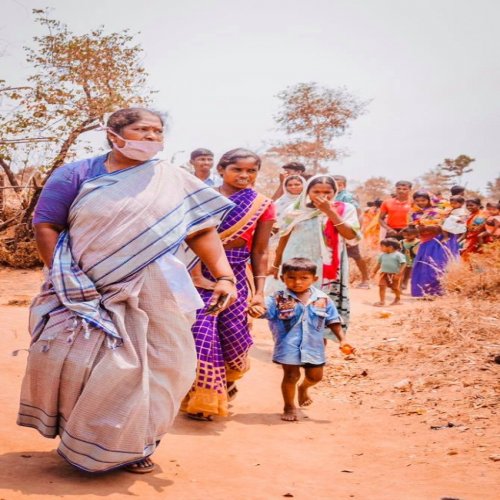 Tractors and bullock carts loaded with essential items have been journeying through the tribal interiors of Mulugu in Telangana. Leading the efforts to ensure that villages under her constituency get adequate stock of groceries and vegetables during the nationwide lockdown is Mulugu MLA Danasari Anasuya, better known as Seethakka.

Seethakka’s team loads groceries and vegetables either onto tractors or on bullock carts everyday and sets off to supply villages, with the MLA following in her vehicle. And although reaching out to people in remote parts of the state is no easy task, Seethakka is familiar with the villages and the routes even through dense forests. Having joined the naxal movement at an early age, Seethakka surrendered in 2004 before joining the political arena.

If the terrain doesn’t allow her vehicle to pass, the 48-year-old Congress MLA, goes on foot or travels by bullock cart or tractor to ensure that the essentials are delivered.

Since the lockdown was imposed on March 25, Seethakka, who is a well-known politician, has been on a whirlwind tour of her Mulugu constituency. The two-time Adivasi MLA has so far reached out to people in over 100 Adivasi hamlets including in Eturunagaram, Tadwai, Mulugu and Govindaraopet mandals. Her team has covered those in the plains and tribals in the forests, distributing essentials such as rice, vegetables, sanitisers, soaps and masks, she says. These items have been collected with the help of donors and good samaritans.

Speaking to #KhabarLive from Mulugu, Seethakka alleged that the TRS government is not paying heed to the poor who are the worst affected due to the COVID-19 lockdown. “As we see people sincerely adhering to the lockdown, the poor who cannot survive without daily wage are the worst hit. The government announced Rs 1500 but this has not been given to all as many of them don’t have ration cards.”

On the occasion of Ambedkar Jayanti, Seethakka urged the government to address the issues of the poor who are affected due to lockdown.

Arguing that the cash assistance of Rs 1500 to tide over the lockdown isn’t sufficient, the MLA said, “After the order by both the Centre and the state governments, people are sitting at home without going to work. It’s the responsibility of the government to address their hardships. As Rs 1500 is not enough, the government should immediately provide Rs 5000 to each family.”

She also said that a mere 12 kgs of rice is not enough and people require other nourishment to increase their immunity during the COVID-19 pandemic.

Seethakka said that the Adivasis in the interiors are often unaware of what is happening outside and the lockdown came as a shocker. She said, “They only knew that there is some disease and should not step out. People who have some rice are surviving with rice jawa (gruel).”

The MLA would at times go by foot in areas that don’t have proper road connectivity, crossing lakes and other water bodies. Once at the villages, Seethakka explains to people the public health emergency at hand, and the need to maintain social distance and personal hygiene.

Narrating the reactions to the COVID-19 pandemic, Seethakka said, “People, especially Adivasis are scared as two positive cases were reported from the area, we are trying to educate them about it by explaining. I hope my visits to their places can certainly instill confidence to overcome this tough time.”

Seethakka was one of the first legislators in the Telangana Assembly to raise the issue of shortage of masks to tackle the coronavirus in the Assembly. At the time, she said that there weren’t enough masks for everyone and also raised the issue of stores overpricing the products, asking the government to take note of the issue.

However, she said that she was ‘humiliated’ as Chief Minister K Chandrasekhar Rao had downplayed the issue, saying, “We are all sitting here and none of us have masks. Will we die?”

The Telangana government has since made wearing masks in public places compulsory and KCR himself was seen wearing a mask while meeting with officials recently. #KhabarLive