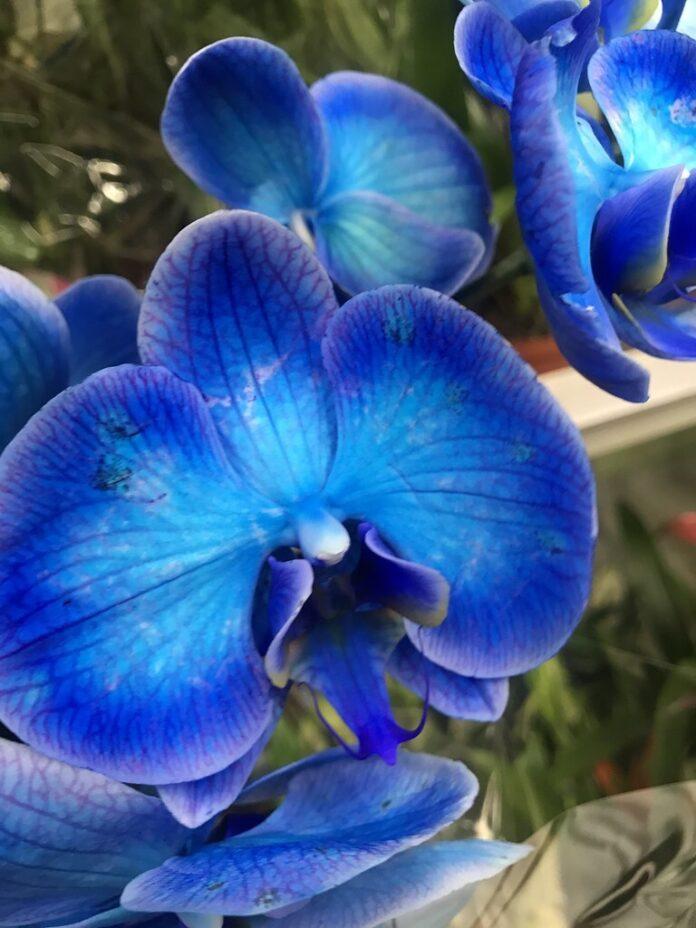 Orchids, most noticed for their ornamental and medicinal value, now face the greatest threat of mass extinction in the plant world. The blue orchids (Vanda coerulea), also known as the autumn lady’s tresses, are as exotic to look at as their name sounds. The large, flat, vivid blue and long-lasting flowers are greatly prized among growers and have been extensively used to produce deep blue and purple hybrids.

In the wild, these orchids grow on exposed deciduous trees — primarily oak — at elevations of 900-1500 m and have been recorded from Assam, Arunachal Pradesh, Meghalaya, and Nagaland.

They were, in fact, first collected from the Khasi Hills of Assam by British collectors in the 1930s, so fascinated by the flower’s appeal that they took many samples to England.

Unfortunately, the unfamiliar climate did not suit the fragile plant and all the samplings died in the foreign land. The species would have been lost forever if not for the discovery of another wild habitat in Arunachal Pradesh, from where they were recovered.

The truth is, what make orchids these extraordinarily beautiful family of flowers is not dependent on their genetic composition alone but also a number of factors like the niche habitat they grow in, and the fungal organisms or insects they associate with.

This not only makes them extremely difficult to cultivate in gardens, homes or nurseries, it also threatens their very survival if over-collected from the wild.

So the orchids, while popular for their ornamental and medicinal use all around the world, and known for their long-lasting nature in floral decors, are in reality vanishing, with their diversity diminishing each year.

They face the greatest threat of mass extinction in the plant world.

As per the International Union for Conservation of Nature (IUCN), orchids are found in bodybuilding supplements, sold in the US and Europe. The stems and tubers of 94 species are used in Chinese and South Asian traditional medicines.

A number of orchid plants are edible and are used in traditional foods such as chikanda cakes in Central and East Africa, and salep, for hot drinks and ice cream in Turkey. Vanilla is one of the best-known flavours of orchid.

There are over 30,000 known orchid species in the world, with each one finding use in some man-made product. And, while the illegal trade in tigers, elephant tusks and rhino horns are still visible, the IUCN recognises the fragile, ethereal orchids as among the most traded wildlife in the world.

These flowers make up more than 70 per cent of all species listed in the international trade regulation group CITES.

In India too the love for orchids has been recorded since the Vedic period. In the Rig Veda and the Atharva Veda, two orchids — Rasna (Vanda tessellata) and Sanjeevani (Flickingeria macrai) — have been mentioned as medicinally important.

Sushruta Samhita and Charaka Samhita listed about a dozen orchid plants used in Ayurveda like the jeevanti (Flickingeria macraei) and the munjatak (Orchis latifolia).

Traditional indigenous knowledge of orchids though unrecorded has been passed on from one generation to the other since time immemorial.

Orchids have a cultural and religious significance, too, like the fox-tail orchid (Rhynchostylis retusa), popularly known as kopoh phool traditionally worn by women dancers during the Bihu festival.

According to A N Rao, retired director of the Centre for Orchid Gene Conservation of Eastern Himalayan Region, India has 1,350 species of orchids, 960 of which are found in the Northeast and the rest from the Western Ghats.

In 2019, Rao was credited for discovering 35 orchid species from the Northeast, making it to the record book for the maximum number discovered by a single individual in the country.

He feels orchids could hold the answer to many of our modern medicinal challenges like the cure for AIDS. He also thinks discoveries such as his recognise the importance and thus help protect the habitat from anthropogenic pressures.

Unfortunately, a number of studies prove that many orchids have already faded into history even when they were just discovered.

Paphiopedilum canhii, an orchid discovered in Vietnam recently, caused such a stir among collectors that within a year, 90% of the species was eradicated from its wild habitat. A recent research published in the International Journal of Ecology and Environmental Sciences revealed that Bangladesh has lost 32 species of orchids in the last 100 years. This is 17% of the nation’s orchid diversity.

There is another imminent threat to orchids. It is likely that these plants, more than any other plant family, will be in the front-line of species to suffer large-scale extinction events as a result of climate change.

Therefore, conservation through reserves alone is now considered unlikely to achieve protection of these fragile species. They will need artificial assistance to migrate from hostile environments, across ecological barriers like alienated lands such as farmlands and built infrastructure to new climatically buffered sites.

They will also need a greater understanding of the interlinked dynamics each species shares with its surrounding, from the micro-orgasmic fungi to the limestone rocks or tree trunks they cling to. Securing entire habitats is intrinsic to ensuring that these beauties last. #KhabarLive