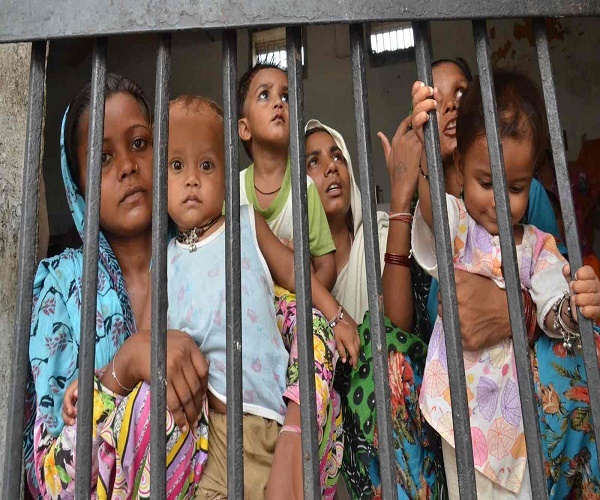 Ravi is a 12 year-old-boy who lives in a Santoshnagar colony in Hyderabad and studies in Class VIII in a government school. He is mischievous and often skips school, like a lot of other children in his class. His mother works in a factory, earning Rs 7,000 a month to make ends meet. What sets Ravi apart from other children is that his father is serving a life sentence and is currently housed in a central prison in Chanchalguda in Hyderabad.

Once, when Ravi was pushed by another student in a queue and he pushed back, he was taunted by the mother of the other child with the remark, “Jaise baap gunda wese hi beta gunda.” (The son is also a criminal like his father.)

Children like Ravi, ‘orphans of justice’, could be assumed to form a tiny portion of the population. The truth is the opposite. Official statistics are available about children of incarcerated mothers who are still living with them in the prison. But we estimate that as many as 8,70,948 children are affected by parental incarceration (this figure does not account for or remove the double-count that would be produced by dual parent incarceration).

For no fault of their own, they are stigmatised every day, subjected to offensive remarks and to the expectation that they will grow up to be criminals too.

In our ongoing study #KhabarLive conducted in-depth interviews across forty families, with caregivers and children between 6 and 18 years old in Hyderabad. Among these families, the mother or father or both had been convicted of an offence and were then serving a prison sentence of at least two years.

A weight too heavy to carry
The stigma that surrounds parental incarceration isolates children from many sources of support by forcing them into silence. They are not allowed to openly mourn their prolonged parental separation. Talking about their association with the incarcerated parent can invite more censure and isolation instead of support.

Families, attempting to protect children, often tell them to keep parental incarceration a secret; or children impose this silence on themselves due to internalised stigma. The incarceration of a parent becomes a shameful secret, which invokes great fear in their minds and is a source of constant worry. The fear of being discriminated against becomes as potent as the trauma of actual experiences of discrimination.

In an effort to hide their parents’ incarceration, children come up with various lies or excuses to explain parental absence, including illness or out-station postings. These are attempts at self-preservation in a world that casts them as prospective delinquents. As a result, few people in their lives are actually aware of their emotional state.

The pressure to hide the whereabouts of their parents can restrict the social development of these children by limiting their social interactions. They may avoid attending gatherings, like birthday and wedding celebrations, out of fear of intrusive questioning or discriminatory treatment.

The school however does not offer protection from such intimidation. Diya, a Class IV student recalled being asked by her teacher, “Tumhari mummy ko kaise maara papa ne, to main bolti thi ki ‘Mujhe pata hi nahi‘” (How did your father kill your mother?).

Diya could only respond, “I don’t know.”

No space to share
While experiencing discrimination in the public sphere, children often have no space to share their distress and suffer in solitude. Families usually do not share incarceration-related information with children due to their desire to preserve the image of the incarcerated parent. This leads to scant conversation about parental incarceration within homes. Children are left to their own devices to make meaning of parental separation and deal with their grief.

Afraid of causing distress to their families, which are embroiled in the criminal justice system, children keep their pain to themselves. This internal suffering and the pressure to maintain a facade of normalcy takes a toll on emotional health – leaving feelings of helplessness, isolation, anger, and despair.

Azeemuddin, a 15-year-old whose father had been serving a ten-year sentence for sexual assault, was teased by his friends regarding his father’s offense.

“Jaise rape ka ho gaya ye, ye sab ho gaya….Wohi gandi cheezen, issi chakkar mein,” he said (Like making rape related insults, such things….those kind of nasty things they say, that’s all). Azeemuddin has been severely affected by these remarks, but admits to never having shared his pain with his mother. He suffers in solitude. He is trying to prove that he is not a future rapist by being associated with ‘Safer cities’, a project aimed at preventing sexual violence towards women.

The stigma surrounding an incarcerated family member also exacerbates pre-existing familial vulnerabilities. In most cases, families have no role to play in the commission of the alleged offence, yet they suffer. Alongside their grief, they are confronted with sudden, tremendous financial hardships. They require an environment of understanding which is unavailable to them.

Societal stigma stands the risk of pushing families, and their children, over the edge of the cliff. Sensitive conversation and greater acceptance could prevent them from having further impediments in their childhood. #KhabarLive