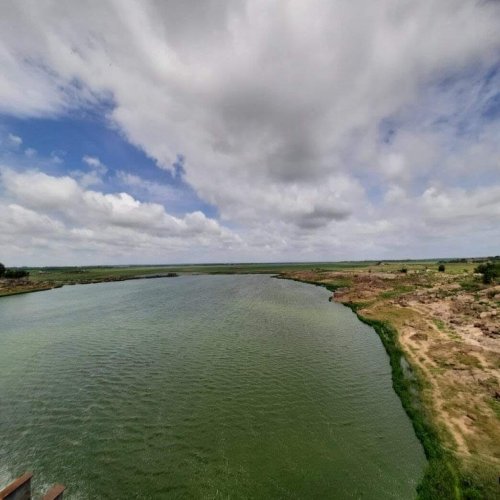 Destruction of hydrological regime in the name of development is leading to the irreversible destruction of Musi River, a deeply rooted identity of Telangana State.

Telangana received good rains in 2020, which by the end of August was a 42 per cent surplus. The State received 830.1 mm of rainfall, against an annual average of 584.2 mm. Among the 33 districts, 14 have registered highly excess rainfall, 10 received excess while 9 had a normal monsoon. Interestingly, not a single district has had deficient rainfall. In 2019, 23 districts had normal rain and only 10 districts received excess rainfall.

Hussain Sagar Lake
The Hussain Sagar Lake, around which Hyderabad is built, was also full forcing authorities to let out additional water. Over 600 buildings downstream were declared vulnerable.

This is a cause of concern. Rainwater flow into River Musi remained low, indicating serious destruction of drainage basin and distortion of catchment.

Musi River
Encroachments and construction of Metro Pillars along the Musi River narrowed the flow of the water if heavy rain and floods may be danger for the people residing along with River.

River Musi is the only river that starts and ends in Telangana State. It has several historical significances. Musi hydrological model was uniquely designed to help farmers and residents of Hyderabad and rural development almost a century back.

Presently, over a period of 30 years, this has been reduced to open sewer drain. However, this contamination originates only in a 20-km stretch, while it is 267 km long-river. Before reaching Hyderabad city, River Musi plays a major role in the hydrology of the region, which was once thick with forests. Ananthagiri hills has a unique distinction of being ridge for 3 major watersheds – one feeds River Musi, another feeds River Manjeera and yet another feeds River Kagna.

Following floods in Hyderabad city in 1908, through design water flows of River Musi were designed to fill two huge lakes, Osman Sagar and Himayat Sagar, and about 25 katwas/ weirs that divert water tanks and kuntas. Thus, about 40,000 hectares of agriculture was assured of water for the entire year. A boon, in a dryland region, 600 ft above sea level Deccan Plateau, this system of rainwater harvesting was destroyed through neglect, short-sightedness, concretisation, urbanisation and modernisation which emphasises development at any costs.

Additional problems of River Musi include pollution, by sewerage and industrial effluents, encroachment, by government and private individuals, and neglect by all the concerned departments. Contamination of River Musi has become so widespread and deep that contaminants have entered human food chain, as crop production is done in the lower reaches of River Musi, largely using sewer and effluent contaminated waters. Ground Water is also severely polluted, in the vicinity. Sewerage Treatment Plants established in Hyderabad city are not working properly, and fully. Treatment of inflows is incomplete, and outlets, of low quality, usually join the existing sewerage stream. Thus, the purpose of treatment, to recycle wastewater, is lost.

In the post-independent India, River Musi was gradually reduced to a channel. Telangana State has completely lost it, with the Chief Minister repeatedly assuring realtors and facilitating real estate development. Master Plans of Hyderabad and nearby towns and municipalities in the Musi River basin are prepared with land as a commodity to be sold, resold and deformed. All development plans, therein, emphasise on changing land use pattern to suit real estate purposes. Hillocks, soil, water bodies, streams and vagus do not matter. Outer Ring Road of Hyderabad, constructed without alluding to the hydrological conditions, has further destroyed the natural water regime.

River Musi, presently, has one third of Telangana population, living off its basin area. This basin has the most intensified industrial development, with more than 50 percent water intensive, effluent generating industries located here. It also received wastewater from River Manjeera basin, through an 18-km pipeline connection. With rapid contamination of local water, depletion of groundwater and import of waste water, Hyderabad has come to depend on water flows through expensive, live irrigation schemes from River Godavari.

As a result, River Musi would be a perennial river, downstream of Hyderabad, albeit with industrial and sewer waters, not pristine rainwater. Upstream of Hyderabad, River Musi has been rendered dead. In fact, the geographical location where it is supposed to originate, a sewer treatment plant (of Vikarabad town) was established.

Features and destruction
Musi (formerly known as Muchukunda) is the only River which starts and ends in the State of Telangana. It starts in Ananthagiri Hills, surrounded by forests, near the feet of Ramalingeshwara Swami temple in Vikarabad. Eesa, a small tributary joins the Musi before entering into Hyderabad. The original catchment area is extensive spreading beyond Parigi, Shahbad and a part of Mahboobnagar, now a part of Vikarabad District.

The River traverses about 250 km and joins Krishna River at Vadapally in Suryapet. It was a lifeline for agriculture and allied activities in hundreds of villages all along the River. People of Hyderabad remember the floods of 1908 and 1971 and the damage it caused. The flood levels are still marked for posterity.

The Nizam constructed two reservoirs in 1920, namely Osman Sagar and Himayat Sagar on the two rivers as a source of drinking water to Hyderabad, under the technical guidance of Sir Mokshagundam Vishveshwaraiah, one of the most venerated engineers in India. In the downstream, through the stretch in the city, a retaining wall was constructed. Within these walls, a number of greenery and conservation patches were maintained to ensure water quality and conservation of river banks. The first sewerage network for Hyderabad, along with a separate storm water drain system, was also established before Independence.

Residential population in River Musi Basin increased in the last 95 years from 5 lakhs to more than 150 lakhs. Such a rise of population has increased pressure on land due to housing, sewerage and industrial effluents, non-availability of sufficient supply of municipal water, vehicular traffic and dust etc. Subsequent State administrations ignored development of long-term vision to ensure sustainable development of the River Musi Basin.

Hundreds of lakes in and around Hyderabad city were used for drinking purposes were not protected by the rulers in the last 60 years. However, in GHMC area or even HMDA area, hardly any lakes are left in which sewerage or industrial effluents are not allowed to flow, and garbage dumped.

Consultancies, surveys, committee reports, even house committee reports are all generated but lakes are either being reclaimed or become sewerage pools. Twin lakes of Osman Sagar and Himayat Sagar are also not spared.

GO.No 111, which prohibits activities that have potential to contaminate the water bodies, is being violated. Even High court strictures were not taken seriously. The Government, the political leadership, the officers, real-estate brokers are all set to make money and break the life line of city that is Musi River.

Osman Sagar, popularly known as Gandipet Lake, has attained 100 years of age in 2020. However, it is dry. In the last few years, rain water inflows into these two lakes have been reducing. This is despite good rains in the catchment area. Rain water is not allowed to enter the twin lakes.

The forests at Anantagiri are depleting very fast. Resorts, Houses, Industries are established. Sewerage Board has stopped drawing water from both the lakes. The city water needs are being met from Krishna and Godavari. The Musi is drying up at and above twin reservoirs and downstream in city and far below up to Wadapally. It is becoming a net receiver of sewerage and industrial effluents. None of the sewerage treatment plants are in working conditions. Even the garbage is dumped into the River. Villagers at Wadapalli 200 km far from city cannot use Musi water for drinking or other purposes without risking their health.

Presently, the River bed has shrunk resembling a small nala of about 20 feet width, almost throughout the length in city. The canal constructed under the Nandanavanam Project in 2000-01 is in itself a proof of the vision and the motive of the then government. On both the banks of the River hundreds of trucks are dumping loads of debris and garbage. This reclaimed land is being converted into various commercial and housing properties. Numerous slums have also come up all along the River.

In fact, government has led the illegal efforts to reclaim Musi River land. State Government constructed a bus station (MGBS) on 30-acre island created by dumping earth and debris by MCH and APSRTC during 1990 and later in 2000s in violation of Environmental Act. In 2017, a Metro Railway station further encroached river bed abutting this island, with impunity and without proper clearances.

River Basin Approach
A River Basin approach has to be adopted from Vikarabad to Wadapalli in Nalgonda district. A major problem with urban governance in Hyderabad is lack of coordination among various government agencies. Earlier, government wanted to convert wide Musi into a narrow channel and had failed.

Musi can be restored only when there is a comprehensive view of the river, for the entire stretch. In Hyderabad, pollution of River Musi can be avoided by building a system of decentralised sewer treatment system in Musi catchment area, and strict enforcement of environment laws to prevent industrial effluents joining the river. A River Basin Authority can prepare comprehensive plans for River Musi development.

Musi river development should be part of Sustainable Development Goals linked Climate change Action Plan of central and State governments. River front project, as in modern models, cannot be replicated here. Government should desist from encroaching river Musi in Hyerabad city area. There should be a plan to disaggregate urban growth in Hyderabad.

Land and water linkages need to be seen and responded as such. Urban planning that integrates ecological, environmental, social and economical factors, through transparent consultation mechanisms is required.

The proposed River basin Authority shall have the following as the goals:

Any component of River front development must not encroach into the bed, except plantation and agriculture and Pisciculture. No chemicals must be used in all the above activities.

Interests of all stakeholders dependent on River Musi, especially farmers and rural residents, in villages in river basin, should have equal weightage. Misery of villagers downstream of Hyderabad, especially in Rangareddy namely Edulabad and other areas, need administrative responses on priority basis.

Increasing State and Central government coordination in responding to the challenges and concerns on River Musi. #KhabarLive #hydnews