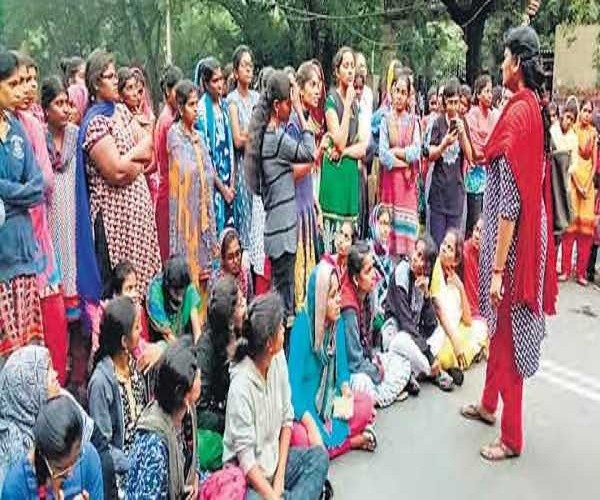 Angry over power cut in main Women’s Hostel of Osmania University, over 400 women students staged a protest in front of the hostel and administrative building disrupting vehicular traffic coming from NSS gate.

Students said that power snapped in the hostel at 9pm on Monday and returned only at 4 am the following morning, as a result of which there was no water in the washrooms and students could not attend classes in the morning. Irate women students spilled out on the streets and protested the poor facilities in the facilities.

According to inspector, G Jagan of Osmania University police station, though they were informed of the power cut the wiring problem couldn’t be rectified as the wiring was underground. “Later we arranged for tanker for the students to use. But in the morning over 400 women students staged a protest on the main road,” he said and added that most of the affected student were first students.

G Anitha, a student, told #KhabarLive that water, food, power supply and clean washrooms are the major problems that the face everyday.

“Instead of four students, one room accommodates 10 students. We have to pick stones from food before eating it. We have to ensure we use the toilets before the scheduled power cuts or there won’t be water. The condition is so bad here,” she said. #KhabarLive