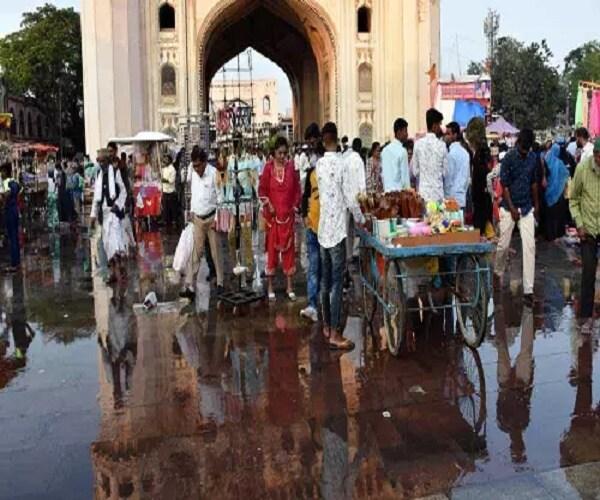 Hundreds of visitors who thronged the historic Charminar on weekend had an obnoxious welcome as the entire area was reeking of nasty stench that emanated from an overflowing drainage that left the newly laid road right in front of the monument soaked in sewerage water. Visitors in large numbers were seen struggling along the narrow pavements already crowded by vendors and beggars and had a terrible time crossing the road.

People, locals and foreign tourists alike, were seen covering their noses and muttering curses against the authorities for the poor upkeep of a tourist spot. “It has been two days since this drainage is overflowing but no one bothered to address the problem though we complained to the local authorities,” said Md Iqbal, a petty vendor near the edifice.

Frequent overflowing drain water and contaminated bore and potable water supply has become a cause of serious health hazard for the residents of Hussain Nagar colony, Darulshifa, Noor Khan Bazar, Post Office Line & Balsatty Keith under Charminar constituency for the last five months. While the matter was brought to the notice of concerned authorities multiple times, no concrete steps were taken to fix the problems permanantly.

The prevailing unhygienic condition and contaminated water has been affecting health of the residents. The BJP Minority Morcha spokesperson and resident of Hussain Nagar Colony, Mir Firasat Ali Baquri told #KhabarLive that the problem has been persisting for over the past five months,but it seems that the authorities have turned a deaf ear to it Multiple representations have been made to solve the long pending issue permanently, but nothing has been done to ease people’s woes.

“The overflowing drain in Hussain Nagar colony in Darulshifa is going from bad to worse each passing day. Though the residents are in touch with concerned authorities, but they are not serious enough to visit our localities and find a solution to this menace . Due to this, jaundice cases have risen and it has become a hub to increasing flies and mosquito menace ,” said Ali Baquri.

Residents requested concerned authorities to look into the matter and do needful to fix the problem, before it has a bigger toll on health.

“Further negligence may break into an epidemic and give rise to water-borne diseases,” Ali Baqri.

“This is disgusting, we have come here with a lot of excitement to visit the historic structure, but we never expected such a horrible condition,” said Sirisha Palvai, a degree student from Warangal who came to visit Charminar along with her friends. Water and toilets missing At most historic sites, it is not difficult to find water and toilets but not at Charminar.

Thousands of tourists visit Charminar, Salarjung Museum, Nizam’s Museum, Chowmohalla Palace and Laad Bazaar daily. Getting clean drinking water, proper toilets and encroachment free walking spaces is an issue. M K Raghavan, who participates in heritage walks in the Old City says, “If this is the condition at Charminar one can wonder how it is in slums. The government wants to increase the number of travellers to Hyderabad but if cannot provide even basic amenities why would tourists come.” #KhabarLive