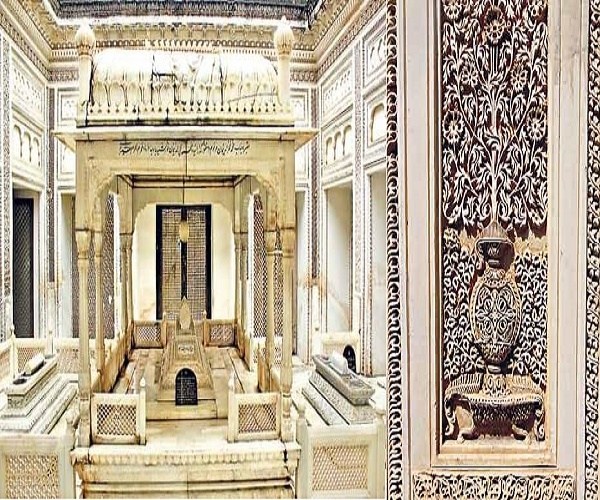 The word Paigah, which means pomp and rank in Persian, was a title given by the second Asaf Jahi Nizam of Hyderabad to the estate of Abul Fateh Khan Taig Jung Bahadur in appreciation of the royal services rendered by him. He was also conferred with the title of Shams-ul-Umra, which gives the tombs their name.

Tucked away in the quiet bylanes of the Phisal Banda suburb near Owaisi Hospital, Santosh Nagar, is an architectural marvel, a serene mausoleum which is the final resting abode of erstwhile Hyderabad’s celebrated nobility – The Paigahs.

Although the Paigahs were noted and rewarded for their contribution as army officers, ministers and aristocrats, Sir Viqar-ul-Umra is popularly remembered as the man behind one of the finest masterpieces of Hyderabadi architecture – the Falaknuma Palace. Legend has it that the 6th Nizam Mahboob Ali Khan loved the palace so much that Viqar-ul-Umra gifted it to him.

One such masterpiece symbolising the Paigahs’ love for architectural edifices are the Paigah Tombs. The spectacular beauty of the mausoleum is said to have earned it a title of the Taj Mahal of South India among connoisseurs of art and architecture. The Paigah Tombs also include a mosque where prayers are held every day.

The Paigah Tombs were constructed in the late 17th century, and later it was made a family maqbara by his son Fakhruddin Khan Amir-e-Kabir – I. Later, some additions were also made by Sir Viqar-ul-Umra, Sir Asman Jah and Sir Khurshid Jah. The tombs are magnificent structures decorated in stucco work and represented the Mughal, Greek, Persian, Asaf Jahi, Rajasthani and Deccani style of architectures.

The geometric designs in the Paigah Tombs are unique and the perforated screens are examples of the finest craftsmanship. Some screens have flowers and motifs of fruits; others have serpents, drums, and vases.

There is a great amount of effort put into the detailing of the walls, arches, pillars and even of the graves. Floral and geometric patterns are characteristic of medieval Islamic architecture.

The most striking element of the Paigah Tombs is the intricately carved teakwood doors as entrance to each tomb. The carving of the doors is so fine and so regal it only makes one wonder the way art was encouraged and appreciated in the Asaf Jahi era.

The tomb of wife of Khursheed Jah is the most beautiful of the tombs with exquisite marble inlay work. One can still see the hollows in the marble carvings where precious gems were once encrusted on the grave.

Nawab Bashir-ud-Daulah’s grave stands out with a beautifully carved marble chowkhandi which is adorned by a carved mysterious green stone. Legend has it that the lighting doesn’t strike the place where it is placed.

The Paigah Tombs are under the care of the Department of Archaeology and Museums. As one of the most marvellous symbols of Hyderabad’s rich culture and royal heritage, the Paigah Tombs deserve nothing less than the government’s attention to ensure that it is not just preserved and valued but also promoted and highlighted.

Historian Dr Anand Raj Varma says, “I don’t see much improvement and restoration taking place at the Paigah Tombs; it is in the same state for years now. If you see the entrance, it’s in a very shabby state. There is no significant deterioration but there is also no tourist attraction or promotion of Paigah Tombs either. Most people don’t even know that the Paigah Tombs are located there.”

However, says the historian, the contribution of Rahmatullah, the caretaker of the Paigah Tombs, is appreciable as he keeps it going thanks to his passion and love for the Paigah family and the tombs. “The Tourism Department or the government should take this up as a project. It is the heritage which connects us our past and to our present. It is our treasure, heritage our virasat, and it should be protected,” he adds.

Mohammed Safiullah, managing trustee of The Deccan Heritage Trust, says, “The Paigah Tombs are in desperate need for restoration as the structure is in a dilapidated state and deteriorating. Some places have grown moss all over. The government should invest in the restoration of the Paigah Tombs because there is a scope of return on investment. Once proper restoration work is done, there will be easily about a 1,000 visitors every day.”

A nominal entry ticket would become a means for generating revenue which would help in future maintenance. Simple things like a cafeteria, a souvenir shop and proper toilets could make it more tourist-friendly. #KhabarLive