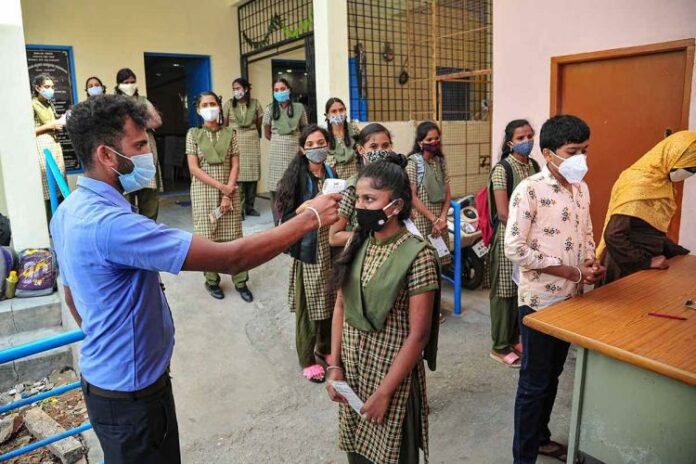 Several schools in Hyderabad have asked parents to sign ‘consent forms’ that say management takes no responsibility for health of children on reopening from September 1. Now, Telangana High Court stayed the government orders on reopening of schools. This is considered as a major relief to parents and educational institutions in the state.

The “lack of clarity” and “suddenness” with which the Telangana government has ordered the reopening of educational institutes has left parents in the state worried. And this has been exacerbated by ‘consent forms’ from three schools that seek to absolve the management of all responsibility towards children’s health.

After last week’s state government order asking all educational institutions — from kindergarten to post-graduation — to resume physical classes, several schools in Hyderabad sent forms to parents seeking their consent for children returning to schools from 1 September.

However, at least three schools also asked parents to sign a declaration, which states that the school management is not responsible for children’s health or any “untoward incident”.

In a form sent by Sujatha High School, one of the oldest schools in the city, the management asked parents to take responsibility for their child’s health.

They were asked to undersign a statement on the form, accessed by ThePrint, which read: “I declare that I am sending my child to the school at my own risk and responsibility and that I will not hold the school responsible for my child’s health.”

Delhi School of Excellence, which has branches across the city, sent out a similar form in which parents were asked to declare they are “sending their ward to the school willingly and will not hold the school responsible for any untoward incident”.

Another well-known institution in Hyderabad, the Gitanjali Group of Schools also asked the parents to take sole responsibility for their child’s health and asked them not to hold the school accountable in case he or she is infected despite the precautions taken.

“It is impossible to determine who has it and who does not given the current limits in virus testing,” read an internal circular from the school.

All three of these forms, meanwhile, also listed out the precautionary protocols the schools will be taking against Covid to keep the children safe, such as social distancing and mandatory masking.

Ashish Naredi, member of the Hyderabad Schools Parents Association (HSPA) — an independent organisation that mostly includes parents of children who attend private schools — and a parent of a Class 8 student, called the language used in the forms reprehensible.

“Parents and schools are not against each other. What we have to ensure is the safety of the children. The language used by these schools in the consent form is reprehensible. It’s like schools are shrugging off the responsibility of child’s health. How will a parent sign such a declaration form in such times,” Naredi told #KhabarLive.

ALSO READ:  Why 'Student Suicide' Is Such A 'Sensitive' Subject?

When #KhabarLive reached Delhi School of Excellence via call and Gitanjali Group of Schools over email for a comment but received no response till the time of publishing of this report. Sujatha High School, meanwhile, declined to comment over a phone call.

No response was received from Hyderabad District Education Officer R. Rohini either, when reached over text message and call, till the publishing of this report.

Parents of school children have also criticised the lack of clarity in the state government order calling for reopening of schools. Unlike other states, the K. Chandrasekhar Rao-led government has not designed a formal modus operandi for the resumption of physical classes.

The Telangana government released a memo on 24 August announcing the reopening of educational institutions. On the same day, in another circular, the government released a list of basic Covid protocols to be followed which included sanitising premises and taking symptomatic children to healthcare centres. No other protocols specific to resumption of schools have been released yet.

According to Seema Agarwal, another member of the HSPA, “No clear instructions are given to the parents. It is left to their whims and fancies on how they want to operate.”

She further noted that a survey conducted among 300 parents of the association, revealed that about 87 per cent of them were not willing to send children to offline classes.

“I am actually surprised how the government just said that all institutions can re-open without listing out some detailed guidelines. I think the first step before calling any child to school is making sure all teachers are vaccinated, at least with first dose,” Naredi said.

Meanwhile, It is known that the Telangana government has decided to reopen schools and colleges in Telangana from tomorrow after a halt for a long time. However, the Telangana High Court on Tuesday ruled that the opening of schools is not mandatory and imposed a week-long stay on the Government Order.

The High Court said that students need not attend classes in any of the public schools or private schools.

The High Court has also ordered that no schools should force the students to come to school and also asserted that the management should not take any undertaking from the parents regarding the Covid-19. The High Court agreed with the petitioner that there is no scientific study to start the schools. It remains to be seen how the government would respond to the High Court order.

The High Court heard the Public Interest Litigation (PIL) filed by private teacher Balakrishna against the direct teaching to pre-primary and primary classes in the schools. The petitioner contended that direct teaching was inappropriate amid the coronavirus third wave thread.

The petitioner alleged that the government has decided to start educational institutions without any scientific study and guidelines. The High Court heard the case on Tuesday and stayed the re-opening the schools.  #KhabarLive #hydnews