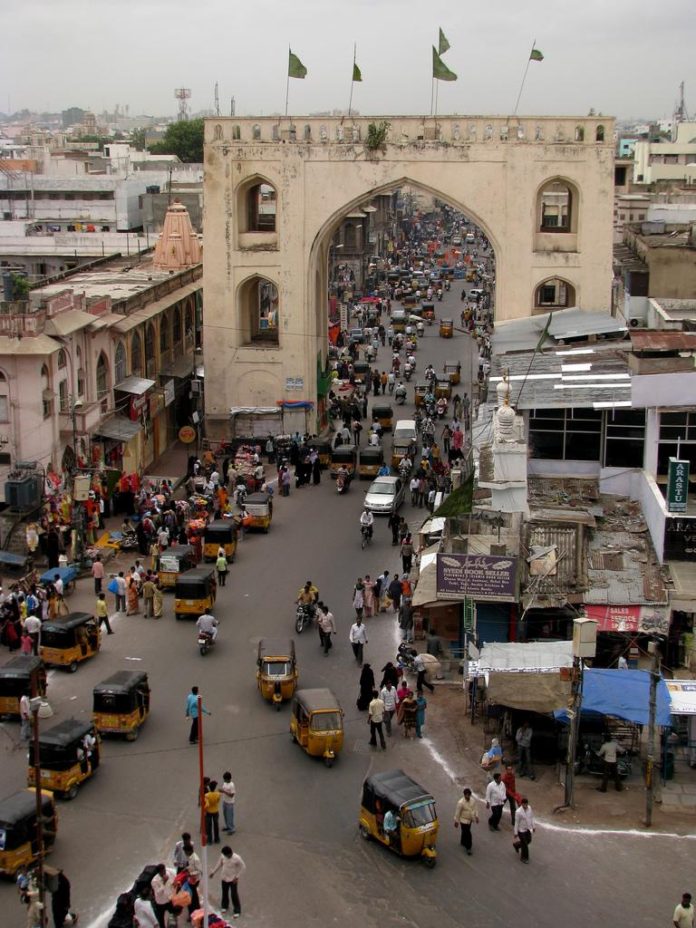 Pathergatti, the historic bazaar of the city located near Charminar, is a renowned market for pearls and jewellery besides being a perfect place for wedding shopping. One would find a torrent of traditional and designer sarees, bangles, bride and bridegroom costumes here.

Most of the shopping is done on the footpaths for huge bargains. Shops display their stock under glittery lights to suit the choice and need of the customer.

The Sunday bazaar of Pathergatti thrives hale and hearty and is a haven for antique lovers. Nearly 300 stalls are set up on the roadside stretching from Charminar to Pathergatti. The range of items available at the market is vast. One can get everything from chandeliers to watches and bronze statues to modern equipment. Anything from batteries, mobile phones, chargers, head phones, tape recorders, pens and gems to stoves, frying pans and knives can also be found here.

Bronze and wooden statues, old gramophones, night lamps and other antiques catch the people’s fancy than any other ordinary item. The best part of the market is that all the products are inexpensive. Stall owners say that even scholars and researchers arrive at the stalls to gather information and buy some antiques. While the locals can be found haggling, foreign tourists do not bargain and buy the items at the offered price.

History
The Patherghatti stone arcade buildings on either side of the road, between the Madina Hotel and Chariminar, were built in 1911 by Mir Osman Ali Khan, the seventh Nizam of Hyderabad, who ruled Hyderabad from 1911 to 1948. He constructed the two storied red granite buildings, with shops in the ground floor and residential houses on the first floor, for the convenience and safety of the merchants and their merchandise.

It was one of the projects of the City Improvement Board set up by the Nizam during his rule. Much of the original appeal of the buildings is lost due to the haphazard installation of signboards, hanging cable wires and unbridled growth of tree branches. However, the pearl trade still does a roaring business at the Patherghatti shops.

ALSO READ:  How The 'Hyderabad Police' Pushing To Make The City 'Beggar-Free'?

According to historians, the Pathergatti stone arcade is credited with one of the widest bazaars in India and perhaps this fact had given designers enough reason to construct an intricately crafted structure with explorative eyes. Over the years, the true beauty of the structure has lain hidden under the commercial interests of the people in that area. This has gradually led to the under-appreciation of the architectural and sculptural masterpiece, which is undoubtedly without parallel.

Conservation
The intention behind conservation of the structure was to unearth hidden architectural worth and beauty of the Pathergatti stone arcade. The value of the stone arcade, just as that of the four Kamans, lies in its geometry that stretches over 400 metres. This suggests that one arch individually might not be as important for consideration of conservation as a set of ten arches together might be.

As a conclusion of the whole physical and historical documentation process it can be said that conscious geometrical principles such as those of symmetry, repetition, hierarchy, rhythm and, of course, axis were followed in the conceptualisation of its original design. The first step of the urban design proposal was the conservation of the stone arcade (interior and façade, both physically and visually), which was initiated in December, 2010 along with street scraping works.

Problems
An effort to develop the area, to ease the traffic and to reduce pollution levels under Charminar Pedestrianisation Project (CPP), which was envisaged 15 years ago, has begun to take shape.

Mayor Mohammed Majid Hussain, speaking about the CPP, says, “We will restudy the CPP blueprint and chalk out plans to resume works. First priority is to provide approachable roads to the monument and also strengthen alternate routes. While a few properties have been acquired, we are negotiating with those remaining. There is no problem for funds and it will be drawn from the Jawaharlal Nehru National Urban Renewal Mission (JNNURM) and the GHMC. Now we are set to resume the works at the earliest.” #KhabarLive