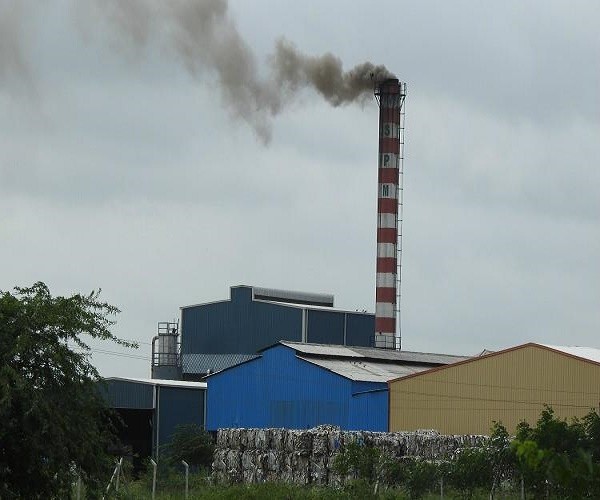 Around 15 pharmaceutical companies located in a radius of 3 km, the factories are proving to be a nightmare for the residents of Sangareddy. The Gundlamachnoor Model School in Telangana’s Sangareddy district is located on a hillock. The school got a new building, painted in brick-red, only three months ago. It has 466 students, while the intermediate college by the same name has 115 students.

The first night after the new building was reopened, a few teachers decided to stay back to set up the place – but they were in for a rude shock. The school is surrounded by a string of pharmaceutical factories, and the staff and students found that these enterprises leave their vents open at night.

The effect of the fumes in the air has been apparent in the school for a long time, however. “Children with less immunity often fall unconscious in the school, feel dizzy and even vomit during class hours,” says Mohammad Rafi, the school principal. “The smell is worse at nights as the factories open their vents and release gases,” he adds.

Sangareddy, located around 65 km from Hyderabad, is the pharma hub of Telangana. With around 15 pharmaceutical companies located in a radius of 3 km, the factories are proving to be a nightmare for the residents of the district. In Borupatla village alone, there are nine operating units of Aurobindo Pharmaceuticals, one of the biggest pharma giants in the district.

The situation at the Borupatla village school is similar to the Gundlamachanoor school. The state had allocated land for the government school in the village, and the building falls within a 1 km radius from Aurobindo pharmaceuticals. The unbearable stench from the factories has been causing nausea, headache and vomiting among the children, for whom shifting to another school far away from their village is not a viable option.

“We experience the stench mostly in the morning or afternoon when the wind blows in this direction. Many a time, students have fainted during or after the morning prayer at 9.45 am. If there is stench during lunch, it is nauseating and we have trouble swallowing our food,” a student at the village school says.

“We have spruced up the school and renovated the classrooms but we have not been able to do anything about the smell. Being government employees, we stay for a year and leave, but the children continue to be at the receiving end of this problem. We are helpless as many of the children’s parents work at the factory,” the principal of the school says.

At the Telangana model school at Gundlamachanoor, the government is also planning to start a hostel adjacent to the school, for girls in the 11th and 12th standards, to reduce dropout rates after Class 10. But with kids falling sick too often, the school authorities are also at their wits’ end.

This is the only government-run English medium school for the entire mandal. This means that unlike Borupatla, where only children from that village are affected, here children from across the mandal breathe in the toxic air. Here too, several locals work in the nearby pharma factories and do not want to lose their jobs.

From farmers to students, the loss in terms of material and health is irreplaceable. While polluted groundwater and effluents from the factories are making farming impossible, no concrete measures have been yet taken to address the issue on ground, this despite a number of complaints filed against these factories.

With toxic chemicals and gases released into the water and air, the farmers of Sangareddy have not been able to grow crops in many years. While many of the villagers have been employed in a couple of factories around, a handful are still dependent on the yield from the land. Frothing water, arid soil and withered plants have made agriculture a non-profitable business in the land.

People from the nearby village were reluctant to speak up as many of them have been provided with employment at the factories.

Shankariah, a farmer in the Borupatla village, wears a worried look as his crops have failed for the second consecutive year. While his neighbours received water from a local lake, he was forced to use underground water as he did not have a water connection. And the groundwater, which was allegedly polluted due to chemicals from a pharma company nearby, ruined his paddy crop, leaving him in severe debt.

“We often read of farmers killing themselves in Telangana and always thought it was a distant reality for us. However, sometimes when I think of my own situation, I just want to kill myself,” the old man says.

He approached the sarpanch of the village, who in turn wrote to the factory’s management, stating that the groundwater was ridden with chemicals and that it spoiled his crops. Despite this, he alleges that the factory has neither done anything for him nor compensated him.

According to the National Air Monitoring Program, the air quality index (AQI) for Sagareddy is 75, which falls under the satisfactory category and may cause minor breathing discomfort to sensitive people. But the concentration of carbon monoxide in the air is at a record 400 micrograms per cubic metre, which can cause respiratory problems, even among healthy people, and serious health impacts on people with lung and heart diseases.

A pertinent question one needs to ask here is the state’s callousness in allocating land to build schools near pharmaceutical factories. The immediate effect of these factories on the children may seem negligible, but in the long-run, the villagers of Sangareddy are staring at an impending health hazard, health experts say.

According to Dr Kishan Rao, a doctor and a member of the Patancheru anti-pollution committee, health hazards among the people in Sangareddy are many.

In 1991, villagers and activists waged a war against the polluting factories in Patancheru, another village in Sangareddy, and filed a case before the Andhra Pradesh High Court the same year. The final verdict of the case was given in 2017, restricting the factories from expanding their bases and setting norms for factories located on the inland surface water.

“Around 15 years ago, we had a girl who was born without eyeballs. Since then, we have even had blue babies, which are an after-effect of excessive nitrates that travel from the soil to the cell, to people who have allergies and bronchitis. According to a study done by the Indian Institute of Medical Sciences, the arsenic content in the soil is extremely high, which has increased the cases of cancer in the district,” Dr Kishan says.

Despite several attempts by #KhabarLive to contact the local MLAs to understand why a relocation of the government schools is not possible, the leaders kept passing the buck from one person to another.

Aurobindo pharmaceuticals spokesperson also did not respond to the repeated queries from #KhabarLive.

Bhadra Girish, an official with the Telangana Pollution Control Board, on the other hand, says that strict norms have been put in place and factories like Aurobindo are no longer discharging liquid wastes into its surroundings, and instead blames residents.

Speaking to #KhabarLive, he says, “We have constructed pipelines that discharge the treated effluents into the Musi river. Nakka Vagu river, which ran along Sangareddy, was earlier the dumping ground for these factories, which resulted in severe contamination of the groundwater. Even now, water froths and the land has become unsuitable for cultivation, but this is due to the sewage dumped into the river bodies from the residential areas around the Ramachandrapuram and Patancheru mandals.”

Talking about the health hazards, Girish says, “In 2009, researchers at the Osmania Medical College conducted a study on the permanent health hazards in Sangareddy district, but in vain. They could not come up with any significant conclusions. The health issues that people in Sangareddy now face are the result of the characteristic odour produced by the factories. As the government is putting stern rules in place, any health hazard of a larger nature does not seem viable.” #KhabarLive