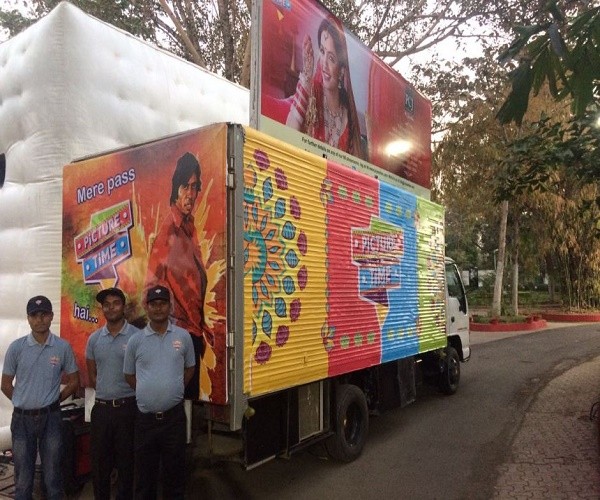 Cinema goers watch Bollywood movie “Dilwale Dulhania Le Jayenge” (The Big Hearted Will Take the Bride), starring actor Shah Rukh Khan, inside Maratha Mandir theatre in Mumbai December 11, 2014. The movie, released in October 1995, has set a record of completing 1000 weeks of continuous screening at a cinema, a feat unmatched by any other Bollywood movies.

According to Manoj Desai, owner of the theatre, the movie, which is still being screened, enjoys at least 50 to 60 percent occupancy on weekdays and full house on weekends at his theatre. The movie is screened only in the morning and the ticket price ranges from 15 to 20 Indian rupees ($0.24-$0.32). Picture taken December 11, 2014.

The multiplex revolution may have transformed urban Indians’ movie-watching experience, but for those living outside big cities, catching the latest Hollywood, Bollywood, or regional film in a cinema hall is difficult—sometimes impossible.

Unlike the US and China, which have over 40,000 movie screens each, India has just about 9,000. These include single-screen theatres and multiplexes, most of which are concentrated in the largest 30 cities. So, a country of over 1.3 billion people still has countless small towns and villages a world away from the nearest cinema.

This, in turn, has meant that despite producing the most number of movies in the world every year, Indian cinema’s revenue pales in comparison to that of the US and China. In fact, movies like the 2016 Aamir Khan-starrer Dangal actually made more money in China than they ever did in India.

In 2013, this dire lack of movie screens caught the interest of Sushil Chaudhary when he was looking to return home after years of working in South America for Mann-India, the IT company he had co-founded with three of his college friends.

Chaudhary wasn’t looking to launch his own chain of movie theatres, though. After all, real estate costs in India are painfully high, and, what’s worse, it takes around 70 different permissions to set up a theatre.

Instead, he decided to go mobile.

“One day the idea came to my mind, why can’t I have a portable cinema theatre on a small truck, but without compromising on audio or video quality,” the 43-year-old told Quartz. “I wanted to give the multiplex experience to people of tier-3 and rural parts (of India).”

He launched PictureTime at the International Film Festival of India (IFFI) in Goa, in 2015. Today, his firm operates 10 trucks, each containing the materials for an inflatable movie theatre that can be set up pretty much anywhere. These theatres are fully air-conditioned, boast of Dolby 5.1 surround sound, and can seat up to 150 people each. Importantly, they’ve been able to screen the latest hits, from Baahubali to Padman, for audiences in small towns and villages in states like Karnataka, Chhattisgarh, Bihar, Jharkhand, and Maharashtra, which may not have otherwise got the chance to watch them.

“If you look at tier-3 cities, the entertainment options there and in rural areas, they have nothing,” Chaudhary explained. His vision, he added, is to create entertainment zones centered on the mobile movie theatres where people can come and watch films and just hang out, taking advantage of the wi-fi hotspots on offer.

Since it began commercial operations with four trucks six months ago, PictureTime has generated around Rs1.8 crore ($277,020) in revenue, Chaudhary said. And it’s targeting Rs50 crore by March 2019.

Last month, the company raised Rs25 crore in a pre-Series A funding round led by the chairman of CX Partners, Ajay Relan. It plans to use the money to dramatically increase its production of mobile digital movie theatres, all based on Chaudhary’s original design (patent pending) created out of a garage in Delhi.

Chaudhary began designing his prototype in April 2015, envisioning an enclosed, air-conditioned space with a 16 feet-by-7 feet screen that could be set up in around two hours. With the help of a small team, it took three months and an initial investment of about Rs3 crore to build a working prototype.

After launching the prototype at IFFI Goa in November that year, he embarked on a nationwide pilot, taking it to rural areas in Chhattisgarh, Uttar Pradesh, Andhra Pradesh, and other states. Encouraged by viewers’ response, he decided to find a way to bring the latest releases to his portable screen.

“This was the most difficult milestone and it took us almost five months to convince some of the biggest distributors and production houses,” he recalled. Luckily, notable directors and producers such as Aditya Chowksey and Shobu Yarlagadda were intrigued by the idea. Subsequently, PictureTime was given permission to screen the Telugu blockbuster Baahubali, produced by Yarlagadda, in rural areas.

Since then, the company has grown to 30 employees and is now readying 100 new trucks. It plans to set up a factory that will eventually produce 200 vehicles every month. The goal is to have 3,000 of them operating between the next three and five years.

So far, PictureTime has screened new releases like Tiger Zinda Hai, Tubelight, When Harry Met Sejal, and Toilet Ek Prem Katha. Each truck is assigned a district within which Chaudhary and his team pick a handful of locations depending on the size of the population. Screenings are organised every day. Most importantly, the tickets cost just between Rs30 and Rs50, a fraction of the price charged at big-city multiplexes.

“I really want to make it affordable, I don’t want to increase the price above Rs50 at any cost,” Chaudhary said.

But then, that is what makes his business complicated.

Money matters
While the idea makes sense, turning it into a sustainable business isn’t easy, according to Girish Menon, co-head for media and entertainment at KPMG India.

“The challenge always has been economics. It’s not that a PVR is averse to setting up a screen in a small rural area. It’s just that the cost associated with it and the returns do not make sense,” Menon told Quartz. “Once you go below the major metros, 25% is the average occupancy and if you go into smaller cities, you will struggle to get that number.” And while a mobile movie theatre may require much lower capital expenditure than a multiplex, operating expenses are still high, making it tough to run the business at scale and at reasonable price points, he added.

Chaudhary argues that PictureTime has seen occupancy rates of between 50% and 55% on average, which is better than the Indian multiplex average of just 30%. His company’s operating expenses, he said, are a third of the multiplexes’.

But he does acknowledge that the business is rife with challenges.

To begin with, PictureTime isn’t alone. Caravan Talkies, created by film distributor UFO Moviez India, also offers a movie-on-wheels experience with 115 vans deployed in states such as Uttar Pradesh, Bihar, West Bengal, Rajasthan, and Odisha. Then there is the issue of negotiating all the regulations, and convincing investors that a portable movie theatre can work in India.

“Now people are investing money in the business model, but when I started, they were very suspicious,” Chaudhary said. This year, his firm plans to do another round of funding to generate around Rs150 crore to build its factory. The idea is to move the country closer to the cinema-screen density it needs.

“India has the scope to accommodate up to 60,000 theatres, and we need those cinema theatres,” he said. #KhabarLive